After the Richmond City Council meeting of July 1, I experienced one of the most intense and hostile encounters I have had to endure as a public official and in my entire life for that matter. Since then, there has been at least one news report and a series of deliberate misrepresentations of what took place that night.

It is not my intention to respond to false accusations raised or dignify the insults with a response. They are politically motivated and come from people who have made clear that there is no low they will not sink to in order to get their way. This is evident in their attacks on me as a progressive, as an African American Latina, and as a queer identified woman.

When I discuss issues of substance, I am interrupted. I am attacked personally with racial and homophobic slurs by individuals and groups who are threatened by a progressive agenda to provide opportunities for building and enhancing a community that can and will transform Richmond for the better for everyone.

They attack because they have no program for Richmond. (Kenneth Davis, who led the hostile encounter on July 1, is a competing candidate for City Council – ed.)

It saddens me that a handful of people and two council members would, through their actions, sabotage programs to help the formerly incarcerated, youth, immigrants and public health.

It is common knowledge that Richmond Council meetings have gotten so bad that many people have stopped attending or watching. Or worse, some see them as entertaining melodrama in the way of reality TV shows.

I regularly hear from constituents that they will not come to council meetings because of what has become an accepted pattern of harassment and insults both from the dais as well as in the audience. They no longer see council meetings as a place where their concerns can be voiced.

Some people have even said they were fearful of leaving the chambers alone after having been verbally attacked for statements they made. I am especially concerned for all of our young people. When LGBTQ youth came to be honored by the Council, they were taunted, disrespected and made to feel unwelcome.

I am intent on doing something to change that poisonous atmosphere. 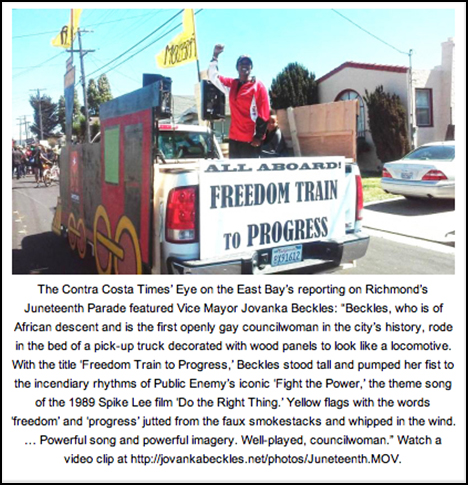 On July 1, I had an item on the agenda to direct staff to explore how to bring order and decorum back into the council chambers. The item is designed to explore how to most effectively create a space in which more of the public can feel welcome to come to meetings to express their concerns. (That proposal was passed at the next meeting; see below – ed.)

I believe passionately in the hard won right of free speech, and I would never propose something that would limit the right to speak based on an individual’s point of view. But, free speech does not cover acts of disruption of meetings that prevent public members from participating.

Neither does it cover actions of bullying, threats and personal intimidation. In fact, the First Amendment does not protect these “fighting words.” The U.S. Supreme Court has held that “insulting or ‘fighting words,’ those that by their very utterance inflict injury personally or tend to incite an immediate breach of the peace” are among the “well-defined and narrowly limited classes of speech the prevention and punishment of [which] … have never been thought to raise any constitutional problem.”

The only way to reclaim the City Council and the chambers is to demand that the elected officials and residents who participate in the public process be accountable.

So, I need you to tell your stories. I can continue to speak on your behalf. But, when you don’t speak up for yourselves, it just gets written off as politics. I invite you to let us know that you expect and insist that the attacks and abuse of both public officials and audience members end and that respectful decorum is reinstated.

You can write the council members at:

Additionally, Contra Costa Times Letters to the Editor can be sent to [email protected].

Richmond Vice Mayor Jovanka Beckles, also a member of the Richmond City Council, works full time as a mental health specialist for Contra Costa County. She was born in Panama City, where she grew up in a bilingual, multicultural household. Her parents moved to the United States in1972, and she has lived in Richmond for the last 13 years. She can be reached at [email protected].

What motivates the bigoted bullying?

At its July 15 meeting, the first after the highly contentious July 1 meeting, the Richmond City Council, following more dissention, “finally voted to approve Beckles proposal, asking city staff to explore options for addressing council rules on handling disruptions,” according to KTVU, with only Councilmember Corky Booze voting no. Booze is usually aligned with Richmond refinery owner Chevron, which, before the Richmond Progressive Alliance’s successful challenge, ran Richmond like a company town.

“Chevron running slick campaign to control Richmond” is the title of an op-ed by David Helvarg published by the San Francisco Chronicle on July 18 that begins: “If the Supreme Court is right that corporations are people and money is free speech, then Chevron is the biggest loudmouth in Richmond, where I live.” Helvarg is executive director of Blue Frontier, an ocean conservation and policy group.

“Chevron wants to get rid of our Green Party mayor and progressive City Council majority because they’ve challenged the company on property taxes and pollution. That’s why in 2012 Chevron spent $422,000 backing a single candidate for one of the seven council seats that pays $16,830 a year. The company wants to return to the days when the council majority was known as the ‘Chevron 5.’

“In August 2012, there was a fire at the refinery. I took pictures of the billowing black column of smoke while 15,000 other people went to local hospitals complaining of burning eyes, nausea and trouble breathing. …

“Now Chevron wants to assure me that things are better, and we should all be ‘Richmond Proud.’ That’s the name it’s given a multimillion-dollar PR campaign of billboards, T-shirts, tote bags, mailers, robo-calls, highly publicized charitable contributions, a local newspaper it created, and TV ads. Phase one of the campaign was all about being proud of our parks and waterfront and youth opportunities, which all expanded under the progressive City Council that Chevron wants to get rid of.

“Then I attended a Richmond Planning Commission meeting on the company’s billion-dollar refinery modernization plan, which the City Council could vote on this month. A contingent of folks showed up in blue and white T-shirts reading ‘A Modernized Refinery. Another Reason to be Richmond Proud.’ I couldn’t help noticing that while 80 percent of the folks in the pro-Chevron shirts were white, 69 percent of Richmond’s population is not.

“Now in PR phase two, the billboards, TV ads and mailers are telling us how good this plant modernization will be for Richmond. Unfortunately, the $1 billion for the refinery upgrade will not be spent in the part of the facility that caught fire but on a hydrogen plant that will allow the company to burn higher-sulfur-content petroleum from places like Iraq. This could increase air pollutants 24 percent and greenhouse gas emissions 16 percent, by one reading of the company’s environmental impact report.

“Chevron, which will probably make barrels of extra money burning this ‘sour’ oil, insists there will be no net increase in pollution, thanks to new and innovative approaches like carbon trading. But even reducing greenhouse gas emissions from an oil refinery is like reducing gun violence at the Colt firearms factory. It misses the point.

“Richmond has double the childhood asthma rate of Marin County just across the bay. California is experiencing a historic drought and forest fires linked to climate change brought about by carbon pollution. It’s become a product liability issue. Chevron’s product, used as directed, overheats our planet.

“When I asked the company how much it planned to spend in this fall’s city elections (that would include phase three of their media blitz), I was told the company hadn’t decided yet but would support candidates committed to public safety, job creation and other boilerplate.

“Richmond Mayor Gayle McLaughlin didn’t mince her words, however. ‘We get all their pollution not only in the air, but they pollute our elections, too. If they’d reduce their emissions and withdraw from our elections, they’d be respecting our health and democracy.’”

Bigoted bullying seems to be the part of the plan to restore a Chevron-controlled City Council that is aimed at defeating Councilmember and Vice Mayor Jovanka Beckles. Most Richmond voters, however, are not easily fooled, especially since the August 2012 Chevron refinery explosion and fire demonstrated Chevron’s indifference to the people of Richmond.

Most Richmond voters – especially youth, people of color, queer people, immigrants and progressives generally – feel a special kinship with Beckles and are expected to vote to keep her on the council in November.

This article is reposted from San Francisco Bayview