Local Restaurants: Cafe by the Bay 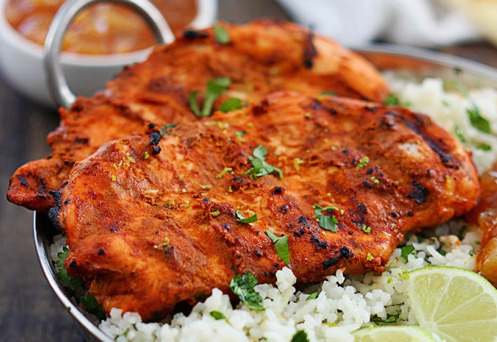 A little restaurant is making a big splash in Richmond. The city finally has its own Indian restaurant, and it’s really good.

The new spot, Cafe by the Bay, has been open for less than ten weeks now, but word has spread quickly on social media about the flavors and hospitality at the restaurant. The owners came upon their Richmond location almost by chance, but if their opening weeks are any indication, it looks like they’ve found themselves a new home.

Cafe by the Bay was full of regulars – surprisgly both new and old – during a recent lunch hour. “I’ve known Nimmi and Kamal for a long time —about 15 years at this point,”explained one customer, Bruce Lyons, as he tore into a hunk of volcanic-red Tandoori Chicken.

In the early 2000’s Kamal and Nimmi, the married couple that started Cafe by the Bay, were running a small take-out Indian restaurant in San Francisco when Lyons happened upon their place. He became a regular, built a relationship, and now the line between customer and friend is a little unclear.

“I say he’s our business partner, but he denies it,”says Nimmi jokingly. She’s a little shy and reticent when talking about her restaurant.  To her, it’s just food —it’s what she does. But to Lyons and the other patrons, the flavors and craft behind the food at Cafe by the Bay make the restaurant more than just another lunch spot: it’s a destination.

Stopping by during their lunch buffet is the best opportunity to get acquainted with the breadth of what’s offered at Cafe by the Bay. Vat after vat of curry —eggplant, lamb, mixed vegetable, and more —line a long buffet table in the back of the room. Diners are welcome to eat as much as they like and, considering that it only costs a little under $10, it’s a pretty good deal.

Rather than filling your plate with a heaping pile of one single curry, try a little bit of each and see which you like the most. Nimmi and Kamal bring flavors from the Assan region of India, near Bangladesh, to their food, which means that it’s a little spicier and meatier than typical Indian restaurant. For fans of spicy food, this can be a good thing.  To those with more delicate palates, it might be wise to start slow.

The food is a huge draw, while the restaurant itself in a bit of an odd location. Dimmi and Kamal lease their space from the hotel at Canal and Cutting Boulevards, right behind the gas station there.  It can be a little hard to find at first, but once you’re in, the restaurant immediately feels familiar.  A hearty aroma of spice and sweetness fills the air and past the sprawl of tables a large TV plays Bollywood music videos.

All of this culminates in an atmosphere that feels comfortable and homey, yet buzzing with excitement. Nimmi is often seen bustling from one table to the next, pouring water and making sure that everyone is satisfied. This sort of hospitality —and the unique flavors of the food —make Cafe by the Bay a standout restaurant.