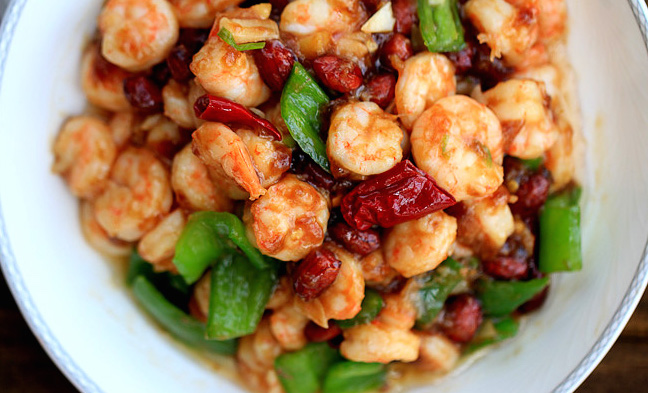 Just about everything you need to know about Point Richmond’s Little China is in its name. The restaurant is, in fact, little, and it serves Chinese food. The quaint restaurant is a staple of the neighborhood, and it has become a must-have for diners looking for a quick, affordable meal.

Little China’s lunch special is one of the best around. For $6.50 diners get a bowl of soup, a salad, an egg roll, and an enormous entree that could easily serve two.

The salad, soup, and egg roll came out so quickly after ordering that one has to wonder whether it’s all preprepared or if the servers are really that fast. The quality of the food implies the former.

The soup was tasty — no doubt about it. It was a sweet and sour egg drop with slender pieces of tofu floating through the amber broth. Something about the soup, though, was a little too syrupy, as if it had been cooking a little too long and the water had all but disappeared from the broth. But, that said, the flavors were all there. It was at first delightfully sweet, which melted into a light tartness before bringing on a good level of spiciness. If it weren’t for the consistency, the soup would have been devoured in an instant.

The salad and egg roll were nothing to write home about, but the main course — hunan prawns with steamed rice — was a different story.

The heaping plate of broccoli, onion, shrimp, and rice came out in a swirl of steam and aromatic spice. The piping hot broccoli absorbed the flavors of the spicy hunan sauce, onion, and shrimp, making it the one of the most flavorful parts of the meal. The shrimp, too, was tender and tasted fresh. The dish was exactly what one hopes for in a hunan shrimp meal, which is to say that while it tasted great, it was nothing special.

That was a theme of Little China. Everything was exactly what one expected it to be, but not much else. The walls are plainly decorated with faded water color paintings, hanging plants, and the occasional cobweb. The food, while tasty and filling, didn’t stand out in the crowd of similar Chinese restaurants.

The wait service was nice, but not particularly present or charismatic. I tried to get some history or backstory from my waitress, but she shyly evaded my questions.

Little China was good, truly — but it wasn’t great. It’s a meal that I would get for take out, but not one that I’ll find myself craving again and again. Next time you want a simple, reliable meal, Little China might be your spot.

Update 6/14/15: This article originally had listed the name of the restaurant as "Little Panda." Thanks to Gina Oceguera and Mindy Pines for catching our mistake.