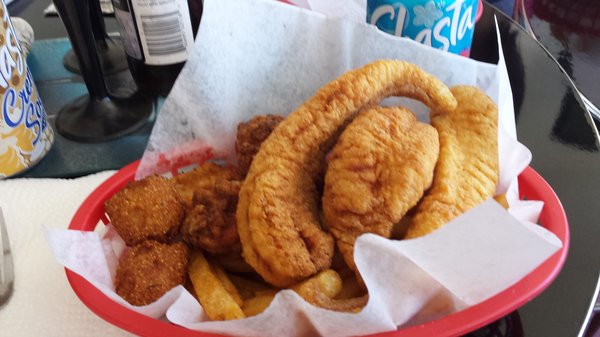 Mississippi Catfish will surprise you. While its name makes it seem like typical fried fish shack, the quality of the food and the heritage of the recipes bring it to a higher level. The owner, Thomas Wright, may seem a little brusque at first, but he is so friendly and welcoming that you'll quickly understand how his restaurant has stayed open for over two decades.

Mississippi Catfish has been serving southern food in the city for a while now, but it didn't actually have a building of its own until about seven years ago. Before then it was just a food truck in a parking lot, but even in this early form the restaurant drew an expansive and loyal crowd of diners who happily waited in line for the opportunity to eat the most authentic southern food around.

Wright opened up his fried fish shop with a simple mission. "I just want to give people a taste of Mississippi," he says. Wright has lived in Richmond for over two decades, but he originally hails from Kansas City, Mississippi. He isn't the type of guy to flaunt the roots of his cuisine, either; he just cooks. But when he gets to talking about his southern background, Wright lights up and it's clear that he feels deeply for the heritage surrounding the food he serves.

Just one taste of what comes out of his kitchen and this much is clear. Crispy, golden brown catfish and moist hushpuppies with steaming hot insides are easy staples of the menu, but there are also more unique southern items like fried prawns, lemon cake, and snapper. A single critique is that the portions could be larger. An order of catfish with a side of greens should be plenty to keep diners stuffed for hours, but ordering just two items wasn't quite enough. On the bright side, this just means that diners will have to order more items from the expansive menu of consistently delicious items in order to achieve a full stomach.

Wright's dedication to his craft can be thanked for the ridiculously mouthwatering offerings of this fried fish joint. Though Mississippi Catfish isn't a pretentious, high-end restaurant, they don't skimp on the quality: all of the catfish served is farm-raised and grain-fed in Mississippi to ensure consistent quality and authenticity. The recipe for the breading, too, was homegrown in Mississippi.

While enjoying a meal at Mississippi Catfish it's not uncommon for Wright to come out to his customers to chat and joke around. If you're lucky, he might even offer you a sample of the BBQ ribs, too. When you stop by Mississippi Catfish, it feels like stepping right into a southern kitchen. Take one bite into the catfish, and it's almost like you're actually there.