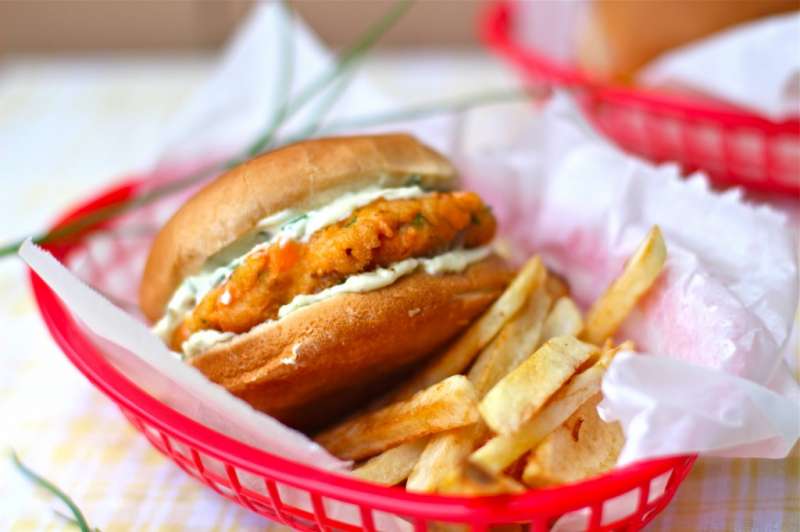 The Red Onion is simple. Fresh burgers, crispy fries, tasty milkshakes: diners know exactly what they’re getting, even if they’ve never been there before. It’s this familiarity and quality that have established the burger joint as a premier place for a hearty (if unhealthy) meal for over 40 years.

“I think people like the family atmosphere here,” says the owner of the Red Onion, Sylvia Figueroa, of the restaurant’s success. “Oh, and the food is excellent.”

The food is simple, but it is, truly, delicious.

Their salmon burger, for example, is fresh and stacked with enough toppings for two burgers. It’s almost too big to take a bite out of between the globs of mayonnaise and mustard, stack of crisp spinach leaves, and the thick salmon patty. But the burger is worth it, once it’s wrangled. The salmon is savory, with a crispy outside and steamy inside.

The restaurant is housed in a small building tucked under the BART tracks on San Pablo Avenue. The restaurant is so small, in fact, that it would almost be hard to find if everyone didn’t already know where it is. And, indeed, during a recent lunch hour it appeared that everyone knew how to get there. The tables and bar of the restaurant were packed with one diner after another stuffing their faces with the enormous burgers.

It might be that the Red Onion’s busy, grease-fueled lunch hour is a little too fast-paced for the staff there. The few empty tables in the restaurant were still greasy with the smears of burgers past — a sign of good business but bad hygiene.

The Red Onion feels like something out of a different era, with white and black checkered tiles on the floor to the Coca-Cola wallpaper, and surprisingly low prices ($5.50 for a burger in 2015 seems unheard of).

“We like to keep it traditional,” Figueroa explains. “We’ve tried to keep things like they’ve been since the restaurant opened.”

Figueroa started working in the kitchen at the Red Onion almost 40 years ago, and then took ownership of the establishment after ten years on the job. “It has been nice to see the restaurant continue to thrive,” she proudly says as she surveys the restaurant. The Red Onion is a small kingdom, but it sure is a tasty one.

For close to 50 years now people from Richmond, El Cerrito, and San Pablo have flocked to this slice of delicious Americana because they know it will delivery exactly what they want. Tasty burgers, a friendly environment, and a good time that won’t hit the wallet too hard — the Red Onion is a classic.