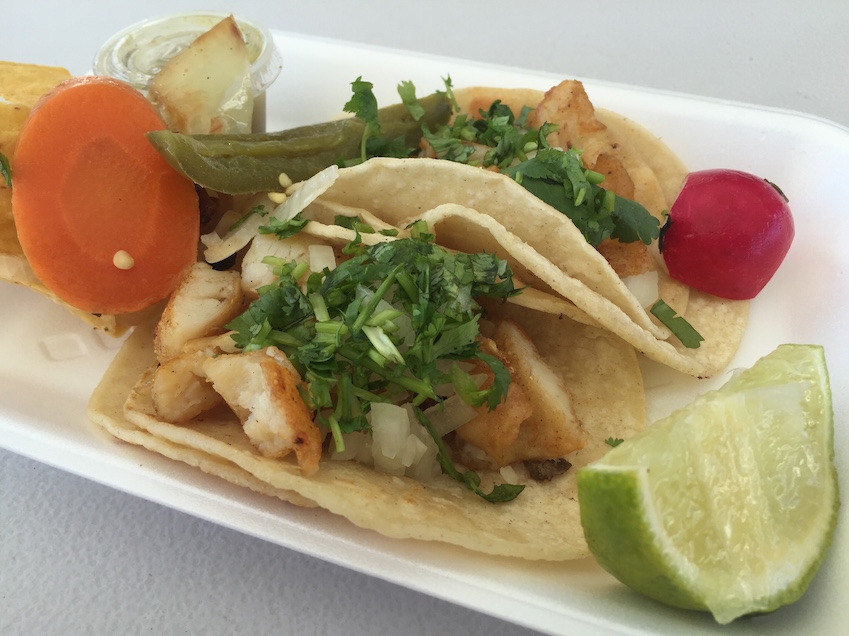 For those in search of the ultimate Taco Tuesday destination, the Taqueria El Agricultor taco truck might just have you covered. The small taqueria on wheels has some of the best prices, tastiest flavors, and fastest service around. This all adds up to a great meal, if you don’t mind inhaling a fair amount of vehicle exhaust that lingers around the truck.

The secret is out about Taqueria El Agricultor. Even before noon strikes, the bustle of workers in want of an inexpensive, tasty meal is out in full force. Work pants, suit jackets, and the casually dressed passerby can all be seen revolving through the taco truck in quick succession. It’s no wonder why such a diverse variety of patrons flock El Agricultor. Usually no more than five minutes pass from the time one places their order to when they receive their food, making a lunch there one of the fastest in town.

El Agricultor’s price point doesn’t hurt either. Their tacos, which run a little on the small side, are just two dollars apiece. This makes it easy and cheap to try their variety tasty tacos.

For the diner unsure of which taco to order — carnitas, chicken, lengua, or something else? — their fish tacos are a consistent and easily accessible choice. They come out in a double layer of soft corn tortilla with tasty, lightly breaded fish piled high and topped with pickled vegetables. Rather than a solid steak of fish, El Agricultor ops for small chunks. This style gives the taco an appearance of being bite sized and is all easier to eat for it. When topped with their salsa verde, the fish tacos are at once savory, spicy, and entirely delicious.

The bustle and efficiency of the small taco truck comes at a price, however. With all of the cars coming and going in the parking lot — in addition to the engine of the truck constantly running to power the mobile kitchen inside — the air quality under the small tent where diners gather eat their food suffers greatly. The exhaust fumes would be hard to tolerate longer than the 10 minutes it takes to eat a meal at Taqueria El Agricultor. That said, if the fumes become overwhelming, it’s easy to take a meal to go, which is advisable on an especially busy day when it can get crowded.

In the midst of the bustle of running the taco truck, the man taking orders still finds time to be gracious and polite to all of his patrons, even if he doesn’t have time to make small talk. It’s the small nod or soft smile that make the difference between ordering just another meal and actually enjoying the experience — that, and the great flavors of the food.

Taqueria El Agricultor is practically a corner store on wheels as much as it is a mobile restaurant. The truck has built into it a mini oven filled with corndogs (just in case patrons don’t want any of their delicious tacos or burritos), a large cooler with bottled soda, and a wide variety of snacks, including, surprisingly, instant ramen noodles.

Between their inexpensive and tasty tacos, the polite service, and impressive supply of snacks, the Taqueria El Agricultor taco truck has about everything one would want from a quick lunch spot. Just be sure to not inhale too much car exhaust.