Local Restaurants: The Up & Under 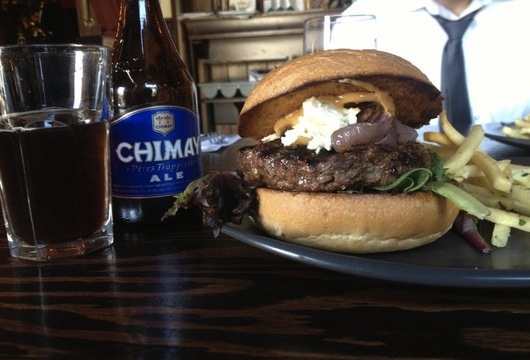 If you're looking to get a six-pound burger stacked with chicken breast, onion rings, Italian sausage, roasted tomato, a fried egg, peppers, avocado, pulled pork, a mushroom-stuffed beef patty, pepper jack, gouda, and provolone cheeses, and a side of chili cheese fries, then there is really only one place you can go: Point Richmond's Up & Under.

Since Up & Under opened its doors five years ago, owner Nathan Trivers has made the bar a community hub for not just Point Richmond, but for the entire city. "We're a dedicated rugby bar, and a lot of people come here come for the sports and to hang out," the owner explains. Trivers, who played the sport for 16 years, was looking to make the bar a place where people could enjoy the sport and get a good meal at the same time.

"We wanted to make something no one else had, and we wanted to make something that paid homage to the sport that the bar is dedicated to," Trivers says of why he decided to create the Scrum Burger. This monstrosity of a meal does indeed speak to the bar's heritage as a rugby joint. A Scrum, in the sport, is a four-on-four match of players, and this burger is a culinary manifestation of the game.

To up the ante, and in keeping with the grueling sport that rugby is, Trivers created the Scrum Burger Challenge. The deal is, if you can eat every bite of the meal within 45 minutes, then the meal is on the house -- and you get a free t-shirt. If not, well, then you're out $45 and have to live with the shame of failure. On the day I went to Up & Under, my companion decided to take on the challenge, and what became a casual meal at a local pub turned into a fight for victory. 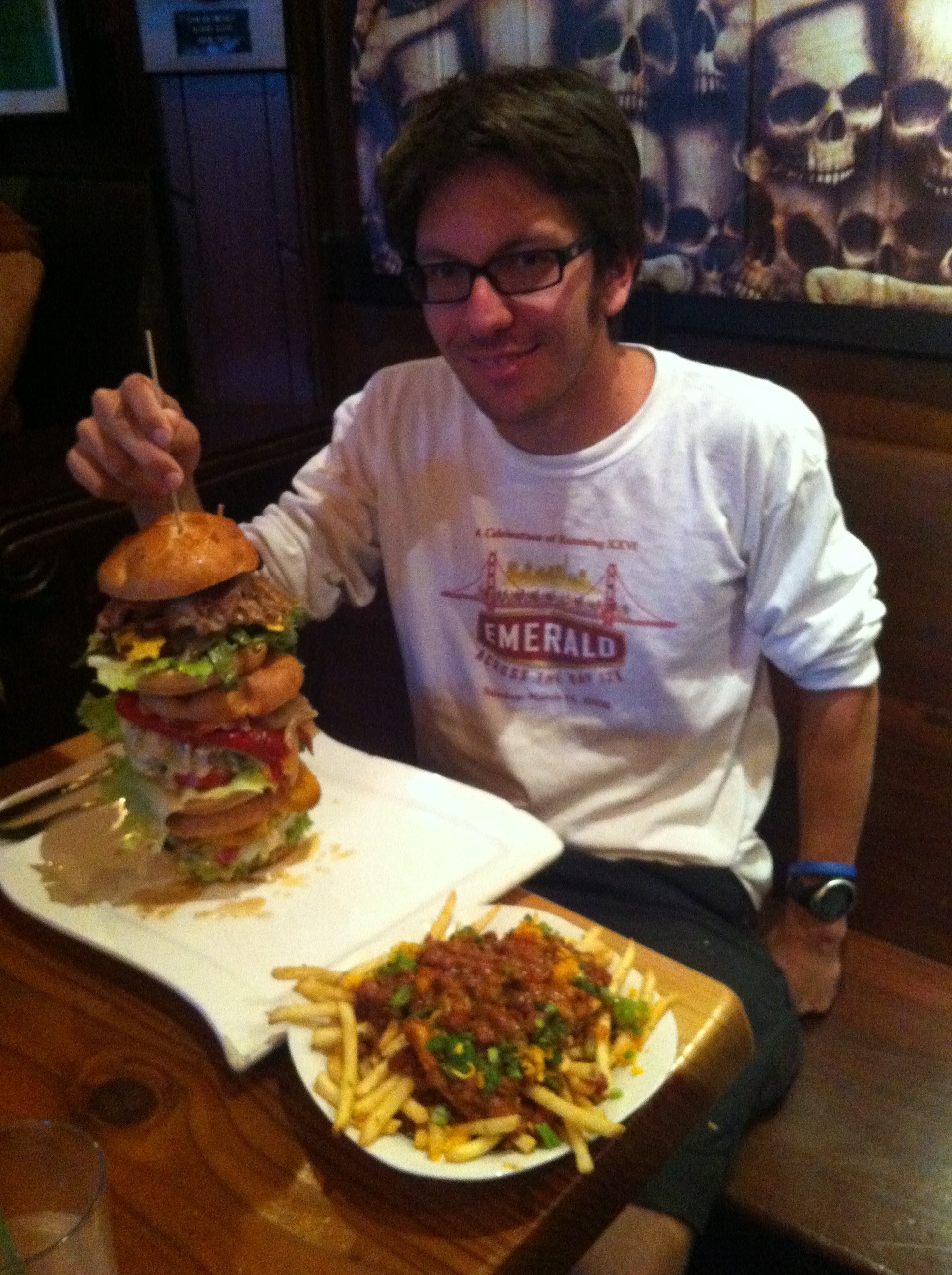 A silence fell over the restaurant when my friend uttered the words, "I'm taking the Scrum Challenge." What started out as more of a joke than anything else became a determined mission as a crowd of regulars came around our table and began sharing their stories of Scrum burger victories and failures past. Hardly anyone finishes it, one said. It's a monster, chimed in another. The general consensus was that, while everyone wanted my friend to finish it, it probably wasn't going to happen.

Half an hour later, the tower of meat came out of the kitchen. At nearly a foot and a half tall, the task at hand immediately became very real to my friend. He swallowed hard and dove in.

His first step was to unskewer the burger and grab the top half, which was essentially a double layer burger with a whole chicken breast on top with the mushroom-filled burger patty on the bottom and some onion rings and jalapeños thrown in the mix. He started making his way through, mouthful after arduous mouthful of meat, cheese, and whatever else the sadistic chef who created this beast decided to throw in. Eating through this first half was slow and steady, but it showed promise.

It took about 20 minutes to fully complete this chunk and move on to the second half. By this point, the remaining parts had devolved into an abstract mix of browns, yellows and greens that was hard to call a "burger." Nonetheless, my friend progressed. Between deep sighs, wiping sweat from his brow and desperately taking gulps of water, it was becoming clear that his valiant effort would not be enough.

"I gotta tap out," he wheezed after finishing a chunk of Italian sausage. "It's not gonna happen." With a plate of pulled pork, onion rings and the entire side of chili cheese fries untouched, it was over. Finishing the Scrum burger challenged proved to be a trip that was all about the journey, and my friend learned much about his physical limits and about perseverance along the way. If you are ever in the middle of an existential crisis, or you want to trigger one, the Scrum Burger Challenge may be the task for you.

View their website here, and their Yelp page here.