Mayor Votes ‘No’ as Council Throws off Budget’s Careful Balance 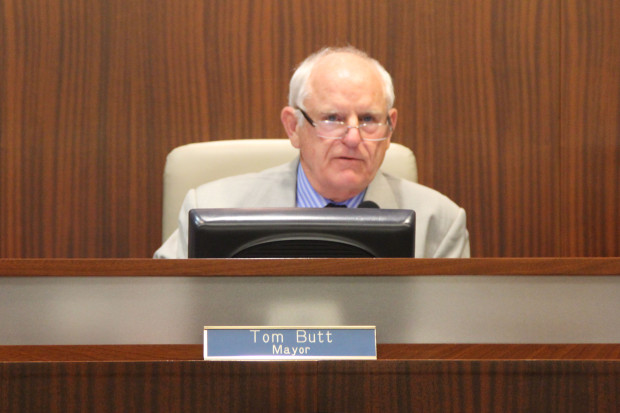 Though Richmond’s budget was approved by the city’s June 30 deadline, last night’s vote marks the first time that Mayor Butt has voted “no” on a budget in his twenty-year tenure on City Council.

By the time it was brought to the Richmond City Council on June 16, the budget had been through a substantial amount of pruning.  At Tuesday night’s special meeting, however, efforts to mitigate the city’s structural deficit were met with pleas to save personnel and programs.   As councilmembers worked to restore and prioritize previously cut items, Butt grew visibly and audibly frustrated.

A voting block made up by Councilmembers Gayle McLaughlin, Jovanka Beckles, Eduardo Martinez, and Jael Myrick led the charge for both amendment and approval of the city budget.  The primary causes for amendment were subsidies for festivals and funding for roadwork – the latter, in light of recent news that Measure U funds will fill Richmond’s budget shortfall rather than its potholes, as originally advertised.

City Manager Bill Lindsay explained why Saffron Strand’s subsidy had originally been cut: “What we look at [when determining funding] for a special event is attendance, especially by Richmond residents,” as well as the event’s ability to garner other sources of sponsorship, whether the event is a fundraiser, and whether there is an admission charge. “If so, a small increase in admission charge can account for [the loss of subsidy from the City],” Lindsay added.

Lindsay continued that Saffron Strand had charged a $150 attendance fee for the conference’s two days, and increasing the fee to $175 could likely make up for the loss of City funds.  Further, he added that many attendees were the employees of non-profits and governmental organizations, which budget their own funds to allow for employees to attend conferences.  By subsidizing these attendance fees, said Lindsay, Richmond would “be effectively subsidizing” those groups, likely including other cities and counties.

Councilmember Myrick countered that he had spoken with the organizers of Saffron Strand, and “they do struggle to put [the conference] together.”

Councilmember Beckles said that she understood Lindsay’s argument and felt uncomfortable with adding the Saffron Strand subsidy back in.  “It’s not folks on the street who we’d be asking for the extra funding,” said Beckles.  Despite this discomfort, Beckles joined Myrick, McLaughlin, and Martinez in voting to approve the amendment.

The next amendment, also introduced by McLaughlin, was to prioritize the use of all available one-time funds for roadwork, in an effort to restore Measure U’s promise to Richmond voters.  In particular, McLaughlin moved to prioritize hiring workers to fill Richmond’s road crew.

Pimplé expressed concern about suggesting that all available funds be diverted to a single effort.  “We don’t even have a plan to address the key issue,” said Pimplé, “which is, to what degree are we financially solvent in the medium-to-long term?”

The amendment to prioritize roadwork passed 4-2, with Butt and Pimplé voting no.  Pimplé expressed strong concern over the Council’s timeline to review and approve the city budget, which had been constrained to only two weeks.  “We’re not sure if these things need to be done, and yet we’re going to direct staff to do them,” said Pimplé. “We don’t have time for adequate response from staff to make sure that our suggestions are optimal.”

Yet, the impending deadline for budget approval and the momentum of the Council’s majority continued to move forward.  Mayor Butt expressed frustration that the resulting budget was “frivolous, and I can’t support it.”

Pimplé asked what would happen if the budget did not get the four votes necessary to approve it.  Mayor Butt responded, “It will.”

City Attorney Bruce Reed Goodmiller responded that “the sun will come up in the morning,” but continued that city ordinance states the Council “shall” approve a budget by June 30. “I would expect that the Council will do what it ‘shall’ do.”

Councilmember Eduardo Martinez noted that the rush to approve the budget constituted a “difficult situation,” saying, “I have not had the time to go through the budget as I need to,” but that he believed it “moves the city in a direction in which I believe it needs to move.”

The budget passed 4-2, with Butt and Pimplé in dissent.  Councilmember Nat Bates was absent from Tuesday’s special meeting due to previously scheduled travel.