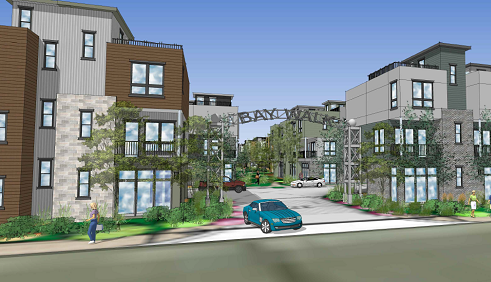 An expansive, state-of-the-art housing development is poised to bring nearly 200 more units of housing to Richmond. City Council approved the new development Tuesday, but only after a lengthy and divisive discussion about the health risks of developing in such an industrial neighborhood in close proximity to a freeway and a rail yard.

The approved 193-unit development, Bay Walk, is slated to go up at 830 Marina Way South, on an industrial site that has been unused for 10 years.

The development firm behind the project, Development Solutions, collaborated with the City’s Planning Department to ensure fulfillment of the city’s 2012 General Plan goals, in addition to partnering with several local community groups and small businesses. The goal is to make Bay Walk a neighborhood hub.

“There were about a dozen community groups that we’ve talked with and worked with over the past year and a half, and one of the key things they said after bring us a grocery store…the second thing they said was bring us a coffee shop, bring us some small businesses in addition to homes that can make this a more vibrant place,” said Brian Coggins of Development Solutions.

A new Catahoula Coffee shop, public art from NIAD, public gardens, and space for residents to open their own small businesses are all part of the plan to make Bay Walk a community hub.

As exciting as the potential use for this space was to some councilmembers, they also had concerns about the health risks to future residents of living in such an industrial corridor. The plot of land is stuck between the traffic of Interstate 580 to its north and railroad tracks to the south, and diesel engines from semi trucks regularly run through the surrounding roads, all of which pollute the immediate environment.

“How do you explain going forward with a project so close [to this type of pollution]?” asked Councilmember Gayle McLaughlin of the development firm.

An air quality manager on the project, Jeff Horneck, explained that they followed guidelines by the Air Quality Review Board and conducted a survey of the impact of the air quality, though no official Environmental Impact Review had been conducted. Development Solutions plans to take precautions to ensure a healthy environment for the buildings residents.

“In order to mitigate the risk posed by air quality, we will be using air filters that are proven to be 90 percent effective in reducing pollutants for residents of the building,” Horneck said.

The air quality manager conceded that the effectiveness of these filters is contingent upon the units doors and windows staying closed most of the time, but that they are the best solution available.

This explanation didn’t convince some councilmembers, but Mayor Tom Butt praised the project for its collaborative approach.

“I think this is a model project for collaboration between the community, the Planning Department, and the City,” Mayor Butt said. “With the air quality issue…I think at the end of the day there’s still a lot of ambiguity here.”

After discussion on the issue, Councilmember Vinay Pimplé made a motion to approve the item, which passed with approval from Councilmembers Myrick, Bates, Pimplé, and Mayor Butt. Councilmembers Eduardo Martinez, Jovanka Beckles, and McLaughlin abstained from voting.