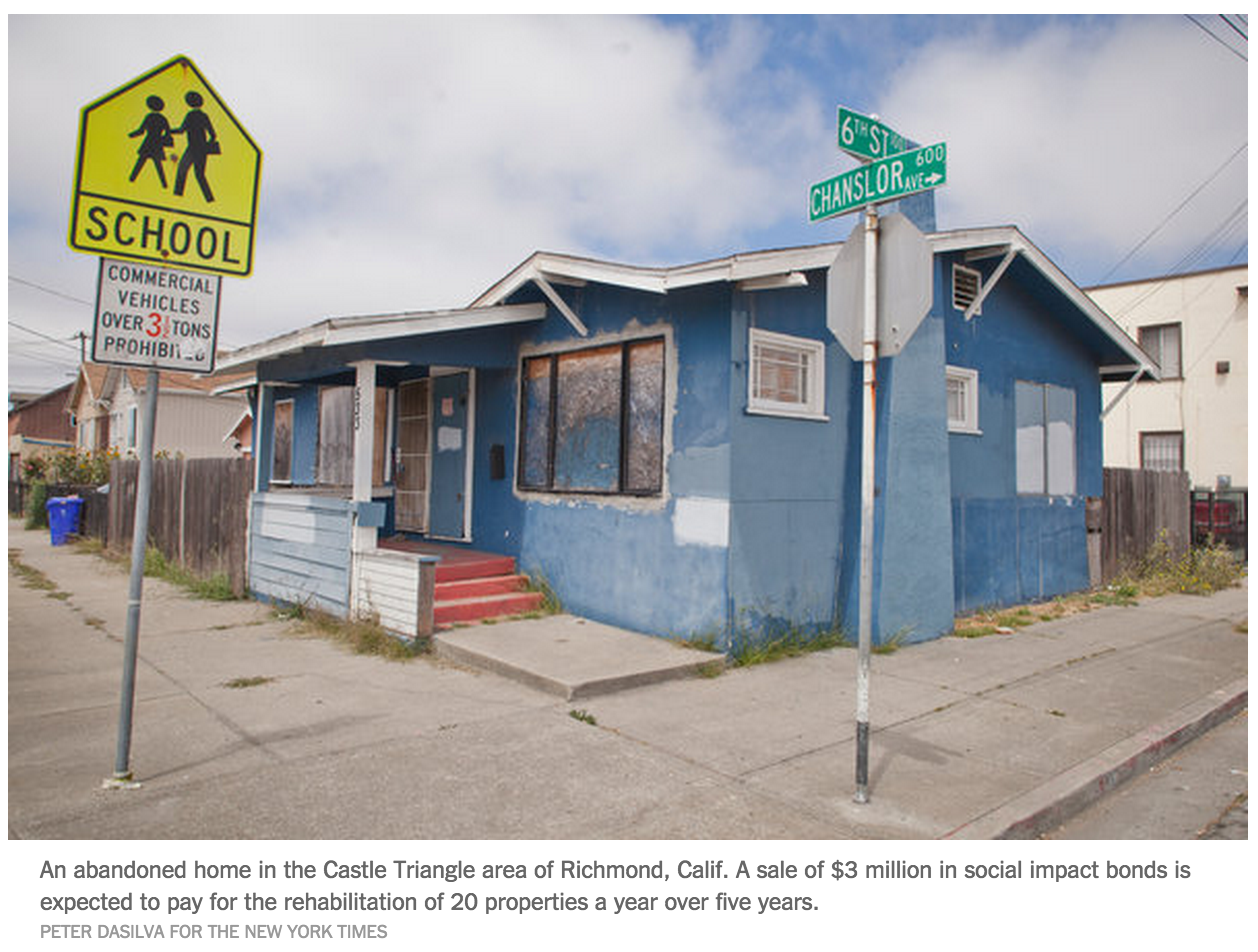 EVERY two years, the residents of Richmond, Calif., a city long known for some of the highest rates of violence in the United States, gather to discuss its priorities. For years, the No. 1 concern was crime.

But things have started to look up in Richmond, a city of about 100,000 people in the midst of Bay Area opulence. At the most recent meeting, Richmond residents were more concerned about blight. An obvious — and seemingly fixable — example was the city’s 800 or so abandoned homes, which cost it thousands of dollars a year to maintain in their dilapidated state.

Typically, social impact bonds are contracts, not bonds as investors think of them. If the group receiving the proceeds can improve a certain social condition, the investors are paid back with some interest; if it fails, the investors lose. The bonds have been used to reduce recidivism rates for criminals released from prison and to reduce teenage pregnancy rates.

Jim Becker, president and chief executive of the Richmond Community Foundation, said he had found a way for the city to sell social impact bonds to raise money that the community foundation could use to buy the homes. Local workers would rehabilitate the homes, which would then be sold to people through first-time home buyer programs.

A sale of $3 million in bonds is expected this month, pending final approval by the Richmond City Council. That would pay for the rehabilitation of 20 properties a year over five years. And Mr. Becker believes there is investor interest for another $3 million.

“The challenge right now is these properties don’t turn enough of a profit for a typical real estate investor,” Mr. Becker said. “An investor wants a 30 percent to 40 percent return.” Under Mr. Becker’s plan, investors receive a 2 percent return on the money they put in, and if the project is profitable, up to half of their original investments.

While the bond issue is small, it is an example of increased investor interest in social impact projects, a niche that has long appealed to two types of investors: those who want to avoid companies that clash with their beliefs, and those with a desire to put a small portion of their wealth into an investment that could do some good, whatever the return. What has held social impact investing back is the perception that its returns are lower than those of investments without that social overlay.

One type of social impact investment is green bonds, which focus on projects like wind power, clean water and sustainable agriculture. There is also a range of investing strategies known as environmental, social and governance investing, or E.S.G. Some strategies screen out companies that make certain kinds of products, like alcohol or tobacco; newer strategies look for positive screens, such as seeking companies that work in certain areas or employ best practices in their businesses.

A spate of recent studies and a conference this week worked hard to show that the returns on investments with environmental, social and governance screens were similar to other investments — in both good and bad ways — and in some cases, were better when compared with indexes since the financial crash.

Certain areas are growing rapidly, like green bonds. Since 2007, about $60 billion worth of green bonds have been sold, according to Marilyn Ceci, a managing director and the head of green bonds at JPMorgan Chase. But $37 billion of that came in 2014. One prediction at a U.S. Trust conference on Wednesday put that amount at more than $100 billion this year.

Why do people invest in an area that does good but can be complicated to understand and has a reputation of modest returns? The reasons are varied.

Banks make these investments because they help fulfill the requirements of the Community Reinvestment Act of 1977, which requires them to meet a range of credit needs, “with the added bonus of qualifying for great P.R.,” said Robert T. Esposito, a lawyer at Orrick, Herrington & Sutcliffe. “If you’re a foundation, you can meet your 5 percent distribution” of assets as required by law, he said. “Or if you’re an impact investor, you must be willing to trade off some returns.”

But Andy M. Sieg, head of global wealth and retirement solutions for Bank of America Merrill Lynch, views this as a chance for retail investors to drive the creation of a new investment category. “We’re in the early stages of an innovation cycle,” he said. “Client demand emerges. Advisers become stimulated by this demand. It drives product creation. It’s happened again and again, and it’s taking place in the era of impact investing.”

He said Merrill Lynch now has $9 billion in social impact investments, compared with $6.4 billion last year. (Over all, the firm has more than $2 trillion in assets.)

Of course, the newest thing doesn’t always catch on with everyone.

In one study, 71 percent of investors were interested in making investments with an environmental, social and governance screen, and 72 percent thought companies benefited from carrying out those principles. But 54 percent believed they had to give up performance if they made such investments, said Audrey Choi, chief executive of the Morgan Stanley Institute for Sustainable Investing.

Yet in a study not yet released of 10,000 equity mutual funds in the United States over the last seven years, Ms. Choi said, the returns of sustainable funds met or exceeded the median returns of traditional funds 64 percent of the time and had the same or lower volatility.

In essence, sustainable funds could perform just as well or better than traditional funds and also just as badly.

“Manager selection absolutely matters,” Ms. Choi said. “I often say just because you add the word sustainable into an investment, the laws of physics aren’t suspended. If we want this market to really grow, we have to make sure we go into this in a ‘best in class’ way.”

Cary Krosinsky, an adjunct professor at the Earth Institute at Columbia, found in research on the returns of 850 funds that social impact investments made with positive screens outperformed by more than four percentage points those made with screens that excluded sectors.

While he also argued for the need for expertise in making environmental, social and governance investments, he said a bigger advantage to investors might be to make E.S.G. another factor in their analysis of an investment. “If you don’t, you’re not doing anything wrong,” he said. “But if you do bring it in, you know you’re not missing out.”

Green bonds, for example, seem to be growing rapidly because they carry the risk of the issuer, say, a utility, and not that of the project they are financing, like a windmill. “The essence of green bond debt is the project,” Ms. Ceci said. “The purpose is to transition to a low-carbon economy. But the risk is the credit decision of the issuer — you’re not exposed to the project directly.”

Last year, when Massachusetts sold $350 million worth of green bonds, $260 million of that was bought by retail investors. “It wasn’t just investors from Natick, Newton and Wellesley,” Ms. Choi said. “They had investors from California and around the country buying it.”

Yet for those tempted to invest, these are still early days, with plenty of pitfalls. If the Richmond project fails, the investors get back whatever money the program still has and the titles to their properties. That is not exactly a double-digit return for tying up an investment for so long.


Reposted from the New York Times