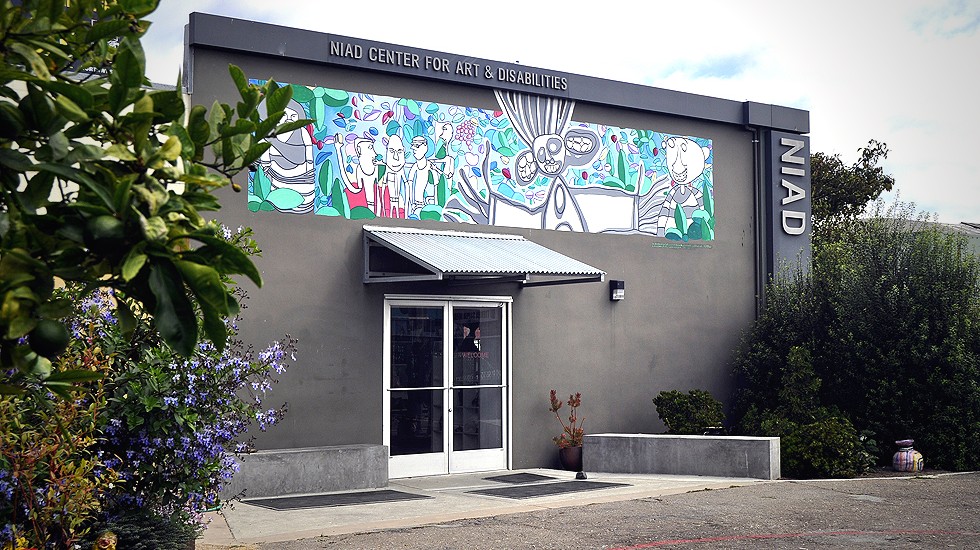 "We lure them in with the food trucks, but they stay for the art," says Tim Buckwalter, art director at NIAD, of the gallery and workspace's show openings.

Nurturing Independence through Artistic Development, shortened to NIAD, regularly draws a crowd anywhere between 100- to 400-strong for show openings. Buckwalter believes people turn out in such numbers because of the particular space NIAD holds in the cultural landscape of Richmond -- and, well, no one can resist a good food truck.

Elias and Florence Katz formed NIAD in the early 1980s, as retaliation against Reagan-era budget cuts with the mission to provide an opportunity for creative expression. "In the artists' work, you see the world they are living in, their version of reality that they may not be otherwise able to communicate," Buckwalter elaborates. NIAD is unique in the way it offers artists supplies and gallery space. Some artists come in every day, others on occasion, but upon entering the studio, all are given free reign of the available supplies without direction or critique from NIAD staff. The work the artists create here is a pure representation of their imaginations.

As a gallery where artists display and sell their work, NIAD is a standalone in Richmond. Though nearly every artist has sold at least one piece, Buckwalter describes the challenge of initially engaging the public with NIAD as an uphill battle. However, Buckwalter finds that once people see NIAD for the first time, they usually return again, and they typically bring along a friend or two. From this jumping-off point, the gallery quickly becomes a hotspot to purchase unique art pieces.

NIAD works to keep the public engaged by offering an expansive schedule. With four unique gallery spaces, each one receiving a new show every two months, the work displayed at NIAD is ever-changing. NIAD's rapidly changing show schedule is designed in part to keep the public engaged with new content, but the massive body of work produced by the artists also mandates it. With over 60 regular artists who work in media ranging from painting and ceramics to fiber and jewelry, NIAD has to dedicate a third of its space solely to storage of work. To keep up with this, in 2015, the arts center will have a new show opening in each gallery once a month. In total, nearly 50 shows will pass through NIAD next year.

Most recently, on Saturday, July 12th, another group of shows opened in the galleries. The main show from Sara Malpass, titled "What Are Words For," is a mixed-media project of assembled lists. Malpass looks through books and magazines and creates massive collections of words that stand out to her. She then assembles them in a list and writes them out in large curving lettering. Sometimes, Malpass transfers words onto clay and creates a pedestal for a word; other times, she lets her calligraphy stand alone, like on one wall of the gallery that has been converted to a chalkboard, and which she covered in words. In many ways, the work of Malpass is the essence of NIAD's mission. "The goal of NIAD is to continue creative expression and unique communication. The hope is that if we give the artists the tools and the materials, they will be able to bring us into their world."

NIAD is open to the public Monday through Friday, 9 am to 4 pm. Click here to learn more.