Instruction, Not Construction: NO ON MEASURE R 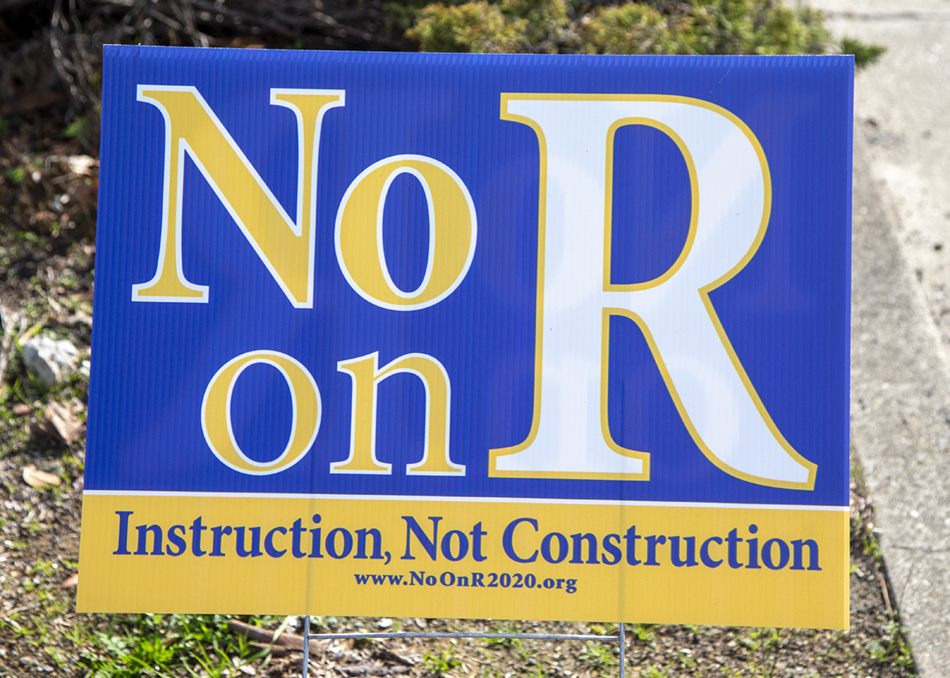 In November 2019, the West Contra County Unified School District Board (WCCUSD) voted to place a $575 million bond measure on the March 2020 ballot. This would bring the District’s total bond program to over $2 billion.  The public, however, has had enough with the District’s waste and broken promises.  We urge voters to reject Measure R for several reasons:

Since the November vote to put the measure on the ballot, the WCCUSD has disclosed a massive $48 million deficit. Over 250 teachers are now at risk of losing their jobs while student services will be slashed all over the District.  This threatens to widen the student achievement gap and reduce student academic achievement.

The budget crisis should be the District’s first priority, but instead, the District has endorsed this effort to build new classrooms.  This leaves people in the community rightly asking, “What’s the priority:  teaching and student achievement or building new classrooms?”

Been to the Well Too Many Times

The District is not telling voters that this bond would be the seventh WCCUSD bond if it is approved by voters.  Residents are already on the hook for more than $2 billion from the past six bonds including principal and interest and will be repaying through the year 2054.  The District also is not telling voters that two bonds ago, it promised to finish the construction program if that bond were approved.  The community did its part, dug deep, and approved it at the ballot box.  The District, however, failed to keep its word.  Instead, the District chose to lavish over $360 million rebuilding two high schools while it knew other schools would remain in desperate need of repair or reconstruction.

Furthermore, the District acted irresponsibly by refusing to build within its budget.   If WCCUSD matched the state average for per square foot of school construction cost, the District would have already have had more than enough money to rebuild every school.  Instead, WCCUSD tells us that it still needs another $1.1 billion to finish the program, never mind that this District’s per square foot construction costs are 2-3 times the state average, according to Contra Costa County Grand Jury Report 1514.

We all know that it is tough to make ends meet in the Bay Area. Your property tax rates skyrocketed from all these past WCCUSD bonds. The average household now pays about $1,000 per year for the six bonds on the books.  If Measure R passes, expect it to add another $250 per year to a household’s property tax bill, on average.

Asking for a Blank Check and Removing Safeguards

The District lists priority schools for reconstruction, but then in the bond language gives itself some wiggle room by saying that it may use Measure R proceeds at any District school.  The District also fails in legally binding language to offer any type of construction schedule, so voters are left guessing as to what will really happen to which school and when.  With all the broken promises from past bonds, that’s not acceptable.

If you read the Measure R arguments, supporters make it sound like there will be strict and independent oversight of how the bond funds will be used.  But District staff - twice in board meetings since November 2019 - have proposed taking steps to dramatically reduce role the ability of the Citizen’s Bond Oversight Committee to play its state-mandated oversight role.    This has the effect of reducing transparency and accountability in the building program, undermining the public’s right to know how its monies are being spent.  Unfortunately, the matter will not be resolved until after the March 3 election.

Measure R is fatally flawed.  Voters must reject Measure R and then tell the WCCUSD to commit to specific and legally binding bond language that tells voters exactly what it will do when it will be done, how much it will cost, and that adequate protections will be in place.   Voters have every right to be suspicious.

Vote No on Measure R.

Residents living in the WCCUSD area are already paying for six bonds with an outstanding balance exceeding $2 billion, including principle and interest on the $1.6 billion bond program.  Some community members have leveled allegations that there has been tremendous waste in the school construction program.  Even after spending $1.6 billion, the district claims that it will need at least another $1.1 billion to finish the school construction program.  Two bonds ago, the district claimed that if voters passed that bond, it would have sufficient enough funds to finish all needed construction.  Yet, here we are on a seventh proposed bond seemingly further away from completion than we were years ago.

Ben Steinberg is a West County resident and Chair of the "No on R" campaign.