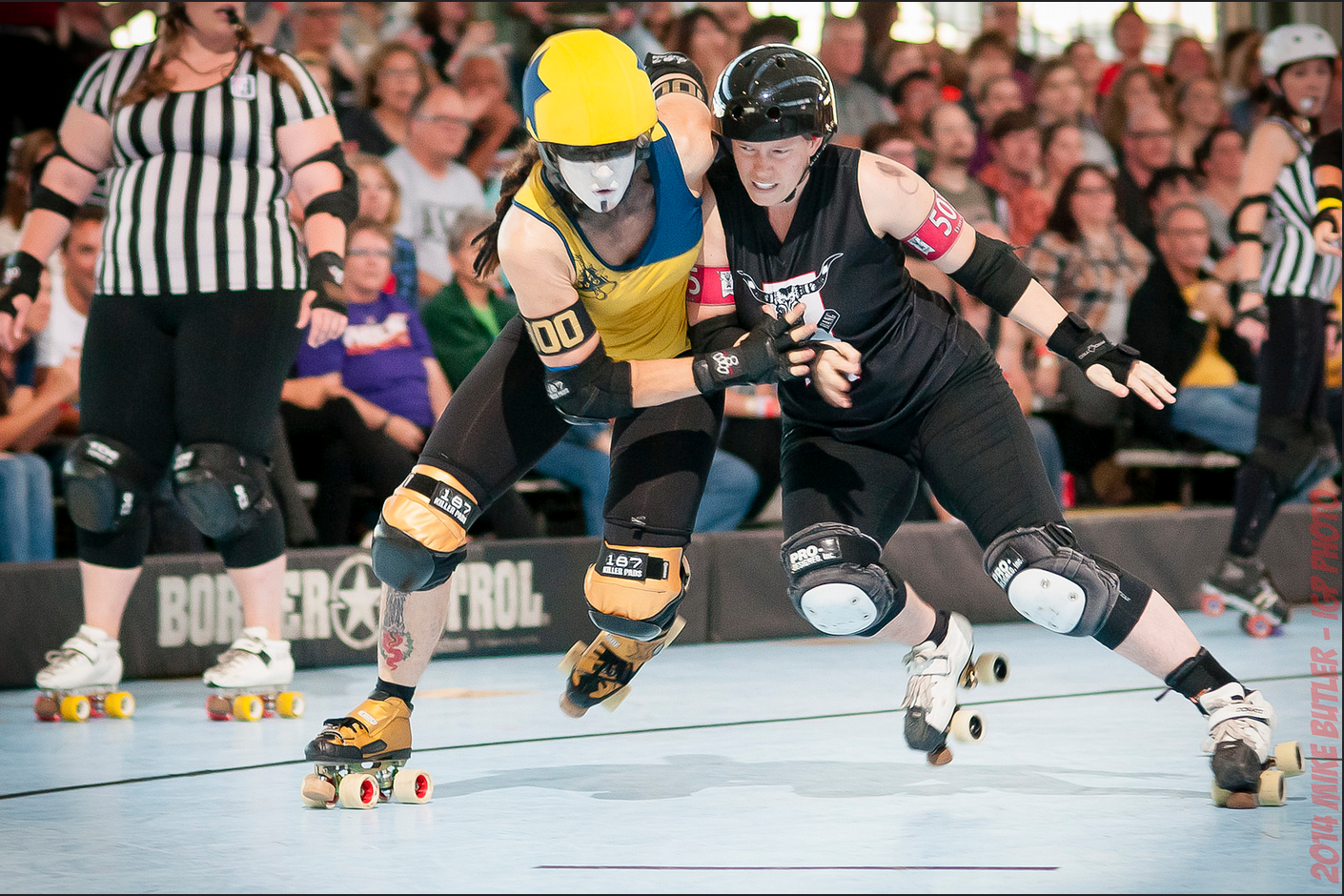 The Oakland Outlaws and the Richmond Wrecking Belles fought a ruthless neck and neck game at the season opener of the Bay Area Derby Girls (BAD) Saturday night. The two East Bay rivals proved to be just as well matched as when they faced each other at the championship last season. This time, however, it was the Oakland Outlaws who claimed the title of victor — albeit by the narrow margin of four points.

Before we go too far into the details of the match, here is a brief explainer of roller derby for those who are new to the game:

Rivalry: That between the Richmond Wrecking Belles and the Oakland Outlaws is a big one. Both teams are regarded as the two best in the league, and the Belles won by merely three points at the championship match last season. Each had something to prove going into this game.

“I think this game might be rough,” said Belles team captain Skatelyn before Saturday’s match. The Richmond team lost four of their best players at the end of last season. Though they gained three more, many of the team’s supporting players from last season now have to step up and take leadership roles. The shift in dynamic is still being worked out. “The Belles are having a hard time this year,” cautioned Skatelyn.

The game began in a blur as the Oakland Outlaws scored 15 points right out the gate. It was clear they weren’t messing around with the season opener. And then they just kept racking up points. Twelve minutes into the game the score stood at 4;35 Outlaws.

Even though the Outlaws were scoring big, the game was slow going. The Wrecking Belles are a powerhouse team with bulking defense and swift offense. In roller derby, a game of stamina, strength, and ruthless force, the Belles have everything they need to win.

The Belles’ Demanda Riot, who wore her face painted stark white with a single black stripe blurred over her eyes, proved to be one of the team’s toughest blockers. Demanda would pick a target, hook her skates around in front of her victim, and then force her entire body back into the player. Demanda was crucial in keeping the Outlaws’ points down, but the Oakland team had the Belles beat when it came to strategy.

The score was 35;67 Outlaws with five minutes left in the first half. The Belles’ jammer kept shoving to break through the Outlaw blockers, but the Oakland team deployed a myriad of tactics to keep her back. One of the most commonly deployed tactics was simple but effective: two Outlaw players would link arms and form a moving barricade to shove and wear down the Richmond jammer. By this time the Outlaw jammer would have broken through the Belles’ defense and circled around to rack up more points.

This isn’t to say the Belles weren’t scoring any points. Eva Menace, the Belles’ star jammer of the night, would occasionally tear through the Outlaws and bring back the Richmond team’s points in spurts. At the end of the first half the score stood at 59;72 Outlaws.

Eva Menace again ripped through the Outlaws at the whistle of the second half. She helped rack up nine points in the first jam bringing the score to 68;76 Outlaws and narrowing the gap between the two teams.

The second half of the bout was a game of catch up for the Belles. The Richmond team would score half dozen points, and then Oakland would score a dozen. It was a frustrating game to watch, knowing that the dynamic could shift in a single jam — if only the Richmond jammer could break through the blockers.

With one minute left on the clock, the score was 125;128 Outlaws. The three point difference could be closed in a matter of seconds. It was anyone’s game. The energy filling the Craneway Pavilion was palpable — audience members roared with support of their team, knowing that the victor would emerge in a matter of seconds.

Between the clashing of jammers and blockers and the yelling of the audience, it was impossible to tell what was happening in the final seconds of the game. When the whistle was blown, however, and the final score was presented, the Oakland Outlaws won with 131 points to the Richmond Wrecking Belles’ 127.

Though the Richmond team didn’t win this bout, there are still three more games of the season. To learn more about the Richmond Wrecking Belles and the other teams of the Bay Area Derby Girls, click here.