While this is their FINAL count, the results have not yet been certified.  The County has 30 days from the date of the election to certify the results. 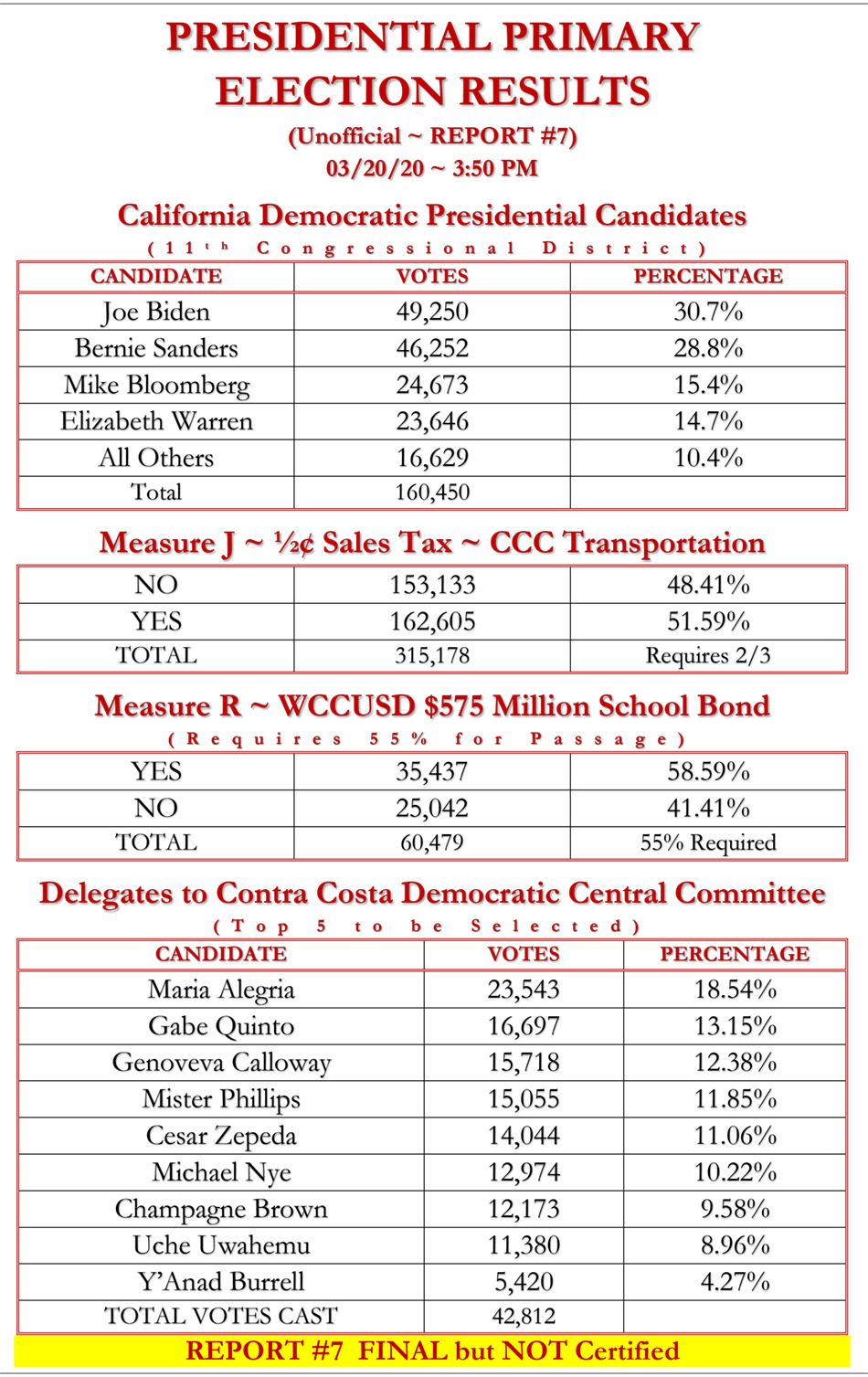 Interest in a Primary Election is always low but there are often down-ballot issues and races that are of interest to certain communities.

Here in West County, Measure R is a controversial school bond measure intended to provide $575 million in funding to continues the repair/replacement of the District’s 53 crumbling schools.

Bond measures require a 55% majority for passage and Measure R appears to be successful with 58.59% of the ballots cast in support of the bond.  With 60,479 ballots cast for Measure R, this is a 2,174 vote margin of victory.

Measure J is a half cent sales tax measure intended to help fund transportation projects in Contra Costa County.  This measure required a 2/3 majority for passage but failed when it only met a 51.59% advantage of the NO votes.

Although it may not matter at this point, the race for Democratic delegates to the National Convention was, at the time, of great interest with Joe Biden and Bernie Sanders being the top two candidates still in contention on election day.  Delegates are distributed depending on how well they performed in each Congressional District.  Most of Contra Costa County (including the Richmond/El Cerrito/San Pablo metropolitan area) is a part of Congressman Mark DeSaulnier’s 11th Congressional District.  The final results showed Joe Biden with a 30.7% to 28.8% margin of victory.

Much is made on election night about the results.  The next morning’s morning newspapers (which usually go to press around 9 PM the night before), print page after page of results.

With close to 70% of the ballots cast in West County cast as mail-in ballots, many of those ballots don’t even arrive at the Elections Division offices until Thursday or Friday.

With multiple races in the Primary Election, it’s difficult to determine how many ballots were actually cast but if the vote county for Measure R can be used as a metric (voters from Hercules to the Albany border were allowed to vote on this measure), the difference between the first count and the last was 47.6%.  Nearly half of the ballots counted were counted long AFTER the first vote count.

And now we prepare for the vote count after the November election.