Have you heard the news? Traffic in the 9 county Bay Area is getting out of control.  On some days, getting to work, going shopping, or any other trip from Point A to Point B can be the source of great exasperation, frustration and a lot of wasted time.

To alleviate some of these problems, the Metropolitan Transportation Commission partnered with the State Legislature to place on the ballot Regional Measure 3.  With the exception of the Golden Gate Bridge, this measure will gradually increase the tolls paid on all seven bridges in the 9 county Bay Area.

From the RM3 web site:

“If approved by a majority of voters in Alameda, Contra Costa, Marin, Napa, San Francisco, San Mateo, Santa Clara, Solano and Sonoma counties, toll revenues would be used to finance a $4.45 billion slate of highway and transit improvements in the toll bridge corridors and their approach routes.

The campaign to promote the ballot measure was financed by numerous tech businesses located in Silicon Valley.  There was no organized effort to defeat the measure.

Concerns were expressed, most prominently by Congressman Mark DeSaulnier, about where the funds would go and whether the benefits would disproportionately benefit the people in Santa Clara, San Francisco and San Mateo Counties even though the cost of Regional Measure 3 would be borne more by commuters farther north.

Even commuters living in Marin County, if they need to use a bridge, would use the Golden Gate Bridge—which is exempt from Measure 3.

Support of Regional Measure 3 was disproportionate in those areas where the cost would not affect them while the benefits would.

Those commuting from Solano, Sonoma and Napa Counties are less likely see any advantages from extended BART trains (when they can't get to the BART stations), ferry service, Caltrains and MUNI busses.

There are still a lot of ballots yet to be counted but the yes votes outnumber the no votes by a margin of 54% to 46%—seemingly unbeatable. 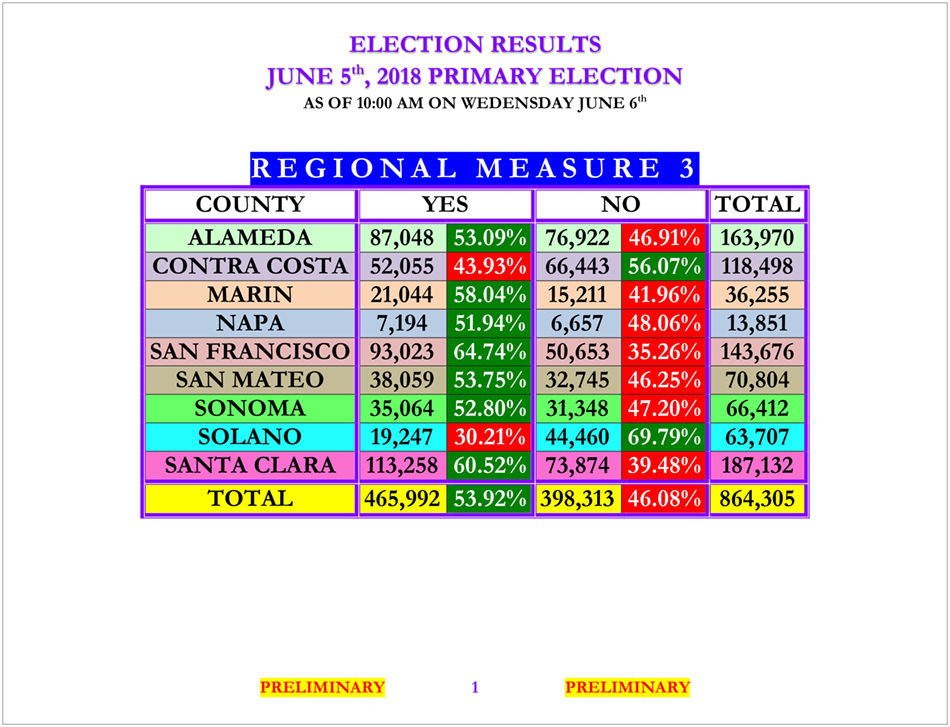