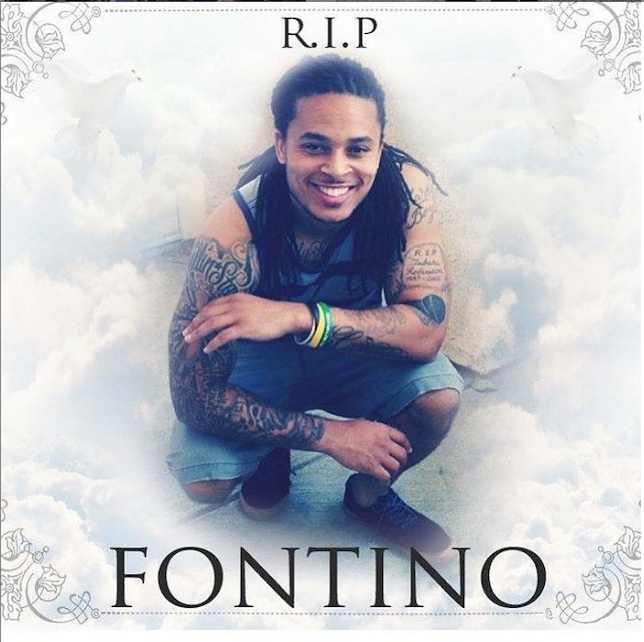 Before Fontino Hardy, Junior, 29, was shot July 14 in the Monterey Pine Apartment parking lot, he spent the afternoon speaking to youth at a local community center about the risk factors of violence and how to avoid them. Tino, as he was more commonly known, was a community figure; a success story in a city with rough neighborhoods.

His death has shaken the community. Beyond being an all too familiar scene in the city — the murder of a young black man at the hands of street violence — Tino was seen as someone who got out.

Tino grew up in Monterey Pine Apartments, which was called Kennedy Manor back then, a building which has long been a locale of suspected gang activity.

Here we remember Tino through the words of his friends and family.

“I knew Fontino when he was in his mom’s stomach,” starts Khalid Elahi, a parent figure and family friend of Tino. Elahi grew up with Tino’s parents, and he took it upon himself to help raise young Tino.

“He had a smile that could light up a coliseum,” Elahi says with a dry laugh. The pain Elahi feels is made all the more bitter by the fact that he worked so hard to get Tino out of the bad situations which cause this sort of violence.

It was Elahi who first introduced Tino to Alive and Free (formerly called the Omega Boys Club), an organization dedicated to teaching young women and men how to avoid violence and live prosperous lives. Tino’s involvement in this organization was formative to his life.

“We wanted to get him out of the hood,” Elahi explains frankly. “A couple years after high school he was stuck working at a check cashing business, and I brought him to Omega Boys Club. It was tough for him, but week in, week out, he fell in love with the place.”

“In class, Fontino was delightful,” says Deborah Estell, Academic Director at Alive and Free. Estell watched as Tino thrived in the organization, learning leadership skills and how to identify and avoid violent situations. He also took a college prep class at the organization.

With help from Alive and Free and support from his friends and family, Tino went to Tennessee State University on a scholarship and graduated with a degree in criminal justice. He planned to dedicate his life to helping youth in juvenile detention facilities and volunteering with Richmond youth.

After Tino came back from Tennessee in 2013 he met and started dating Rosie Clupo when the two were working at a store in Emeryville.

“Tino was just so light and funny — some people just have a light in them that draws people in, and he had that,” Clupo says.

Clupo and Tino eventually fell out of touch when she moved away, but his dedication to family and helping others stay with her.

“I think it was because he had a lot of strong women in his life,” Clupo reflects. “From his grandma, and his mom, and his little brother and sister — he took pride in his family. He liked helping people.”

That’s what Tino was doing the afternoon he was shot. Speaking at the Booker T Anderson Community Center in Richmond, Tino channeled his magnetic charisma and passion for helping others into passing on what he learned at Alive and Free to a younger generation.

Afterwards, Tino headed over to the Monterey Pine Apartments, less than a mile away. He was shot in the apartment parking lot in an incident Richmond Police officers believe was related to a recent spike in violence and gang activity in the city, even though they don’t think Tino wasn’t the intended target. Two others injured in the incident walked away with minor injuries.

“It’s not easy to keep all of the alliances locked in, because they move and shift,” Richmond Police Captain Mark Gagan says of the city’s gang scene. “But we believe a few groups that associate with the south side of Richmond have been perpetrating shootings against each other for eight months now.”

The same day as the shooting at Monterey Pine which killed Tino another shooting happened nearby at Pullman Point Apartments, just up the street. Richmond has seen 10 homicides so far in the city this year — double the number at this point in 2014.

“We have these things called the commandments of violence,” Elahi explains of his neighborhood. “‘Thou shalt carry a gun; thou shalt get thy money; thou shalt not be a snitch.’ That’s what the neighborhood tells you. Fontino was speaking out against those things before he was shot.”

Police are still investigating the incident, but to those who loved Tino, they already know that the culture of violence on streets in Richmond is to blame.

“Had the people in Kennedy Manor been trained in how to stay alive and free, this stuff wouldn’t have happened. It’s the disease of violence,” explains Estell.