At their meeting of Tuesday January 14th, the Richmond City Council voted to accept a map breaking up Richmond into six wards for the purpose of electing Councilmembers.

This was the result of a Threat Letter sent to the City by Attorney Scott Rafferty demanding such action to ensure that minorities have a better chance of getting elected to the Council.  [Had the Council rebuffed that letter, a lawsuit would have ensued that could have cost the City millions of dollars with the same end result.] 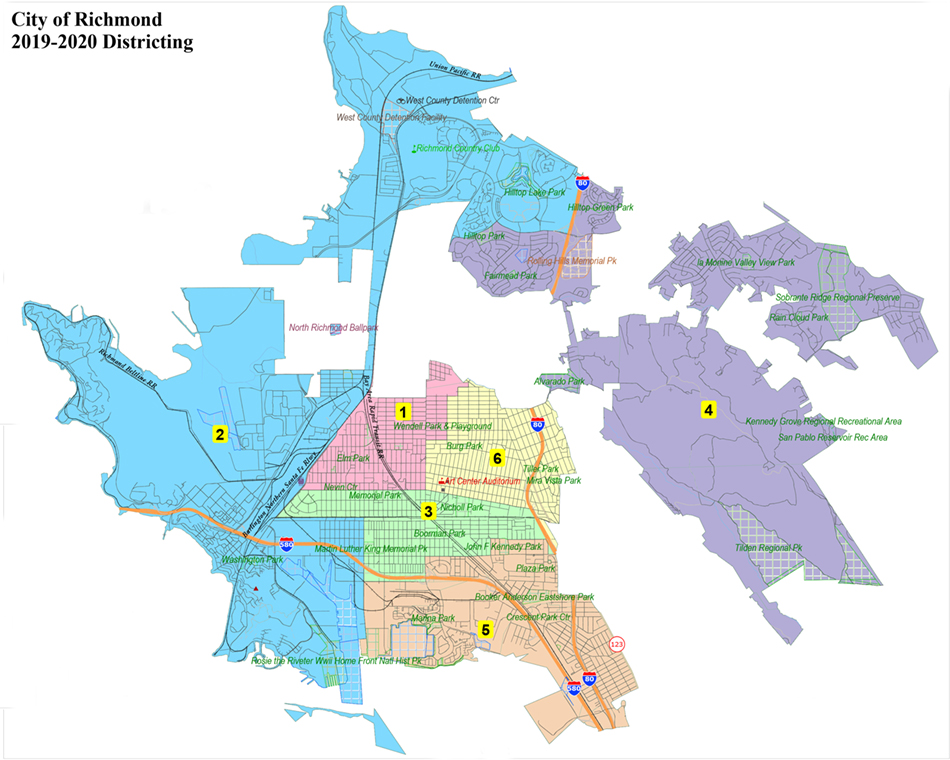 The fact that the Council is made up of six minorities right now and over the past 25 years there was 75% minority representation. None of that mattered for the purposes of this action.

There was an exhaustive process of numerous public meetings to allow input from the public on how the maps should be drawn and once drawn, there were well over two dozen maps for the Council to consider.

The Council went back and forth expressing their own views about which map was most appropriate, which ethnicity might be best covered and, even which map protected sitting members of the Council.

When all was said and done, the Council accepted the map that is attached here.

[The map found on the City’s web site is not very detailed.  It shows mostly landmarks and not street names.  The street names shown are often 3 blocks high so it’s difficult to see which line on the map it’s referring to.

To see a more detailed map, the interactive map can be found here:

When the map was selected, the Council then had to decide which of the three districts would be up for election in 2020 and which three in 2022.

Of course, they needed to consider where the six Councilmembers currently live.

There was concern about districts where multiple Councilmembers reside.

The fact that two wards (5 and 6) have two sitting Councilmembers residing within brings up issues on what the incumbents who are up for election can do.

The Council chose to host elections in Wards 1, 5 and 6.

At the end of the meeting, City Staff could not explain with any clarity how this might happen and two Councilmembers had differing ideas about how this is to handled.

Radio Free Richmond reached out to James Atencio from the Richmond City Attorney’s Office for a clarification:

After this election, residents in Ward 3 (the Southside) and Ward 4 (El Sobrante/Carriage Hills/Fairmede-Hilltop) will have no designated member of the Council to speak on their behalf.  They will have to rely on the three remaining At Large Councilmembers to stand up for their needs.  In a perfect world, every member of the Council will be representing the entire city but in cities where wards/districts have been set up, that is not often the case.

The Council will revisit the idea of ranked voting and of an independent committee for redrawing the wards once the 2020 census data is available.