Richmond Pulse: Will My Family Benefit from the New Richmond? 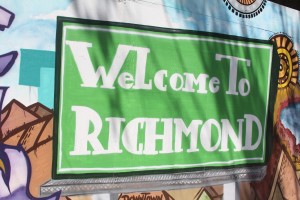 I am from Richmond. Despite attending K-12 in El Cerrito and being more familiar with its sites and people, it never felt right to claim being from there. I am from Richmond, where I can hop on a bus and run into at least two people who know my sisters or my parents. I can walk the streets and somebody will ask if I belong to my mother, who has lived on what seems like the corner of every street in Richmond.

But the question is, will my family benefit? Will my neighbors? I can see how nervous residents whose families have been here for generations look whenever they see a young, hip couple wearing American Apparel walking down the street with their dogs.

My mother’s family has been here for over seven decades. Both of her parents, like most black people here, migrated from Louisiana. I have never been down South but I imagine I would experience the same hospitality I get in many areas of this city. We still have and honor the legacy of black migrants who worked in the shipyards during World War II and stayed long after the divestment in the city. They survived the Ku Klux Klan, mourned the assassination of Martin Luther King, Jr., fought against police brutality, and made it to the other side of the war on drugs. Their children and grandchildren remain here. They have all wanted and deserved more from Richmond.

But will they benefit from the new Richmond that is arriving? Or will they be left behind, as more black and brown residents are being displaced?

I am from Richmond, where dozens of white hipsters now walk through the streets, averting eye contact with long-time residents.

Conversations around gentrification don’t often include black families who could not or did not want to move from Richmond. Many parents, like my mother, used to say, “It will get better someday.”

That someday seems to be arriving sooner than I expected, but I wonder, which of us will benefit?