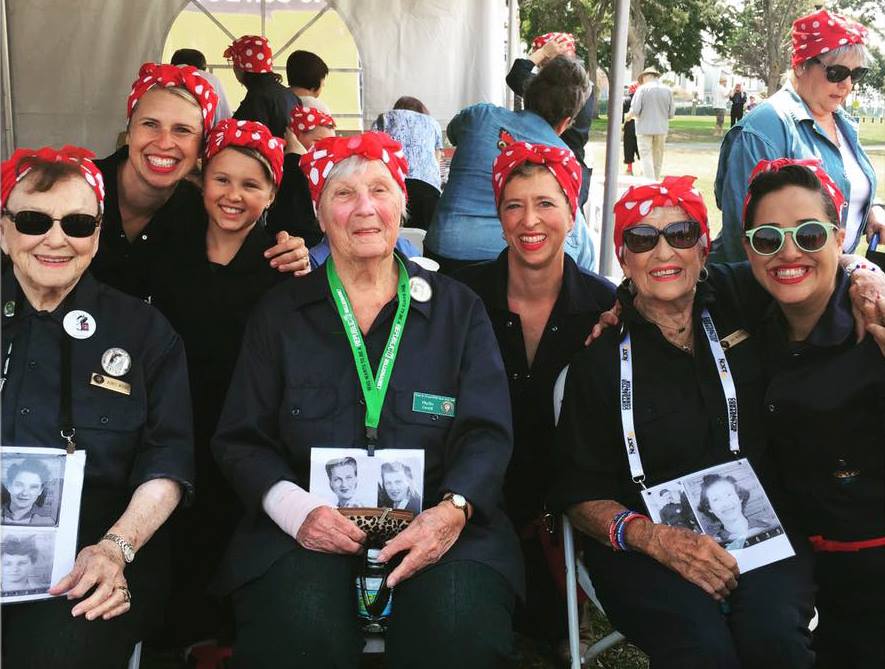 The largest and most diverse gathering of Rosie the Riveter lookalikes ever assembled broke a Guinness World Record at the Rosie the Riveter WWII Home Front National Historic Park Saturday. The day was a celebration of the lasting impact of Rosie on women in America and of Richmond’s central role in the WWII.

The event was an attempt to break the Guinness World Record set by a gathering of 776 Rosies in Ypsilanti, Michigan last year.

Rosies of every variety, from original Rosies who worked in the Richmond shipyards to toddlers dressed for the occasion made the Park a sea of blue, white, and red.

The contagious revelry of the day at one point erupted into an enormous conga line of Rosies. The dancers listened to WWII-era classics such as “Mr. Sandman”and “Boogie Woogie Bugle Boy”as sung by an Andrews Sisters tribute trio, The Swingin’Blue Stars of the USS Hornet.

Leading up to the official count, the hundreds of Rosie lookalikes reflected on the revolutionary work of the Rosies, swapped personal stories of their connection to the historical figure, and posed like Rosie in front of a “We Can Do It!” backdrop.

Many of the original Rosies in attendance worked in the Richmond Shipyards as “Wendy the Welders” to help construct the 747 warships that helped secure the Allies’victory of WWII.

The Rosie event, which took place just one day after the 70th anniversary of the Japanese surrender that marked the end of the war, was also a moment to reflect on the lasting legacy of WWII. During a moment of silence to recognize the lives lost during the war, a flock of birds flew over the crowd, a moment of serene beauty not lost on many in attendance.

Once all of the Rosies crammed into the park, it was time for the official count.

For five minutes they stayed in a roped off area with their Rosie outfits intact, after which time Acting Superintendent of the Park Sue Fritzke called out to the sea of Rosies, “I think we got it, guys!”  and the crowd erupted into applause.

Guinness is still tallying the official number of Rosies in attendance, but Radio Free Richmond invites you to count the number for yourself in our drone footage of the event.

RFR Gives You the Rosie Rally from Up High

The Rosie the Riveter Rally as seen from the RFR drone.