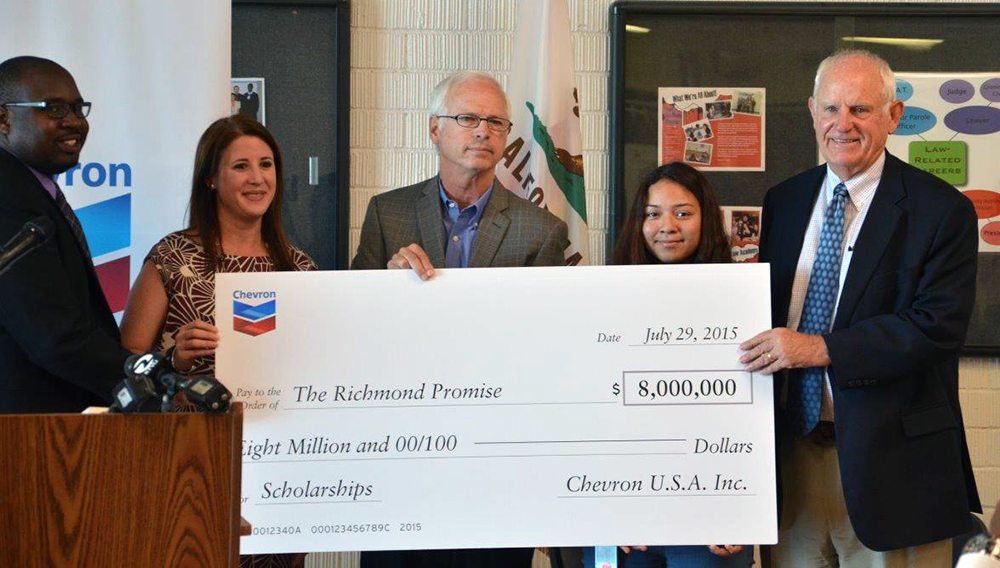 All students who live in Richmond and graduate from a public high school in the West Contra Costa Unified School District, including charter schools, will be eligible for the $35 million Richmond Promise program, which aims to offer each student enough tuition and support to make college both attainable and affordable, according to city officials.

On Wednesday, the highly-anticipated college scholarship program received its first installment of $8 million from Chevron Richmond, which is providing the full $35 million over 10 years as part of a $90 million community benefits agreement with the city connected to the upcoming $1 billion modernization of the Richmond Refinery.

The goal is to begin doling out scholarships for the Class of 2016, the city says.

An ad hoc committee convening community leaders and school officials has been appointed to hash out some of the program’s details, and there’s still work to do. But we’re told the scholarship amount likely won’t be the same for every student, but rather reflective of the student’s financial needs. Program officials also intend to help students obtain federal student aid as well as other outside grant and scholarship options so that Promise funds can be extended to the most possible students.

The city has also set a goal of raising $150 million in additional funds from foundations and private individuals to keep the program going beyond 10 years.

The program is not just about writing a check, but making certain students are college ready, City Manager Bill Lindsay said. With help from nonprofits such as College is Real, the program intends to create a new college-going culture in Richmond’s public schools, he said.

College is financially out of reach for many families, creating little incentive for students to perform in the classroom. But students who are willing to do the work should be able to concentrate on their studies and not scraping enough funds to get into college, said Mayor Tom Butt, who first proposed the idea of the Promise program after being inspired by a similar program in El Dorado, Ark. He said the program has proven in El Dorado to raise academic standards and ultimately create a college-going culture.

“All [students] have to concentrate on is simply being academically prepared to go to college,” the mayor said.

Another champion of the program, Vice Mayor Jael Myrick, called the program “transformative” and “game-changing.”

“This is real; this is happening,” he said. “We expect young people after high school to still be in school.”

For Richmond High senior Itzel Gonzales (pictured above), the program will help her to become the first member of her family to attend college. Gonzales, who has been interning this summer as a researcher for Chevron, aims to pursue a degree in bio-medical engineering at UCLA.

“Knowing these funds will be there will give me the extra motivation to go to college,” she said.

Chevron Richmond pledged to provide ongoing support college-readiness, calling the Promise program one of its most important community investments.

“Chevron depends on a highly-skilled and educated workforce to meet our business needs,” said Jeff Hartwig, manager of the Chevron Refinery Modernization Project, adding the company wants to hire its future engineers and scientists from Richmond schools.