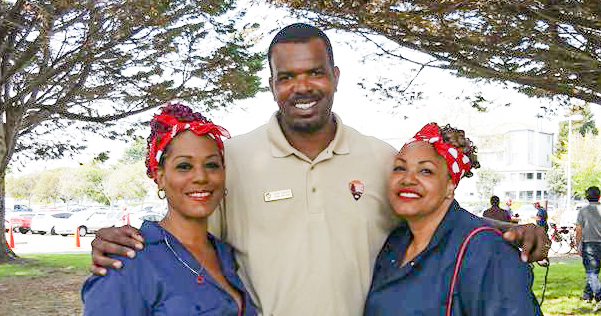 Slaughter’s role as Urban Fellow sprang from the National Park Service’s Urban Agenda Initiative. Richmond is one of 10 cities across the US selected to take part in the Model City program as part of the initiative, which aims at increasing the role and support system of parks for communities in urban areas.

With eight years as a City Planner in Richmond under his belt, Slaughter is particularly qualified to fill the roll of Urban Fellow. Slaughter helped develop the City’s Bicycle, Pedestrian, and Parks Master Plans in addition to working on improvements to the San Francisco Bay Trail around Richmond’s national park.

Throughout his work, Slaughter built connections in city government and in the community which trained his ear to be responsive to the people on the street while keeping an eye out for where to avoid red tape.

“Having Kieron as the Urban Fellow will ensure that the goal of extending the legacy of our National Parks is met with success,” Mayor Tom Butt said in a statement about the initiative.

Throughout his two-year tenure as Urban Fellow, Slaughter will work as a liaison between the National Park Service, Richmond, and the community to find common goals and execute projects to benefit the city.

“There’s a lot of great work happening in Richmond,” explains Slaughter. “It’s just a matter of listening and working with community groups to see if I can find ways to connect the work that’s already being done with support from the National Park Service.”

One of Slaughter’s first projects as Urban Fellow was to help plan and coordinate the Rosie the Riveter Rally in mid August, a record-breaking event where more than 1,000 women dressed as Rosie the Riveter gathered at the Richmond national park. To Slaughter, the diverse, progressive heritage of Rosie is especially relevant in Richmond and in the role of the National Park Service today.

“As the demographics of the United States change, you want to reach out to millennials and people of color and really reinforce that these parks belong to them just as much as they belong to other folks who may typically visit the park,” Slaughter explains.

While Richmond’s Urban Fellow won’t unveil his long-term plan for the City quite yet, he does hint that it will have a focus on Richmond’s Health in All Policy, a comprehensive approach to health adopted by the City.