Council members Beckles, Willis and McLaughlin took exception to this appointment and shot it down.

There has been great concern in Richmond regarding the perceived takeover of the Council by the Richmond Progressive alliance--which now holds five of the seven seats.  And with Jael Myricks often voting with the RPA-5, there have been concerns voiced about whether the many non-RPA members in the CIty will be represented at all. In the past, at least two members of the Council who held high ranking positions in the RPA wrote in emails that they refused to listen to people who disagreed with them.

Many have voiced their concerns after this vote about the political nature--the payback nature--of this vote and see it as laying down the groundwork for what’s to come.

Many other committee/commission members who have their own appointments up for renewal in the near future or those that were considering serving the City worry that any consideration of their future may depend on whether that applicant has drank the RPA Kool-Aid.  Will all applicants now be required to swear their allegiance to the tenants of the RPA if they expect to have their appointment approved?  If they don’t, should they expect the RPA members of the Council to publicly humiliate them?  Do qualifications matter any more or has it come down to political ideology?

Earlier today Mayor Tom Butt posted the following commentary on his eforum.  Included was a letter from an unnamed Richmond resident that eloquently voiced concerns about what happened with this vote.

From Mayor Tom Butt: I was surprised last week at the rejection of my nomination of former council member Vinay Pimple to join the Citizens Police Review Commission. With Eduardo Martinez absent, Vinay fell short one vote of being appointed. Beckles, McLaughlin and Willis voted no or abstained, blocking the appointment. 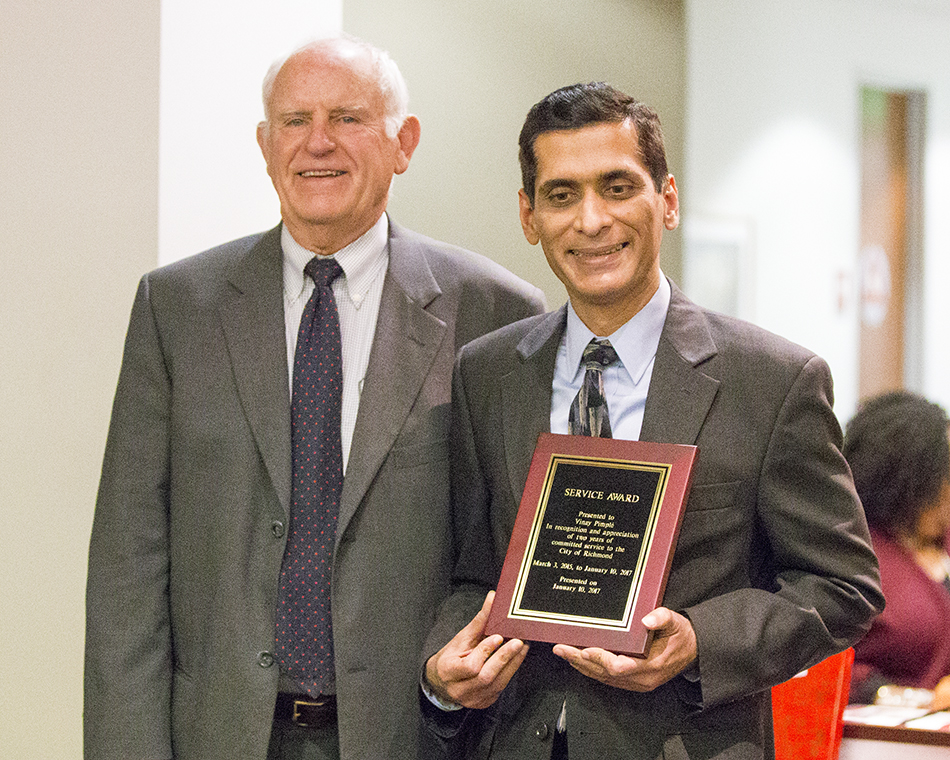 Rather than comment on this directly, I want to share a letter written to RPA City Council members and copied to me by a former RPA supporter living in the North and East neighborhood of Richmond:

Some of you know me as a longtime supporter. At this point it is more accurate to say I am a former longtime supporter, but I am still a Richmond resident, taxpayer, and voter, and I pay close attention to what's going on with the council.

The prospect of an RPA super-majority did not sit well with me, and as such I did not support the group's slate in November. My misgivings and unease about having all power concentrated in one group of very like-minded people, who all too often seem to think and act in lockstep and don't play well with others, were confirmed last Tuesday by your votes on the matter of the Vinay Pimple appointment to the Police Commission.

Gente, I watched this discussion with horror. I was ashamed for you. Jovanka got the ball rolling by expressing her "concern about Vinay." This was concern-trolling at its finest. You went on to say that you "appreciated Vinay's desire to serve," BUT there was that troubling vote - which you misrepresented, Jovanka, and which Vinay later corrected in his comments at the podium - along with "several other votes" that you were "at a loss" to remember, but whatever they were, they were a "problem." Then you added, patronizingly and dismissively, that Vinay was "amazing with numbers."

Melvin, in his comments, was equally vague, citing unnamed objections from "some people in the community." (How many people? Who, exactly?) What does this remind me of? Hmm, Donald Trump always using the "some say" cudgel to disparage his opponents. Could that be it? And on what basis are you implying that Vinay is anti-community? Why couldn't you name one specific reason to support that stance?

Gayle picked up the ball, suggesting that there must be some other commission on which Vinay could serve. You circled back to that troublesome vote, Gayle, admitting that his idea of a 72-hour hospital stay resulting from a police officer incident before automatically triggering an investigation was eventually what the council adopted, but he had "resistance" to the RPA's original proposal, a "difference of opinion," so you could not support his appointment.

Apparently differences of opinion just aren't allowed? Consensus is a dirty word? That purity test approach - how's that working for you? For us residents?

As Jael correctly noted, having a difference of opinion doesn't mean people can't work together. In fact, having lots of different perspectives, experiences, and ideas brought to bear on any given issue is a POSITIVE, not a negative.

Gayle, you correctly noted that in the recent past certain planning commissioners received No votes from Nat Bates (and probably Corky Booze), but the appointments in question were never in danger of failing. So there's really no comparison to last Tuesday's nakedly political machinations.

Thank you, Ben, for your altogether reasonable vote to support Vinay's appointment. He would have made an excellent Police Commissioner due to the entirety of his professional and personal experience, not just his "amazing" aptitude for financial analysis. Watching him be smeared so condescendingly and so unfairly by his former colleagues on the council was something I will not forget.

You might ask why I never joined the RPA, given this level of support. Here's why:

Back in 2003, a couple of years after I'd moved to Richmond, I was happy to discover, via an online forum, the existence of a group called the Richmond Progressive Alliance. At the time I was very active in Howard Dean's presidential campaign and was hoping to connect with fellow Dean supporters. Foolish, stupid me: I quickly found out that this was the wrong place. Someone in the forum named Juan Reardon was busy excoriating such views. Anyone who wasn't supporting Ralph Nader for president was a useless idiot. The harsh, searing tone of everything he said was so repellent to me that I left the forum and never returned.

That was my first impression of the RPA. It was so ugly that I nearly declined the invitation, by my neighbor Jim Jenkins, to attend a fundraiser at his home for Gayle's first council run when Jim mentioned that Juan was her campaign manager. I ended up attending the event, but with great trepidation. Eventually I felt that Juan was sufficiently in the background so as not to pose a threat to me. And I'm not exaggerating: he struck me as a nasty bully -- an impression that remains to this day.

When the RPA3 were seated on the council in early 2015, I detected a major change in comportment -- more explicitly ideological positions, less cooperation with fellow council members, more disrespect in general, less tolerance for anything but EXACTLY the views they espoused (as witness, finally, the disgraceful vote on Vinay). During this same time, Zak Wear was assuming a truly vile presence as the RPA's online spokesman -- apparently he was in charge of membership? That is rich, because he excelled at repelling people with his bottomless self-righteousness and inability to allow people to hold opinions other than the ones he deemed acceptable. I witnessed him lecturing Chris Magnus, condescendingly, on correct police practices. He had the audacity to lecture David Gray on the realities of being a black man in America. And on and on.

This was and is the face of the RPA today: intolerance and divisiveness. I want no part of it. You guys seem to be drunk with power -- no different from the Republicans controlling all three branches of our federal government, or any number of other power-mad types over the years. Over the centuries, really. I hope we survive you.

Of course, maybe you'll find it in yourself to operate henceforth with more humility, more inclusivity, and more appreciation of the fact that other people's views may indeed have validity. Remember "One Richmond," Gayle? Those were the days. You could help bring them back, if you wanted to. And you, Jovanka, and Melvin could consider apologizing to Vinay Pimple for last week's massive, uncalled-for diss.