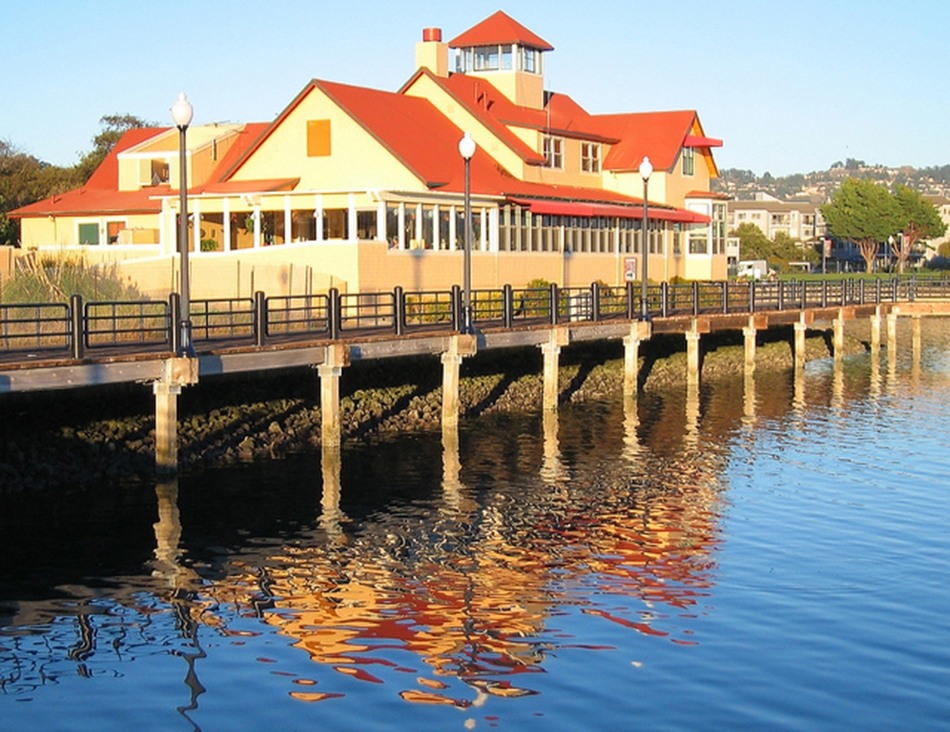 July 6, 2018, will be a sad day in Richmond for both the patrons and beneficiaries of Salute e Vita Ristorante and its iconic owner, Menbere (Menbe) Aklilu. 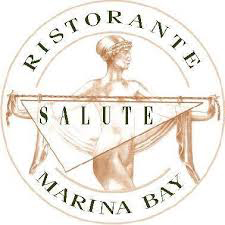 Originally named “Hawthorne’s,” The restaurant was built by the Poe family, the master developers of Marina Bay, back in the mid-1980s. It was a maritime-themed place built around a made-up legend of an imaginary old Captain Hawthorne who once resided there. The restaurant was also a product of negotiations between the City of Richmond and the Poe family for the Marina Bay master developer contract. The Poes, operating most recently as “Virtual Development Corporation,” were more master brokers than master developers. Their contract allowed them to “take down” numerous predefined parcels at an agreed price from the Richmond Redevelopment Agency and resell them to actual developers for whatever profit they could gain. Because the City wanted to see something attractive on the site as soon as possible, the restaurant was required to be built in a relatively short time frame.

At first, the Poes tried to run Hawthorns but were not successful. In the early 1990s, the restaurant was leased to the owners of a restaurant in San Rafael who were operating a popular and successful Italian restaurant named Salute Ristorante. The new owners expanded to Richmond and changed both the name and the décor of the Marina Bay location to Italian and operated it until 2002. In 1995, Menbe went to work for Gino, the owner, as a hostess.

In 2002, Salute went up for sale. When a customer asked Menbere if she was considering buying it, she looked at him dumbfounded. Not only did she not have the money, but she did not want to take the risk of losing her house, let alone face being homeless again. He told her, “I will loan you the money. I see the way how you work — you are a hard worker — you deserve to own this place.” He loaned Menbe $500,0 Menbe has been the proud owner of Salute for nearly fifteen years, establishing a beloved Richmond community staple. “A lot of people they didn’t believe in me. ‘Oh my God, Menbere Aklilu? A black woman and immigrant, and she wants to run this beautiful restaurant? Oh, no way. She can’t do it. She can’t do it. She can’t do it.’ But, I did it. And I am proud of it.” Menbere herself has become a beloved fixture in the East Bay, receiving the 2016 Women’s Hall of Fame Award with special recognition from the U.S. House of Representatives. Most of her customers are regulars, swept up not only by the heavenly scent of Penne Arrabiata and Calamari Fritti wafting from the kitchen, but by the unparalleled level of service consistently delivered at Salute. Menbe makes you feel at home. (https://bondstreet.com/blog/menbere-aklilu-interview/) 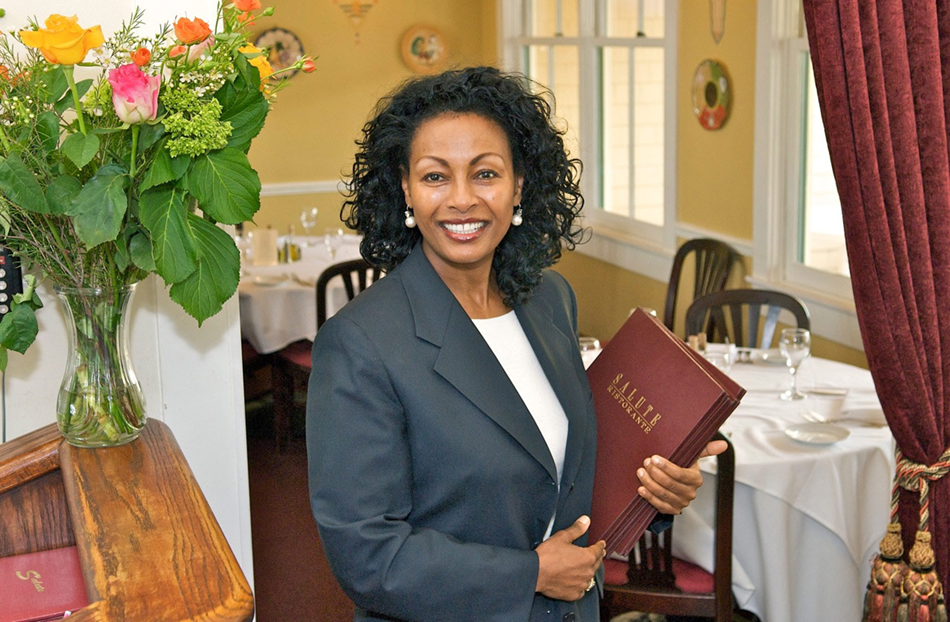 For years, the Poe family has been charging Menbe rent that is twice, or more, than comparable local market rent, but with business success and no viable alternatives, she has been able to pay it and make it work. For the Poes, it has been a goldmine. For Menbe, I has been a constant headache. She has been unable to negotiate a reasonable lease and has been  running on a month-to-month arrangement for years.

The tipping point came when the kitchen floor of the 30-year-old restaurant had to be torn out and replaced due to decades of water exposure from kitchen cleaning and a defective waterproofing system. The repairs would take months and would require removing and reinstalling all of the kitchen equipment, a project costing hundreds of thousands of dollars. Instead of taking responsibility for the failed floor, the Poes blamed it on Menbe and insisted that she pay for it, either up front or amortized through yet even higher rents on top of already unreasonable amounts.

The Poes remained intransigent, and Menbe appears to have walked away from it all.

Menbe has not only become Richmond’s best known restauranteur but is also Richmond’s best-known philanthropist, raising and donating hundreds of thousands (maybe millions) of dollars and services to the homeless, youth, and to a shelter for girls in her native Ethiopia, to name a few beneficiaries. Her inspiring life story will soon be published in book she has written, and there are rumors of a film.

Instead of being remembered as the master developers of Marina Bay, the Poe family’s lasting legacy, unfortunately, will simply be putting one of Richmond’s most inspiring citizens out of business. 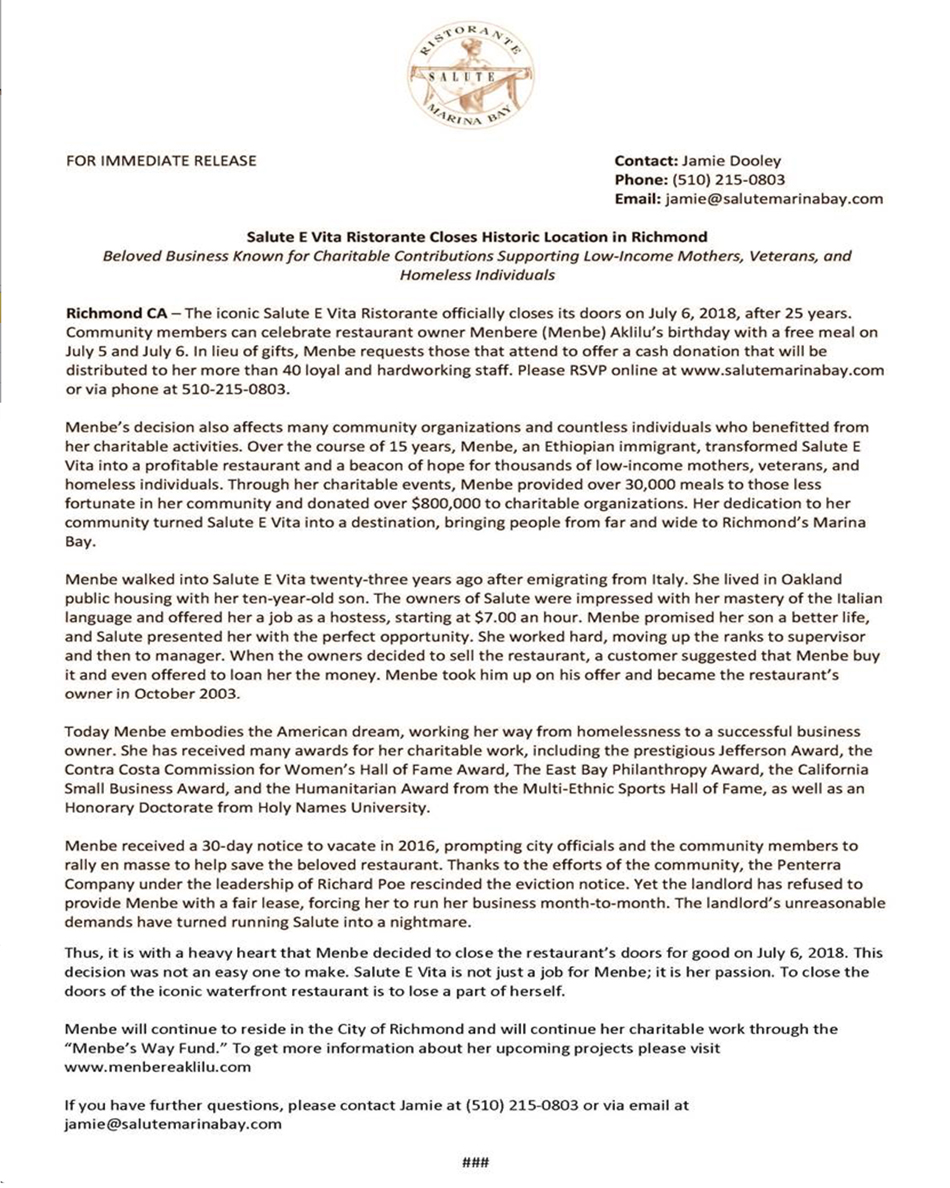