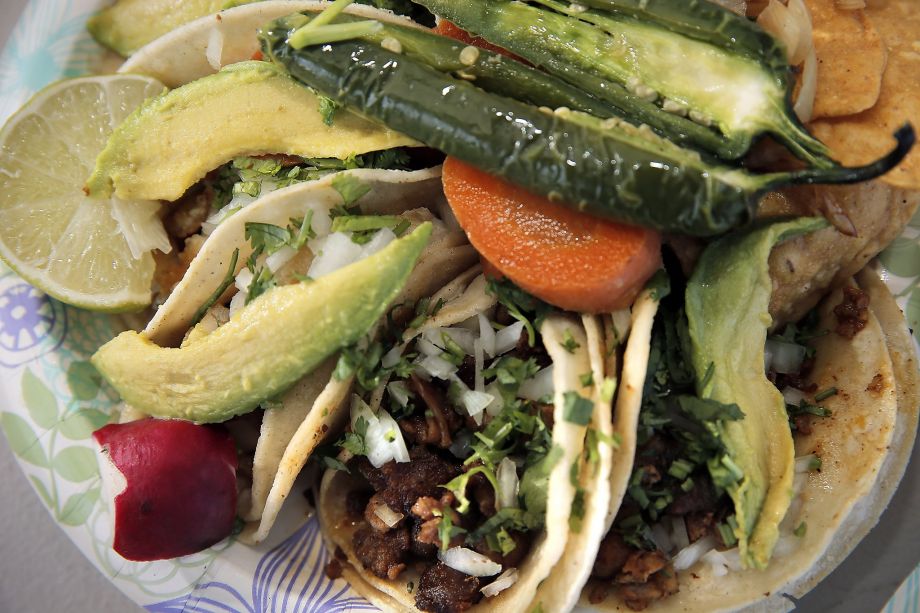 “I think I’m going to get old in there,” says Juan Carrillo, speaking softly and deliberately as he gestures toward his taco stand, Tacos Los Primos.

Since 2002, Tacos Los Primos has occupied the parking lot of a Richmond supermercado. Carrillo’s daughter, Dulce, wears a Ramones shirt and fluidly fields orders from a tiny window. The Instagram account advertised on the front window was her idea. Carrillo’s wife, Maria, makes the grill sizzle. The summer heat turns the trailer into a seething furnace, but, sitting under the tent next to his stand, Carrillo appears cool and unruffled.

And he’s hardly the only one to park in Richmond. The U.S. Census does not tabulate taco-stand-per-capita figures, but if it did, Richmond, the history-rich port city of over 100,000, would have to rank high among Bay Area urban areas. Exceptional Mexican street food — taco trucks and stands — is an essential component of this city with a grim reputation.

There’s El Kora nestled between a market and a Boost Mobile store at 23rd and Grant. There’s the Tacos La Raza stand protruding from its carniceria mothership at the corner of 22nd Street and Macdonald Avenue. A guy hawks posters in the parking lot. Through the barred window, a cook cleavers columns of fat-laced steak. The standout carnitas are slippery, hacked-up nibbles topped with charred Serrano peppers. At La Flor de Jalisco, they are dry, fat-crisped strands. One of this taqueria’s roving trucks usually hugs the side of a laundromat just a few seconds from Tacos Los Primos. Next to the adjacent picnic tables, a girl in a floral-patterned dress chases pigeons, a taco dripping from one hand. When it comes to carnitas, Tacos El Agricultor’s luscious, sweet, pillowy tangles of pork might prove the finest rendition. But you might prefer one preparation on one day and another the next. You might want one after the other. In Richmond, that’s easily done.

Richmond is a city in transition, where huge swaths of the population have come and gone over the decades. In 1990, Richmond was 44 percent African American. In the past 15 years, that population has decreased by over a third while the Latino population has risen to about 40 percent. Now, one-third of Richmond residents were born in a country other than the United States, and nearly half speak a language other than English.

The cityscape reflects this change. The five miles of 23rd Street stretching from the Interstate-580 exit to Richmond High School are a blur of body shops, check-cashing establishments, Mexican groceries, quinceañera and bridal clothing stores, barbers, nail salons, evangelical churches and fast food restaurants. McDonald’s wrappers hum like tumbleweeds over the concrete, but the sky that flattens out overhead and disappears beyond the surrounding hills is a clean sapphire. On the side of the road, fluttering banners advertise in Spanish and English. Walking through the surrounding residential streets, the beige, pink and baby-blue stucco homes sport more American flags than I see driving around my hometown of Louisville, Ky.

The city has suffered from economic decline and high crime since the early 1970s. In 2010, Time Magazine saddled Richmond with a No. 6 ranking in its list of America’s most dangerous cities. However, by 2014, Richmond was reporting its lowest homicide rate in 33 years, and today investors from outside the city are certainly taking note of Richmond’s relatively affordable real estate market and safer streets. But the city remains working class, largely untrampled by tech workers.

This is the community that spawned the trucks and stands; in return, the trucks provide inexpensive yet serious food: tripitas, sesos and all, culled from family recipes. Home cooks, not chefs, own the trucks. They are subsistence-level businesses, not necessarily precursors to brick-and-mortar restaurants or chains. A few, like Tacos Los Primos, use social media, but most operate entirely in the physical realm. A few accept only cash as payment. For people like Juan Carrillo, a truck also provides a living.

When Carrillo was 16 years old, he left his Mexican home state of Michoacan for the United States. He picked grapefruit outside of Fresno and followed growing seasons as far north as Washington state. When he arrived in California with only an uncle for support, he had no idea that he would be expected to attend high school. He just wanted to work.

When he did take some classes, he focused solely on bolstering his English-language skills. Carrillo wanted to be a waiter, but he was nervous about conversing with customers. So, he tried school for a few months.

“I wanted to see how the sentences were put together,” he says. Soon, he was back, much more comfortable with English, waiting tables as he’d hoped.

“That was my time,” he says, a little wistfully. “I had my regulars, and they’d be so happy to see me. I liked how tips worked. If I did a good job, I’d earn more.”

In the meantime, just as he’d soaked up English, Carrillo took mental notes on the work of running a kitchen. He waited tables for seven years until his cousin suggested they partner up to buy a taco truck.

“While I had fun waiting tables,” says Carrillo, “there was more profit in owning my own place. I discovered that, when I owned something, although I had taxes and a lot to deal with, I wanted to do everything right. I had to.”

Doing everything right means waking up at 4 a.m. almost every day to chop vegetables, make salsa and prep meats with his family, staying open until 9:30 p.m., and finally cleaning up by 10:30 p.m. Carrillo, who is now the truck’s sole owner, had to sell a second truck he once ran on 13th Street.

“I was killing myself running back and forth,” he says.

Even with two once-dedicated employees off on new career paths — one son in the Navy and another a busy hair stylist — Carrillo says he’s working “a little easier” now.

“I take a few hours off in the afternoon,” he says.

The complexity of carnitas

Three miles to the southwest, across I-580, Tacos El Agricultor sits next to a Quality Inn. A plumber hunches in the front seat of his work truck and polishes off six meat-heaped tacos organized in a pinwheel around radish chunks, pickled carrots and lime halves. A kid leans over the hood of his muscle car to take a bite and drips glittery salsa across the matte paint job. The neighboring Chevron provides a steady stream of commuters and local workers.

Cornelio Navarro co-manages El Agricultor in shifts with his father, who worked construction until he injured his shoulder. Before Navarro came from Michoacan to California, and the whole family settled in Richmond, his father spent 20 years laboring in fields outside of Salinas for low pay. The name El Agricultor, which means “the farmer,” was inspired by his father’s sacrifice and frugality, which enabled the family to buy the truck. The name also references the 300-acre Navarro rancho back home, where his father heads for periodic three-month visits to plant and harvest corn and wheat.

Although the family cooks meats on the truck, Navarro’s mother preps food at home beginning at around 3 a.m. By the time the first wafts of bubbling beans emanate from her stove, Navarro often finds himself washing down the truck’s interior, scouring the previous day’s grit, and preparing for the onslaught of smoke and grease to come.

Although in Richmond there’s no evidence that taco truck proprietors maintain any formal agreements about pricing and territory, a handful of quarters earns a taco almost anywhere. No proprietor pushes crummy 80-cent tacos to filch less-discerning customers. Each truck delivers a notable twist or two. El Kora offers tacos topped with a beautifully rich birria, or stewed goat. Tacos La Raza crowns plates with a half-melted spring onion bulb. La Flor de Jalisco has an especially fresh green salsa. When you eat your way through a dozen trucks over the course of a few weeks, coming back for return visits aplenty, you appreciate the dramatic diversity among the same dishes as well as the sheer brightness and complexity of the flavors on display.

When I tell Navarro that El Agricultor’s carnitas cause my car to make abrupt, unanticipated turns off I-580 on my commute home, he smiles, clearly proud of his food.

“They’re all family recipes,” says Navarro. “My mom cooks, but I know them, too. I make sure everything tastes right.”

When asked if he eats the same carnitas at home, Navarro sighs and deadpans:

Andrew Simmons lives in Oakland. He writes for the Atlantic, the New York Times and other publications. Eric Giovany Noh assisted with translating.

The taco trucks of Richmond

El Kora: (23rd and Grant). The birria tacos are rich, spicy and addictive.

La Flor de Jalisco: (23rd and Clinton (laundromat) and 2409 Macdonald). The carnitas are drier than some but intensely flavored and crisp; try them with the green salsa.

Reposted from the San Francisco Chronicle