San Francisco Magazine: From 'Armpit of the Bay Area' to a Progressive Utopia on Earth 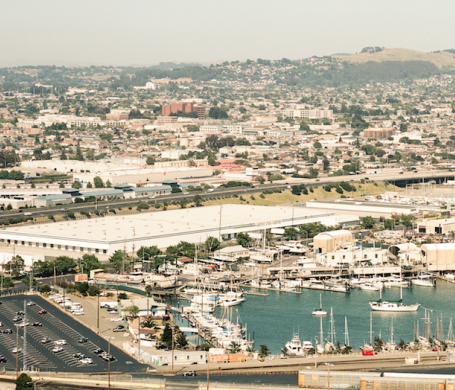 High atop the hill known as Nicholls Knob, you can see everything in Richmond. Within your gaze are pockets of deep poverty and clusters of dot-com era homes so big they resemble fire stations. To the north lie the terra-cotta–hued tanks of the vast Chevron refinery, and to the west sits the antiquated pier that once marked the terminus of the Santa Fe Railroad. Blocks of cookie-cutter suburban-style palaces sprout from a formerly contaminated World War II shipyard, while the white roofs of countless Subarus off-boarded at the Port of Richmond speckle the sprawling waterfront. Looking out on this polyglot panorama, you can understand why aspirational city planners envision a new era for this once destitute town—an East Bay Emerald City, just waiting to be born.

Richmond’s proximity via road, rail, or water to everywhere else in the Bay Area is no secret—as evidence of its prime location, a million square feet of new warehouse space is in the pipeline here. But lately the city has been attracting a new breed of enthusiast: those who see the former murder capital of the Bay Area as the perfect—and perfectly affordable—melting pot for eager would-be homeowners. A ferry line to San Francisco is described as “a done deal” by Mayor Tom Butt, who points out that Richmond’s three-year-old General Plan up-zoned vast swaths of land, adding a potential 50,000 new units in a city whose population is currently only 107,000. Future Richmondites, Butt believes, may be able to enjoy the car-free lifestyle generally afforded the young and affluent, floating to and from their hypothetical waterfront condos and their real San Francisco jobs.

If you will it, it is no dream. And Richmond is in the midst of a turnaround that only a few years ago would have seemed fanciful. For decades Richmond was known for its “three Cs”—crime, corruption, and Chevron. Of the three, crime was by far the most pernicious. In 2006, there were 42 murders recorded here—more than seven times the national rate (similarly populated Berkeley tallied 4 killings that year). To protest the spiraling homicide count, desperate activists pitched tents in the city’s blighted downtown amid the ubiquitous shrines to the dead. Also in 2006, a funeral for a shooting victim descended into chaos when a pallbearer shot a mourner. In the years that followed, funereal gunplay erupted frequently enough to inspire a 2010 New York Times trend story.

That was then. These days, Richmond’s dark past seems more and more like a half-century-long bad dream. Innovative programs aimed at the city’s most vulnerable—and violent—residents, along with a revamped police force, have led to dramatic reductions in crime. Eleven homicides were recorded in Richmond last year, compared to 47 in 2009 and 62 in 1991. Homicide tallies undulate in national cycles—but in Richmond, nearly every statistically recordable crime is down: Over the last decade, violent crime has dropped by 23 percent and overall crime by 37 percent.

Vastly reduced crime is not the only marker of progress in Richmond. Unemployment has fallen from 18.5 percent in 2010 to 5.8 percent in March. Optimism is up. Blight is down. Bonds are no longer junky. Municipal buildings and parks have been retrofitted and rebuilt. Crumbling prewar edifices have been repurposed into gleaming new homes for forward-thinking businesses that don’t belch out acrid black smoke—the sort that civic leaders hope will define Richmond’s “postindustrial economy.” Commercial and residential developers are once again eyeing Richmond’s possibilities. City politicos hope to lure scads of new residents, creating a place both materially and culturally richer. A glut of new companies have set up shop: Richmond, once the home of Rosie the Riveter, now bills itself as the place where entrepreneurs can take their ideas to scale.

Local government, long a byword for cronyism and incompetence, is not only functioning—it’s breaking new ground. Richmond may this month begin issuing millions of dollars’ worth of “social impact bonds” in a novel effort to rehabilitate abandoned homes and aid first-time buyers. Its General Plan, uniquely, requires virtually every municipal decision to factor in the mental and physical health of its citizens.

Richmond, a city whose population quintupled during World War II, is transforming itself again. But a burning question remains: Will all of the city’s residents benefit equally?