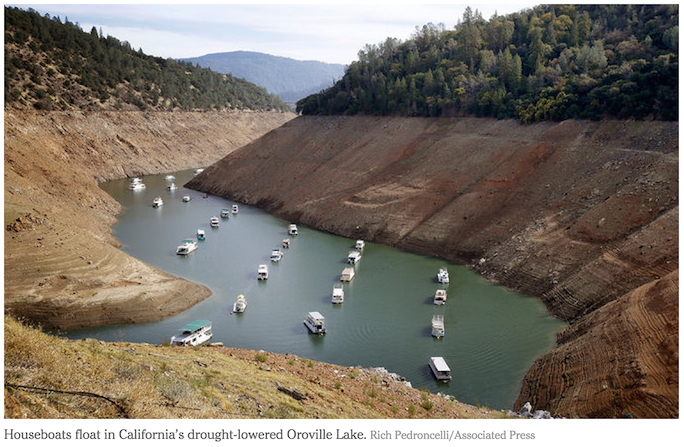 Californians need to cut back on water consumption by 25% — immediately.

The order was first issued by Governor Jerry Brown in early April in the first mandatory water restriction in the state’s history. Then last week the East Bay Municipal Utility District (EBMUD) — which supplies water for Richmond and several other East Bay cities — upped the pressure: cut back on water, or pay high prices.

Rates across the board will go up 8% starting July 1 to cover costs of transporting water and to discourage excessive use of water, and more rate increases of up to 25% could be imposed upon households which use “excessive” amounts of water.

These actions come as state’s water reservoirs reach their lowest levels in years. The Pardee reservoir, which collects water from the Sierras for much of the East Bay — including Richmond — has had a dramatic decline in recent years. The reservoir was at 83% capacity in March of 2010. That number dropped to 62% in 2014, and the reservoir is now at just 53% capacity.

Nelsy Rodriguez from EBMUD estimates that the Pardee reservoir holds enough water to cover Richmond and other East Bay cities through 2016, but cautions that “we don’t have a plan for after that.”

Until we get rain, there are a number of things you can do to conserve water at a daily level.

“This is the time to get control of your water,” Rodriguez says. “The first and least painful thing you should do is fix any leaks in your home.”

To Rodriguez, a sea change in thinking about how we use water is required to make any significant impact. Water is vital to our lives, and it should be used sparingly. EBMUD advises that anything superfluous requiring water will have to go.

“Richmond and areas with many single family homes tend to like lawns, but they are only ornamental. They have no affect on whether we live,” Rodriguez explains. “We need to save water for what we really need it for.”

Whether self-directed or not, Rodriguez points out that current state restrictions on watering will make it difficult to sustain traditional lawns. “Grass lawns require a great amount of water to stay green,” explains Rodriguez. “Adhering to state regulations, people are going to have brown spots.”

EBMUD suggests that if people want to make their yards more drought resistant, this summer is an opportunity to let it molt so they can make it into something more sustainable in the fall. There are many ways to do this, from putting in rocks to planting drought-tolerant plants.

Four years into a record-breaking drought, the responsibility for individuals to conserve is greater than ever. For an interactive way to learn about how to conserve water, click here.