SF Chronicle: The most annoying left turn in Richmond

Turning left onto the Interstate 80 West on-ramp from Barrett Avenue a few miles from downtown Richmond can be a lesson in risk taking.

Drivers headed west on Barrett Avenue near 44th Street creep forward trying to find a momentary gap in the two lanes of oncoming traffic, and because the left turn is unprotected, traffic headaches abound all around. 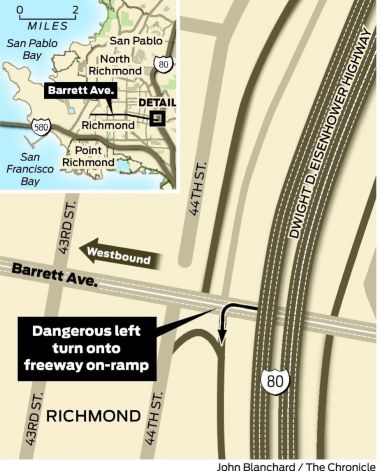 Count El Cerrito resident Jason L. Fong among those with the headaches.

"You're waiting five minutes to go on the freeway, it shouldn't be that long," said Fong, a 35-year-old freelance TV producer who often makes the drive.

The two lanes of oncoming traffic and a bike lane flow steadily during rush hour. There are near misses, honkings and nervous drivers as people try to get on the freeway toward San Francisco or Oakland.

A Chronicle reporter was stuck behind a driver who waited two light cycles to make a left turn one recent late afternoon. Jason's father, Gary, a 71-year-old man who lives in the area, has frequently experienced similar waits.

"I've waited there three signals before I could turn" he said. "Some people are afraid to make a left turn with people coming at them, others burn rubber to make the left turn."

Fong and his father think a protected left turn would help.

They say things got bad beginning in December when the city added bike lanes to both sides of Barrett Avenue. The city also made a change to traffic patterns that the pair think has increased the flow of oncoming traffic.

"It never used to bunch up that much," Gary Fong said.

Steven Tam, a senior civil engineer for the city of Richmond, said they're aware of the issue and are working with Caltrans, who they say is responsible for the signal, to come up with the "best possible solution."

"We're researching (the issue) ... and we will respond as soon we get all of the facts," said Bob Haus, a public information officer for Caltrans District 4.

Issue: A precarious left turn onto the Interstate 80 West on-ramp from Barrett Avenue right before 44th Street in Richmond is causing headaches for local drivers.

What's been done: The city of Richmond and Caltrans are working on a solution.

If you know of something that needs to be improved, the Chronicle Watch team wants to hear from you. E-mail your issue to [email protected], or reach us on Twitter [email protected] and www.facebook.com/sfchronwatch.