SF Weekly: Fear From Above: Chemtrails vs. Conspiracy Theory in the Bay Area 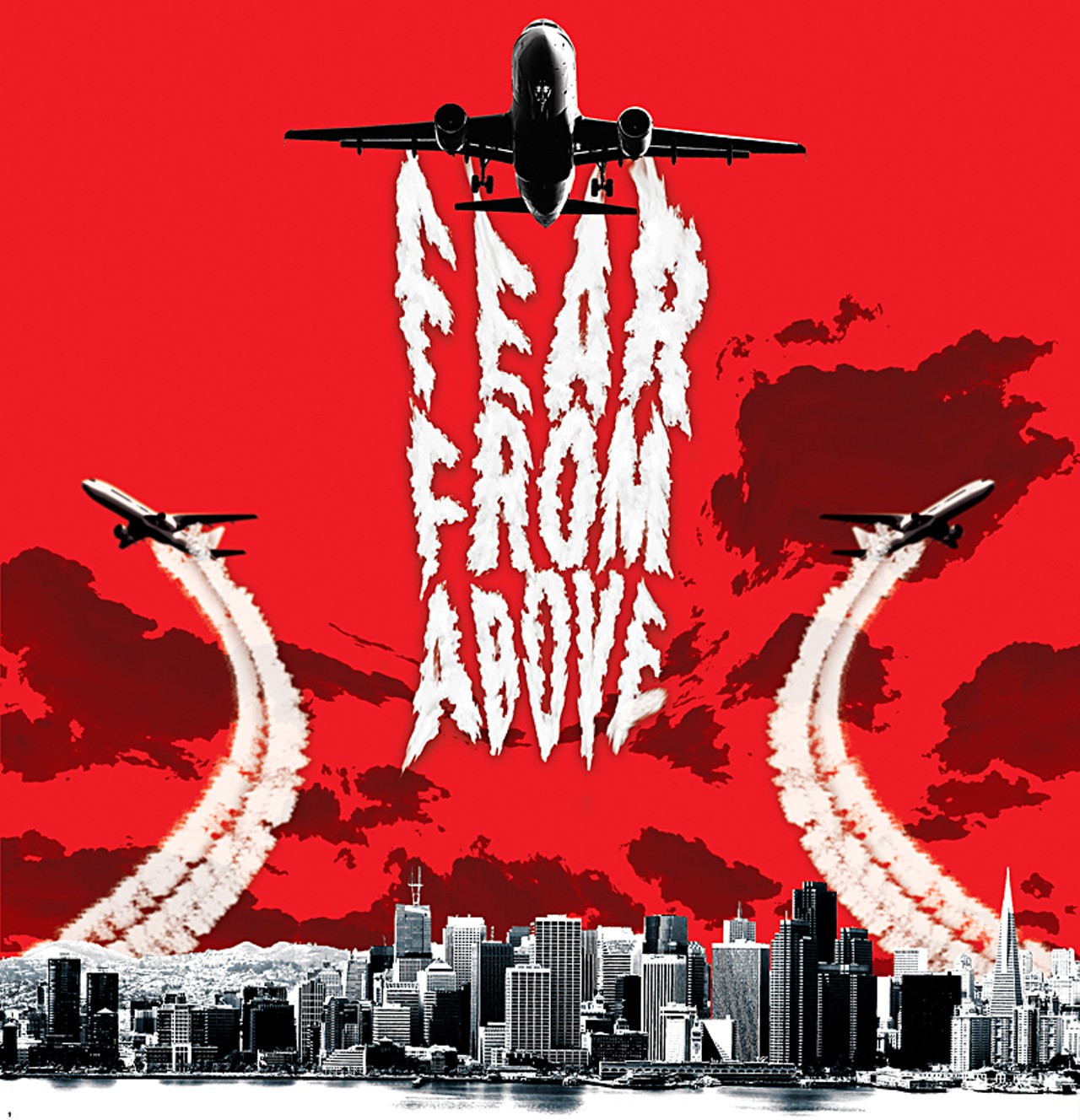 "If they can get you asking the wrong questions, they don't have to worry about answers."

Part I: Warriors for the Deep Blue Sky

Patrick Roddie films the sky every day. Two years ago, he rigged a camera on the roof of his apartment building in Lower Pacific Heights to record timelapses of the sun's dawn-to-dusk arc, along with the sky's usual bland traffic of birds, airplanes, and clouds.

Many of Roddie's timelapses — which he uploads to YouTube — capture something else, too: hazy, white threads that thicken in the wake of airplanes and sometimes tattoo the sky in grids. To the uninitiated, these are contrails, the harmless water vapor that commercial planes spume as they track across the sky at 30,000 feet. To Roddie and his followers, however, these are chemtrails, the toxic signature of a covert government program to slow global warming and control the weather.

Roddie, who was born in Belfast, has the beard of a Confederate general and the doggedness of a street preacher. His day job is photographing portraits, mostly of weddings and children (he also has a Burning Man portfolio dating back to 1998), but his passion is cataloging and protesting "the global chemtrails program."

Roddie runs a website, Stop Spraying Us - SF, helps admin a Facebook group called California - Bay Area Residents Against Chemtrails/Geoengineering that has more than 2,000 members, manages a YouTube account that's 200 videos strong (with most view counts in the low hundreds), leads small monthly rallies at City Hall and the Ferry Building, and travels widely to speak out against chemtrails. Roddie estimates that over the course of his three-year chemtrails activism career he's burned and distributed more than 30,000 informational DVDs.

Last month, he raised $5,000 on GoFundMe to fly to Paris, where he presented a paper to climate scientists about the health effects of geoengineering. And this month, he addressed a public Environmental Protection Agency hearing in Washington about the dangers of aircraft pollution.

If you ask him the million-dollar question — Why are they spraying chemtrails? — his stock answer is: "Because they're assholes."

"They" could refer to several nefarious actors: the U.S. government, the military-industrial complex, renegade scientists, old-money foundations, the U.N., or, most sinister and enigmatic of all, the New World Order. "It's a huge program," Roddie says, adding that "it" probably encompasses every airline in the world.

A thumbnail sketch of the science behind chemtrails is difficult because there are competing theories about what that science entails. But most activists, including Roddie, agree that curbing global warming seems to be the purpose. In layman's terms, chemtrails are believed to be an aerosol that contains aluminum (which deflects sunlight), as well as a cocktail of other toxic elements such as barium and strontium. According to Roddie, this aerosol has insidious side effects, including Alzheimer's, autism, asthma, respiratory failure, pulmonary failure, and stroke.

"It's like putting a Brawny towel over the sky," Roddie says. "Any time there's a storm approaching the California coast and you look on NASA's EOSDIS Worldview satellite, you can see a checkerboard of lines ahead of and on top of any storm coming in."

Mainstream scientists reject the "chemtrails conspiracy" — if they entertain it at all. Ken Caldeira, a climate scientist at the Carnegie Institute for Science at Stanford University who studies climate change, is barraged with chemtrails inquiries so often that he created a pro forma response. "Please do not be one of these people with no scientific literacy and who believe stupid stuff they read on the Internet," reads a sample line.

"I feel sorry for these people because they have no real way of finding out the truth for themselves. They trust people who believe false things," Caldeira says.

R. John Hansman, Professor of Aeronautics & Astronautics at MIT, offers a no-nonsense definition of those lines in the sky: "[They] are primarily water and are due to condensation of the jet exhaust when the relative humidity is high in the upper atmosphere."

And the U.S. Air Force has also publicly denied the existence of a chemtrails program. In the early aughts, the agency's website featured a notice declaring, "The Air Force is not conducting any weather modification experiments or programs and has no plans to do so in the future. The 'chemtrail' hoax has been investigated and refuted by many established and accredited universities, scientific organizations, and major media publications."

Nonetheless, Roddie has attracted a following of devout chemtrails believers in the Bay Area. Fifty-three-year old Val Hall is one of them. A landscape gardener from Richmond, Hall first learned of chemtrails from a young man who'd joined her work crew at a job in Point Richmond in May 2006.

The kid gave Hall a name for what she'd witnessed — chemtrails — and explained the various poisons strafing people in the Bay Area. Hall never saw the kid again after that day, but she began watching the sky closely, and in 2011 she went online to do her own research. That's when she found Roddie.

"I never wanted to be an activist in my life, but all of a sudden I had to be an activist," Hall says. She calls herself a "warrior for the deep blue sky," an allusion to her childhood in the Bay Area when the sky was a lush, cinematic blue instead of the "chalkboard" it is today. Hall now admins 15 different Facebook groups devoted to exposing chemtrails.

She's a valuable activist partly because she claims to suffer health effects as a result of chemtrails. Hall has Lyme Disease, for example, which she says worsens on heavy spray days. (A 2007 article in the New England Journal of Medicine disputed the existence of chronic Lyme Disease and concluded that such a diagnosis "is a misnomer, and the use of prolonged, dangerous, and expensive antibiotic treatments for it is not warranted.")

Hall says she protects herself as best she can, but as a gardener, she works outside every day and is vulnerable. She no longer drives with her windows down, she says, and she bought a water filter to sift out impurities. Occasionally, she detoxes from the heavy metals in her blood by taking supplements such as chlorella, zeolite powder, and bentonite clay. She also eats as much cilantro as she can, which assuages metallic contamination, she claims.

Rumors of sickness and bodily mutation run rampant through the chemtrails community. Hall mentions a fellow activist who tested her dog's blood for heavy metals and discovered thorium, a radioactive element that has been used as nuclear fuel.

She also mentions Morgellons, a controversial condition — classified by most physicians as a delusional parasitosis — in which people develop sores they believe to be caused by parasites, insects, or invasive synthetic fibers. In 2008, the Centers for Disease Control and Prevention investigated Morgellons among patients in Northern California, a hotbed of self-reported Morgellons diagnoses, and concluded there was "no infectious cause and no evidence of an environmental link."

Marsha Dawson, a North Bay activist who works with Roddie and Hall, agrees that chemtrails exact a disastrous human toll. She says she experiences "memory problems" and lung pain because of her exposure. Dawson drinks Fiji and Volvic water constantly because both contain silica that, she claims, loosens the aluminum particles in her body. She also finds relief in black cherry bark syrup from Whole Foods.

"I'll call my daughter to warn her, 'It's a heavy spray day, please don't go outside,'" Dawson says. "And she doesn't argue. She doesn't want to talk about it, but she'll say okay. She's young, only 25, so it's hard to face this is your world."

Dawson first learned of chemtrails in February 2014. She had recently retired as an administrative assistant, and with spare time on her hands, began sitting on her deck in Marin County. One day she noticed contrails runnelling across the sky. As Hall did three years before, Dawson turned to the Internet for answers.

"That opened a door that I wish many times I could close," Dawson says.

She joined Roddie's Facebook group. And later that month, during a trip to the San Joaquin Valley, she says she awoke in a little town to see planes spraying and chemtrails swelling like varicose veins across an ashen sky.

To make matters worse, Dawson believes there's a media blackout around chemtrails. The Weather Channel, she says, is owned by the same corporation that holds patents for weather control. (In reality, The Weather Channel is owned by a consortium that is itself owned by NBCUniversal, The Blackstone Group, and Mitt Romney's Bain Capital.) She notes that the Marin Independent Journal and the San Francisco Chroniclenever publish stories about chemtrails.

Many activists contend that journalists who investigate the spraying program risk being blacklisted. A case in point is Marcus K. Dalton, who in August 2005 published a two-part story about chemtrails in the Las Vegas Tribune. On October 21, 2005, barely two months after his story appeared, Dalton was fired, and the notice in the Tribune announcing his termination indicated that his wife, who sometimes contributed business articles to the paper, had also "been asked not to write anymore." All mention of Dalton and his articles has since been scrubbed from the Tribune's website.

High Strangeness, a blog about mysterious phenomena, posted an email purportedly sent by Dalton on November 18, 2005, in which he confirmed his dismissal was unrelated to the chemtrails story. "I moved away from Las Vegas," he wrote. But that hasn't dissuaded chemtrails believers from anointing him a martyr to their cause. (As of press time, Dalton couldn't be located, and neither his ex-wife nor the Las Vegas Tribune returned requests for comment.)

Roddie believes that whatever dark bureaucracy is behind the spraying program conditioned the public to accept chemtrails by foreshadowing them in pop culture. He calls this "the revelation of the method," a term popularized by the revisionist historian (and Holocaust denier) Michael A. Hoffmann. Roddie considers the body scanners in Total Recall an example of how the government introduces provocative technology under the guise of commercial entertainment.

"We're living in a script," Roddie says. Hall echoes him, noting, "Life seems to be like a scary science fiction movie now."