SHAWN DUNNING ~ IN HIS OWN WORDS

Radio Free Richmond’s policy is to post these candidate provided articles unedited.  What is posted is what is provided by the candidates. 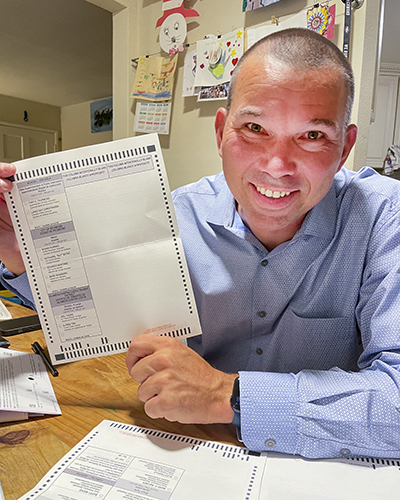 Chances are, most people reading this article have already learned about my platform and talking points (see DunningForRichmond.com), so I won't take up more space on that. Instead, I will briefly reflect on the experience of running for office, including what inspired me to do this, some highs and lows of the campaign, and my hopes for the future.

My decision to run for office--and, specifically, to go after the mayorship--did not come lightly. From a politically savvy standpoint, it would seem preposterous to seek the highest office in local government without previous elected experience. Traditionally, as one of my competitors has suggested, someone wanting to run for mayor would "work their way up." Perhaps cutting teeth with various commissions and local organizations, eventually aspiring to a council seat and, much later, consider running for mayor. That's the traditional approach. But my story is not about wanting to be mayor someday; instead, I decided to act immediately in response to a crisis today. More than wanting to be mayor, I wanted to see us solve problems more effectively in Richmond.

Had another candidate come on the scene who could transform Richmond's political vitriol, polarization, and stagnation into constructive progress, my preference would have been to support them rather than to run myself. I even tried to encourage a well-known community leader to go for it, and I offered to work full-time for their campaign, pro bono. They didn't want to do it, so by that point, I felt I had to give my best effort on my own. Leveraging the confidence of over two decades of conflict resolution and collaborative problem-solving experience in highly divisive contexts, I decided to go full steam ahead.

Within days of announcing my candidacy, I set out to publish a series of forums. Realizing that most people are unfamiliar with collaborative problem-solving, I initially aspired to roll out dozens if not hundreds of "Collaborative Community Forums," convening diverse groups around contentious issues such as housing, economic development, public safety, etc. After all, given that my chief motivation for seeking the mayor's office was for the convening power (to assemble diverse stakeholder groups for problem-solving), it only made sense that I would use the campaign as an "audition" so that voters could understand what I'm about and what could be possible with a new approach to politics. I knew it would be hard to convince them simply by talking about conflict resolution; they would need to experience it. As it turned out, though initial forums on economic development and public safety were well-attended, my "convening power" as a candidate revealed the dilemma of presuming to collaborate amid an inherently competitive process.

Whereas a future gathering by a mayor could be framed around common goals despite political differences, the overriding goal on the minds of many would-be forum attendees was supporting the candidate of their choice. Many of my supporters were fine showing their faces for those initial gatherings. For supporters of one of my electoral opponents, I could only assume they were less interested in showing up (except for a few individuals for whom I was grateful).

Though I could be wrong about the motivations of my forum attendees, one thing was certain from a very early stage: Most folks in Richmond had no access to the invitations. In a town of 116,000 residents, fewer than 6,000 are on the most active Facebook page, the broadest channel I had at my disposal. Word of mouth may have reached beyond those boundaries. Still, for whatever reason, my "experiential campaign" strategy involving thousands of voters participating in collaborative problem-solving was not to be. And so came the first central pivot of the campaign. Rather than hoping folks would come to me, I hit the ground running, literally, to go to the people.

Knowing that my outsider status would require me to work a hundred times harder than anyone else, I set the goal of running every residential street in Richmond (over 200 miles). As it turned out, between January and the end of October, I reached 500 miles, covering many neighborhoods 3-4 times! During the experience, I met over 5,000 people face-to-face--at least, that's how many calling cards I distributed along the way. The process was simple but required tons of effort. I tracked every run by GPS and slowly, day by day, chipped away at reaching all of Richmond. Rain or shine, cold or hot, I hit the streets, completing 138 runs in 296 days.

Though a bit cheesy, it never got old to answer the inevitable, "Why are you running for mayor?" with, "Because walking would take too long." Beyond a good conversation starter, that really did say it all. I recognized to be successful I needed to get everywhere and hear from as many people as possible. I figured that an hour of traditional door-knocking in strategic precincts would yield perhaps ten conversations in one block. In one hour of running, on the other hand, I typically had at least ten conversations with people who were already outside their homes, and I covered up to ten blocks! In other words, I could reach the entire city and hear from every corner. I was proud that I never asked anyone if they were a registered voter, nor did I ask for their vote. I simply asked, "If I get elected, what would you like me to know?" or "What should the priorities for Richmond be?" It didn't take long for me to reflect on all the encounters to realize the overwhelming consensus on a vision for a better and brighter Richmond that is Safe, Clean, and Fair, and thus my platform was born.

Though I enjoyed the candidate forums and debates and all the various public events, the greatest joy and motivation came from meeting with people from all walks of life in every neighborhood of the city. My #RunningWithShawnDunning days were, by far, the highlight of this campaign. Almost daily, I would update my Facebook and Instagram pages with my running tracks and anecdotes about the people I met along the way. The conversations ranged from ten seconds to over two hours. Occasionally, I was invited to sit down and enjoy a cold beverage. Several residents invited me into their homes to sit around the kitchen table or back deck. Selfishly, I feel like I've made hundreds of friends. Even the card-carrying communist who told me he would never vote for me left me with a feeling that we could get along just fine as neighbors.

When it came down to my qualifications and approach, I expected more pushback to my motivation of running as an independent-for-all to invite everyone to the table without anyone owning the table. As it turned out, I was pleasantly surprised to find that most folks found that mantra to be "refreshing" and "just what we need today." Interestingly, the most significant pushback came from those who would become some of my most passionate supporters. They would tell me, "Shawn, you gotta take a side and take a stand," etc. I would respond, "But I didn't do any of that to get your support..." The response was usually silent and profound. On numerous occasions, I heard from people who initially resisted my approach but came to me days later to explain that, upon reflection, they were totally on board. It's not easy getting away from the traditional paradigm of divisive party politics.

Speaking of traditional politics, the lowest points of the campaign had nothing to do with the people I met, regardless of their perspectives. The frustrating aspects had nothing to do with my opponents on the ballot. Instead, the sad and disappointing issues involved people on social media who don't know me and who either fear a collaborative approach and/or don't trust that I mean what I say. Since I committed to being accessible (I even published my phone number on all materials), I often engaged in social media threads on many topics. Early on, some contentious exchanges were reasonably within the mode of debating facts. However, as we got closer to election day, disingenuous spinning started to appear. One person, who certainly knows better, suggested I was funded by Chevron. Another individual insinuated that I was an operative for SunCal. Neither of these allegations could be further from the truth, but that didn't stop them from saying these things, presumably to steer votes away from me. Rather than mad, it just made me sad. In hindsight, however, I'm pleased with the relative lack of attacks. I hope that has something to do with the fact that I ran a positive campaign, did not talk about my opponents and kept my message about what I'm for rather than what I'm against. We don't yet know if that's a winning strategy, but it was the right thing to do.

As we wade into the eve of election day, I am most proud that I have kept my integrity intact and never made a promise I can't keep. I'm also extraordinarily grateful for the endless hours of effort spent by a small but dedicated group of volunteers, several of whom have been with me from the outset, and I'm so thankful for my campaign manager, who joined me for the last few months and went above and beyond the call of duty on a daily basis.

At this point, I feel like we've won. Regardless of the vote tally, we started off with a mission to bring collaborative leadership to Richmond. We have achieved an extraordinary amount of support for a bold new way of doing things that involves ensuring every voice matters. We will soon learn if I get the opportunity to see this through from the Mayor's Office. No matter what, collaborative leadership is coming to Richmond, and I'm not going anywhere.

On a final note, at the end of the day, this is about the future, and nothing could embody that more personally for me than my own children. Though I tried to keep them out of campaigning, they took an interest to all of this and I was deeply moved to hear my 6 year-old and 9 year-old talking fluently about “collaboration” and “getting people to the table.” Whether elected or not, the greatest success I could imagine from this campaign and/or my term in office will be that future leaders are inspired to collaboratively lead for the whole. May it be so.