Sitting down with Chief Magnus: A conversation on crime and community 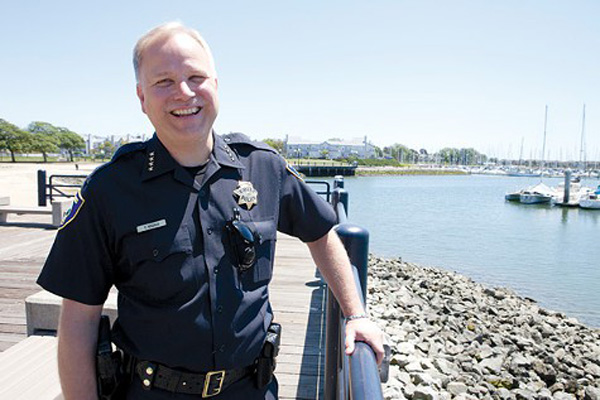 Crime in Richmond is down -- way down. In the first half of 2014, violent crime is has been reduced by 26%, and property crime is down 27%.  These figures come from a report released earlier this month by Chief of Police Chris Magnus. Chief Magnus, who has dedicated his lifework to community-based policing, credits the drastic reduction in crime to a focus on the community and new technologies, but warns that this trend could reverse in an instant.

"Even just one person coming back can have a huge unsettling presence in a community," Magnus explains. This is why, 35 years into a life in public safety, Magnus continues to work hard.

In many ways, Magnus' tenure in Richmond is a culmination of his lifetime in public safety. He started out in his hometown of Lansing, Michigan, a city he describes as very similar to Richmond. "They're both blue collar towns, but instead of having Chevron, we had General Motors," says Magnus. In Lansing, Magnus moved up the ranks and eventually took a job in Fargo, North Dakota as the Chief of police. With a population of about 115,000 at the time, Fargo was a larger city that what Magnus was used to, and its climate of cultural convergence --  new populations were arriving from Bosnia, Serbia and Sudan -- made getting to know the community a necessity. "It was in Fargo that I really had a chance to implement a lot of new community policing strategies. A lot had to be worked through with a huge international population entering what had been up until then a very homogenous culture."

That was fifteen years ago. Now, nine years into his career in Richmond, Chief Magnus reflects on why Richmond initially excited him: "My interest was captured around Richmond as an opportunity to try out some of the same strategies that I had been utilizing in Fargo and Lansing to see if they would work in a city where there were the additional challenges of violent crime and a lot of history involving the police and the community that wasn't necessarily positive. I made the decision to move to Richmond to try and working together with residents to make some changes."

Magnus describes his approach as diverse, never relying on one tactic too much, while still putting community in the forefront. "I think the biggest and most important part of our policing efforts involves relationship building between residents, community folks, and the police department," Magnus explains. "When you have folks working with you as a partner, not only can you get a lot more done, but when mistakes are made or an approach was put in place that you didn't necessarily work the way you wish it did, people are a little more forgiving and understanding of how that can happen."

The Ceasefire program is an example of this partnership. The idea behind Ceasefire is to work with the community to connect with the key individuals involved in the worst of the violence and give them a choice. "On the one hand," Magnus explains, "the community will do call-ins with these individuals, and we have people meet with them and convey the message that we care about them, and that people in the community are willing to help them get out of the gang life. Then there's another message delivered, and this is from Law Enforcement, the District Attorney, Federal officers, and Richmond police, and that message is that if you are not willing to take advantage of the services and programs, be aware that we are going to be really scrutinizing what you are doing, and you're going to be held to account to the crimes you are committing."

As Chief of Police, Magnus relies on this dialogue to be effective, while also utilizing an expansive technological tool belt. One of these tools is call Shot Spotter, a system of sensors around the community that triangulates gunfire and gives the police nearly realtime information about where that gunfire is coming from so they can respond quickly to those locations.

"I like to think of my approach as full-service policing," says Magnus. "If you look back to the history of policing, it has really been about the community. The community are the police, and the police are the community. My view is that officers should police the areas they are responsible for as if they live there. I think if we take that approach, people are much more willing to be supportive and engaged and make things better and wont see us as just an occupying force."

Magnus, as a resident of Richmond, really is the community. And he finds motivation in this. "What pushes me is the idea that we can keep improving Richmond's reputation, and get rid of the image that Richmond is just a dangerous scary place, which is so far from the truth. Richmond is not perfect, we have a lot of challenges, and we are going to be dealing with crime issues. But it doesn't have to be the kind of place people are scared of or have to feel awkward about saying they even live in Richmond. This is a great place and there are a lot of exciting things happening here, and we need to get the word out about that."

That said, Magnus realizes there are many challenges moving forward. "You can never sit back and say 'mission accomplished' in this line of work. We've made a lot of strides in reducing crime, specifically violent crime, but that's never a final job where you can sit back and relax. Richmond crime has gone back and forth in the past. We've had set backs, and things can change very quickly. I think the challenge is maintaining what we're doing, to continue to try new things, to continue to build support, and be relentless in fighting crime."