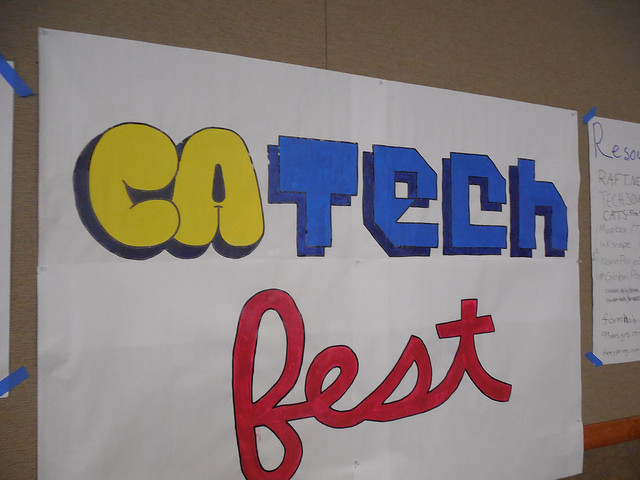 Nearly 70 nonprofits will come together this Thursday and Friday for California Nonprofit Tech Fest. Over the course of two days, nearly 100 representatives from the nonprofits will meet to talk about technological developments, social media strategies, and how to succeed in a digital landscape. This may sound like a typical tech gathering in San Francisco, but in fact this event is happening much closer to home -- right here in Richmond.

Also unusual for a tech event is the emphasis on social justice and a deliberate lack of reverence for the digital devices that are instrumental in the event. "We believe that technologies are not the most important things, but that the human relationships behind it and how people connect is what is going to build power for any type of movement," explains Misty Avila, Program Director for Aspiration, the nonprofit which organized the event.

Creating the space needed for such a technological kumbaya is a feat of logistics and innovative thinking about the relationships people hold with each other and with technologies. "The main scope of the project has been to build a network of people and nonprofits who can leverage technology for social justice, rather than in interests of profit-driven technologies," says Avila. "We do that by trying to bring together technology developers and nonprofit staff, funders, and community organizations in a space to share knowledge laterally."

There are a few reasons that Aspiration chose to sidestep the tech hub of San Francisco altogether in favor of Richmond. "With California Nonprofit Tech Fest, we are trying to build a center of gravity in places where there aren't as many resources for technological development and exploration," explains Javier Kordi, Aspiration's Communications Coordinator. According to Kordi, Richmond is the perfect place for a tech fest.

And so the city became the event's landing spot thanks in part to a natural inclination from Aspiration, but it was nailed down with the help of a local nonprofit. After hosting tech fests over the past two years in cities like Coachella, Fresno, and Los Angeles, Aspiration wasn't sure where to go next. They put out an open call over Twitter for suggestions on their next location, and Healthy Richmond, a local nonprofit, tweeted back.

Katherine Rife, Program Coordinator at Healthy Richmond, was the one who first made contact with Aspiration. Rife sees the tech fest as particularly beneficial to the local community. "It's been acknowledged that there is a big digital divide in Richmond," Rife explains, "and addressing that divide through events like the Nonprofit Tech Fest can help people overcome a disadvantage."

In addition, says Rife, Richmond's community has many parallels to Aspiration's tech fest. "The dynamic learning space that is created in the tech fest -- a collaborative, participatory, and inspiring one -- mirrors the spaces that our community partners are creating in Richmond every day," she says.

The entire festival is collaboratively run from top to bottom. Rather than having a set program of events over the two-day festival, the schedule is made in realtime among all attendees. Because these participants range in scope from nonprofit leaders, to tech developers, to online activists, there are many different knowledge pools brought to the table, and each individual is sharing and learning from one another. The idea is that the attendees will then return to their nonprofits and spread this information to their colleagues.

At the end of the event, Aspiration hopes that the participants will not only gain new skills to send out e-blasts, track growth, and become more proficient with web tools -- but the aim is also to establish and nurture a network among these nonprofits that will develop in years to come to better their community.

"In the Bay Area region, sometimes the tech culture is seen as something exclusive that creates socio-economic barriers. I think Richmond can help change that narrative and be a model of how a city can use technology as a tool to break down barriers, build collaboration and act as as a megaphone to amplify community voice," Rife explains. "By coming together, Richmond's nonprofits will be able to gather the tools they need to improve the community and address the digital divide," she says. For nonprofit leaders in Richmond, the first step towards achieving this goal is further collaboration.