Most traditional public schools built today are built to last 50 or more years (most charter schools are built to different standards.  They’re built as office buildings so if the charter school fails or needs to relocate, the buildings can be repurposed.  Traditional public schools must adhere to the Field Act which dictates specific building codes for schools.  [Enacted in 1933 after a major southern California earthquake rendered 237 schools unusable.]  Many charter schools only have to apply for permits through the local Planning Commission instead of the Division of the State Architect (DSA).

Schools built in earlier years were not designed to last as long as schools designed today.

Woodrow Wilson Elementary School (formerly located at 629 42nd Street in Richmond) was built in 1953 and, in recent years, was showing its age. If it was a human being, it would be eligible for Medicare.  If the parents of the students attending Wilson can be believed, the school absolutely needed to be replaced—NOW! 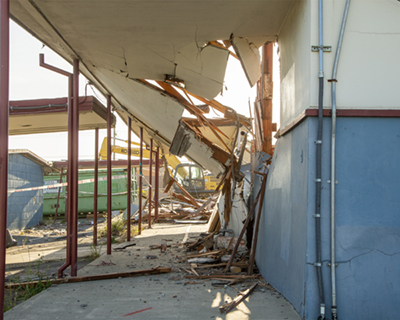 When the WCCUSD examined those schools that had not yet been repaired or replaced, the Facilities Master Plan determined that Wilson was at the top of the list to be replaced.

Even though the District had spent $4.8 million to have the new school designed, the Board determined that because they wanted to change the specifications, the plans that had already been approved were no longer viable. They determined that the plans in hand could not even be adjusted to meet the new standards.

So they tossed those plans and are in the process of starting over.  Instead of using the existing plans and using a master developer, they’ve embraced the design build concept [ https://en.wikipedia.org/wiki/Design–build ]--in this case using local contractor Overaa Construction.

One way to expedite the process and save millions of dollars, is to build the new school on the sports fields at the existing site and, when the new site is completed, simply move the students from the old to the new.  The old facility is then demolished and the sports fields are rebuilt.

The WCCUSD chose not to go that route.  Part of the problem was that Board member Mister Phillips was insistent that the old facility was not seismically sound and it would be negligent of the Board to allow the students to continue to further their education in those buildings.

NOTE: FURTHER INQUIRIES TO DISTRICT STAFF POINT OUT THAT THE PREVIOUSLY MADE STATEMENTS THAT THE BUSSING FEES TOOK MONEY FROM THE CLASSROOMS WAS INCORRECT. A CORRECTED PARAGRAPH FOLLOWS:

Even though it was estimated that it might cost as much as $800,000 per year to bus the students to the temporary campus (at the former Portola MS site on Moeser Lane in El Cerrito), the Board elected to take the money from the limited funds available to rebuild Wilson and Lake Elementary schools.  The funds necessary to bus the Wilson students for the 3-4 years it would take to build the new campus, will require that the last two schools in the Bond Program reduce the original scope of their design.

Arguments were made that a reasonable risk assessment should be made first. Considering that out of the 168 hours in a week, the students spend on average only 20-24 hours per week actually in the buildings.  The old buildings were single story individual buildings with only a slight risk of collapsing if ‘the Big One’ were to hit while the students were in those classrooms.

The 15 year old report that Mister Phillips used as his guide failed to point out that most buildings in West County were equally seismically unsafe because they were designed and built long before the current seismic standards.

With all projects that are rushed through, a risk analysis needs to be made to determine whether taking as much as $3 million out of the classrooms is warranted.

But that’s an argument for another day.  The relocation took effect last year.

The old facility met the excavator recently and is largely several very large piles of lumber that used to be classrooms.

The District expects that sometime this summer plans will be approved and construction on the new site can begin.

Luis Freese, the WCCUSD Engineering Officer, explained that they hope to begin construction as soon as the demolished buildings are cleared the expectation that students will be able to come home and renew their education at the new Wilson before the 2020 school year begins.