When Hilltop Mall opened in September of 1976, the 77 acre mall (with abundant parking) was anchored by JC Penney and Capwell’s at either end with Macy’s in the middle.  And then there were many dozens of smaller shops for West County residents (and more) to frequent as they kept their shopping dollars local. 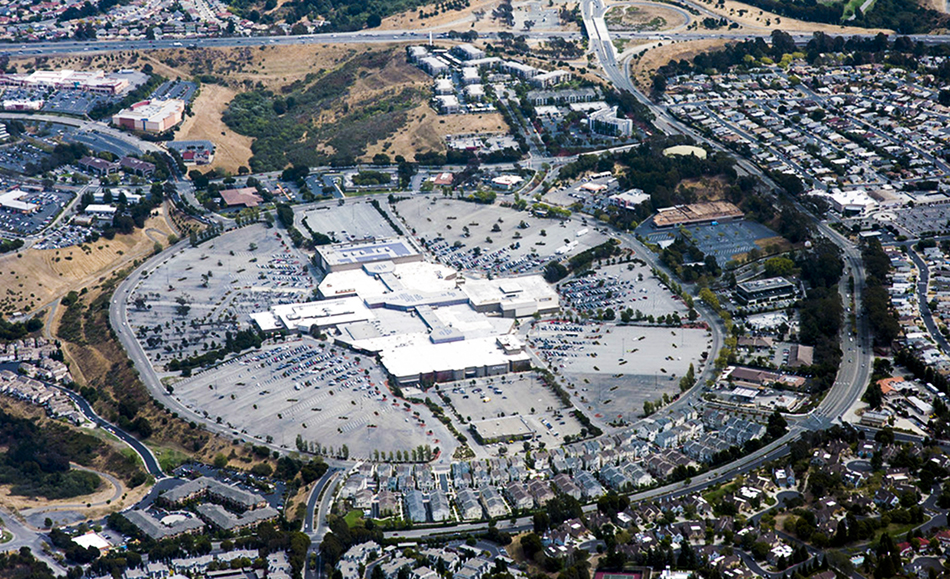 Many of the new stores relocated from downtown Richmond.

There was See’s Candy; B. Dalton, Bookseller; Things Remembered; two sets of multiscreen movie theaters; several food courts; grooming salons; a military recruiting station; lots of shoe and clothing stores and a host of stores that you might find at any other mall from the period.

There was a central gathering area with a two story brass sculpture and a long and winding spiral staircase to get from one floor to the other.

Hilltop Mall was a very popular gathering spot for young people that wanted to gather out of the rain or to take advantage of the air conditioning.

Long before the first shovel was turned, this was Standard Oil’s ‘Tank Farm Hill’—a vast stretch of land between Pinole and San Pablo that Standard Oil (later to be known as Chevron) used for their petroleum storage tanks.  The photo shown here shows one of the tanks that met a fiery end. 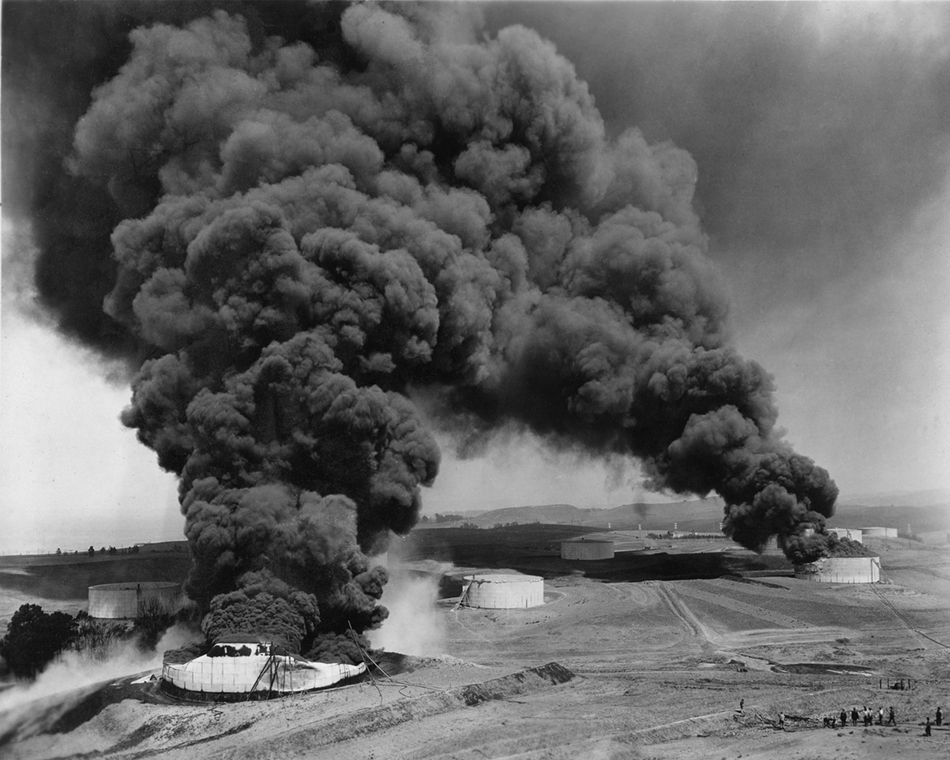 As so often happens, the world changed and indoor enclosed malls all across the nation became less popular while shoppers yearned for a return to large outdoor malls.  There are many schools of thought about what happened at Hilltop.  Perhaps it was coincidental that Richmond’s first police substation was at Hilltop Mall.

First the stores located across from the mall on Hilltop Mall Road departed—many headed across I-80 to the new mall on Fitzgerald Drive in Pinole.  Then the shops inside the mall relocated.

The mall filed for bankruptcy with at least five owners between 1998 and 2017 when it was rebranded as The Shops at Hilltop.  The new owner—LBG Real Estate Companies—had grand plans for a new mall with 16.7 million square feet of occupied building area that included retail, a hotel, entertainment, restaurants, office and 3400 residential units.

Alas, the plans ran afoul of the economy, the lack of community support and the devastation that accompanied the business shutdown as a result of the COVID 19 pandemic.

LBG into negotiations with Prologis—a real estate investment trust company—for the purchase of the site and a deal was consummated in late April with Prologis paying $117 million for the same property that LBG paid $23.75 million just four years earlier

According to their web site, Prologis is a $56 billion San Francisco based company that invests in logistics facilities with a focus on the consumption side of the global supply chain.  Prologis had revenue of $4.439 billion in 2020.  Their site also says that $2.2 TRILLION economic value of goods flows through their distribution centers each year.

Community groups have mobilized with some supporting the tax revenue and jobs that come with the development of the site and others vehemently objecting.

Several new community groups have been formed (such as “No on Prologis”) with many of them purporting to represent the many neighborhood councils in the area and the people residing in the greater Hilltop area.  Some of these groups are demanding that Prologis meet with them—even though Prologis is not yet the new owner.

There was pushback about any suggestion that Prologis might develop the site into another fulfillment center for the distribution of items purchased over the Internet (such as Amazon), the inclusion of low income housing (that might lower the property values of the Hilltop neighbors), or the use of nonunion construction workers and/or employees.

Many of the new groups have expressed the need for Prologis to provide a generous community benefits package providing the community with tens of millions of dollars worth of benefits specific to their community for the privilege of coming into Richmond with jobs and tax revenue.

At a recent community forum and presentation hosted by the Fairmede Hilltop Neighborhood Council and the Hilltop Community Church, Richmond City Councilmembers provided their insight on community benefit packages.

Whatever happens at the old Hilltop Mall, Councilmembers Nat Bates, Eduardo Martinez and Vice Mayor Demnlus Johnson—who all attended the forum—were asked “Whatever happens at Hilltop, is this being developed in the Hilltop community or is it being developed in Richmond? That is, when the City and Prologis have community meetings, will these meetings be geared for the people in the Hilltop neighborhood or will the rest of Richmond be invited to weigh in?” 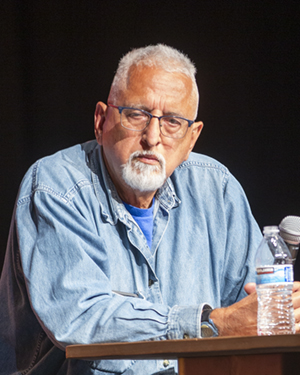 Councilmember Eduardo Martinez wrote “The Hilltop development will be both in Richmond and more closely in the Hilltop community. The better question would be: who will use the Hilltop development?  An even better question would be: how will the development affect the continued growth of Richmond? It is time for Richmond to set standards of what our city needs from developers so that they know what is expected of them before they decide to build here.  Our city plan was created by all of Richmond with everyone having a chance to voice their ideas of what Richmond should look like. That tradition should continue, but we should be more exacting in what we are envisioning and we should see it through. Let’s dream big and polish the gem that we are.” 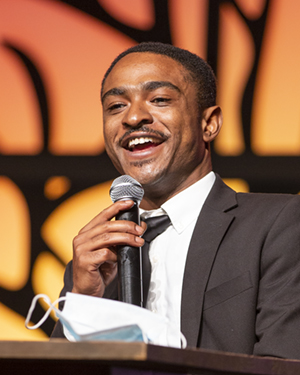 Vice Mayor Demnlus Johnson weighed in with “Ideally community meetings should be geared towards the Hilltop community with an open invitation to the rest of Richmond residents. Seeing as though the City's Specific Plan directly impacts the residents of Hilltop their input should be prioritized. However, seeing as though Hilltop is in Richmond and serves as a destination for all of Richmond- non Hilltop residents' voices should not be excluded.” 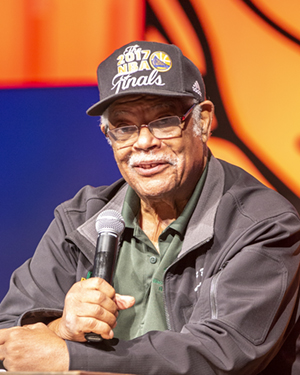 Long time Councilmember Bates—who was instrumental in getting the Hilltop Mall built in Richmond—replied with “My response to community involvement today is as what I fought for in the 70’s, total inclusive participation.  Because the Hilltop Center, I always referred to as Hilltop Mall, it’s original name, is located in the Hilltop area, does not in my opinion become territorial. Shoppers patronizing the Hilltop Mall comes from throughout the city and should they desire to participate, they should be welcomed. From my perspective this is definitely a “City of Richmond Project”.

Richmond’s Community Development Director, Lina Velasco, explained it best when she explained “The Hilltop Change Area, as envisioned by the General Plan, will be one of three major urban centers in the City; therefore, it will be important to not only gather the input of the area and surrounding residents, businesses, and owners, but also the Richmond community at large.  This broad input will ensure Hilltop can serve a range of community needs and goals,  including housing, jobs, and economic development.  As part of the Specific Plan development process, the City intends to provide a range of community input activities that will be geared for a broad Richmond audience; however, staff also intends to provide project updates, promote events, and gather input using established networks, such as neighborhood councils.” 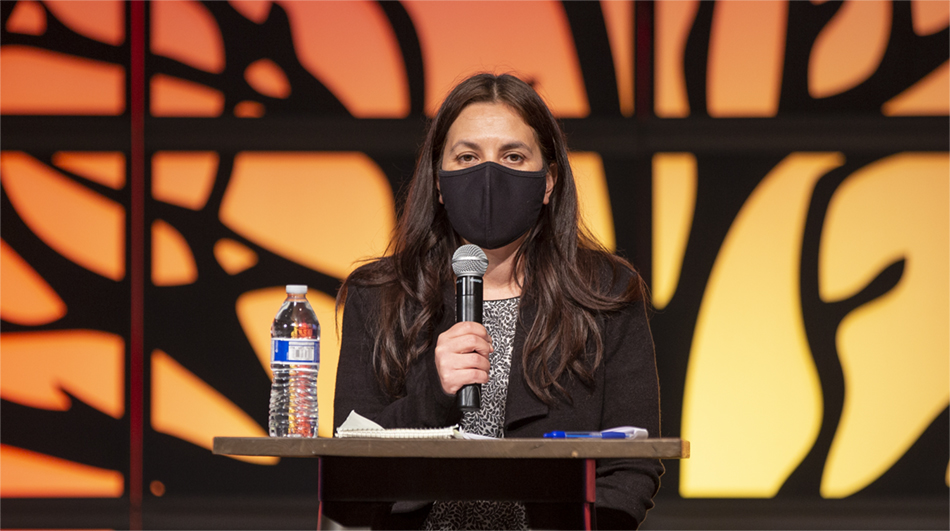 Listen and watch the presentation by Ms. Velasco and comments from Bates, Martinez and Johnson at:

On Thursday June 3rd at 6 PM, Prologis will make a presentation at the Fairmede Hilltop Neighborhood Council meeting where the public can learn more about their plans.  The meeting can be viewed live on several Facebook sites: 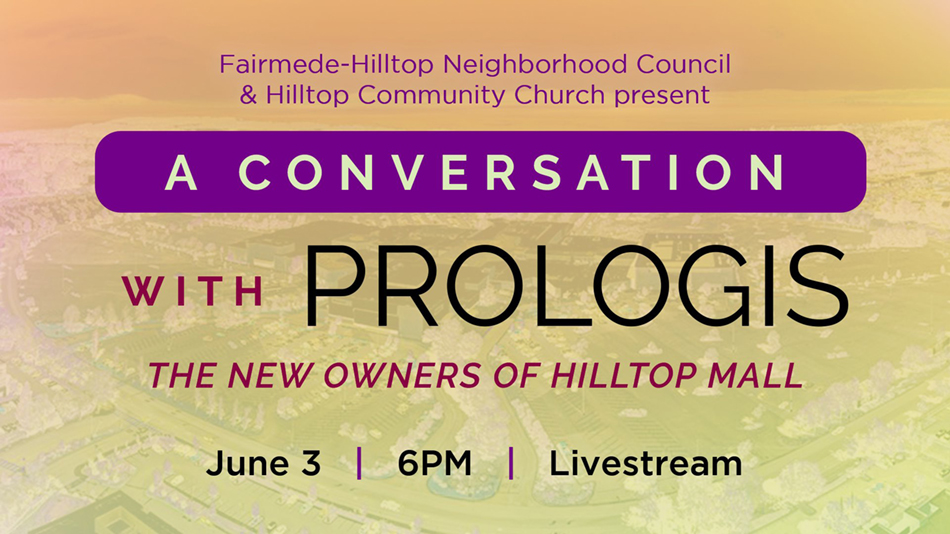