The RHA strives for reform, but disagreements block progress 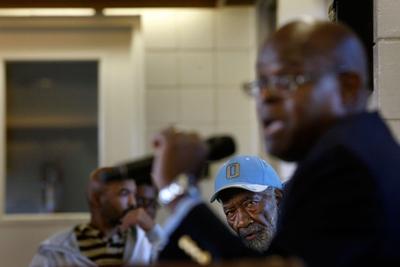 Both the Richmond Housing Authority and City Council fought last night to fix the troubled housing agency. Each party wants to improve the organization, starting with nailing down the logistics of day-to-day operations. But opposing visions of how the RHA should operate blocked the full potential of progress.

The three agenda items focused on contracts to hire a temp agency, a locksmith, and a pest control service. With these measures, the RHA attempted to address issues that will keep the agency running in the future. But the discussions around the items brought up larger implications on the relationship between the RHA, its employees, and its tenants.

The second item on the agenda was the pinnacle of this debate. The contract in question offered $50,000 a year for a locksmith company for the period of three years. It was agreed that the RHA needs lock maintenance, but disagreement over the level of involvement of the resident managers and staff within the RHA in this process broke down civility in the Chamber.

This sum of money seemed excessive to Commissioner Thompson, especially when she stated that the work could be completed in-house. According to Thompson, the RHA recently hired three new resident managers and they were all trained to handle such emergencies. If the RHA invested in a key cutting machine, she believed that residents could have their problems responded to on a local level and the Housing Authority would save money in the process.

RHA Executive Director Tim Jones didn't think that these resident managers could handle the volume of requests they receive on a monthly basis, and the two went back and forth on the matter. At hand was the issue of how to allocate resources and with whom to trust the RHA's money. Jones thought that outside contractors should handle such matters and Thompson thought that a local plan would allow for faster response times and greater accountability.

Council Member Tom Butt interrupted the debate. "I'm a little concerned that this City Council is bound and determined to micromanage the operations of the Housing Authority," Butt said. "I think there's a better way to do this." In his comments, Butt called for the City Council to take a hands-off approach to the RHA, a view that seemed to be shared by Mayor Gayle McLaughlin, Vice Mayor Jovanka Beckles, and Councilmember Jim Rogers.

In contrast, Council Members Nat Bates and Corky Boozé echoed Thompson's concerns. Eventually Boozé made a motion to move this item until the next meeting, so they could further explore the item. This was supported by Bates and Thompson, but did not get the Council votes needed to be approved. After that, the original items was passed with the approval of everyone but Bates, Boozé, and Thompson.

Amid last night's debate, genuine signs of improvement in the RHA were apparent. Yolanda Pearl, an RHA resident who spent the last five months living in an Extended Stay hotel, sent a report to the Council that the RHA had moved her family into a new, permanent home in Nystrom. City Manager Bill Lindsay mentioned that the audit of the RHA is underway and should be available in late December. However small, these are clear markers for improvement.

In the meantime, though, as the RHA becomes a fully functioning body again, continuing the argument at this meeting will be crucial in defining the relationship of the RHA to its contractors, residents, and City Council. It is clear from the various council members' responses that some feel comfortable letting the RHA handle its own affairs, while other voices on the Council don't yet trust the agency that was so poorly run for so long. Over the coming weeks and months, it will be up to City Council to determine whether the RHA can be trusted to regulate and operate on its own, or if City Council will continue to hold the Authority's hand until it has proven itself capable of autonomy.