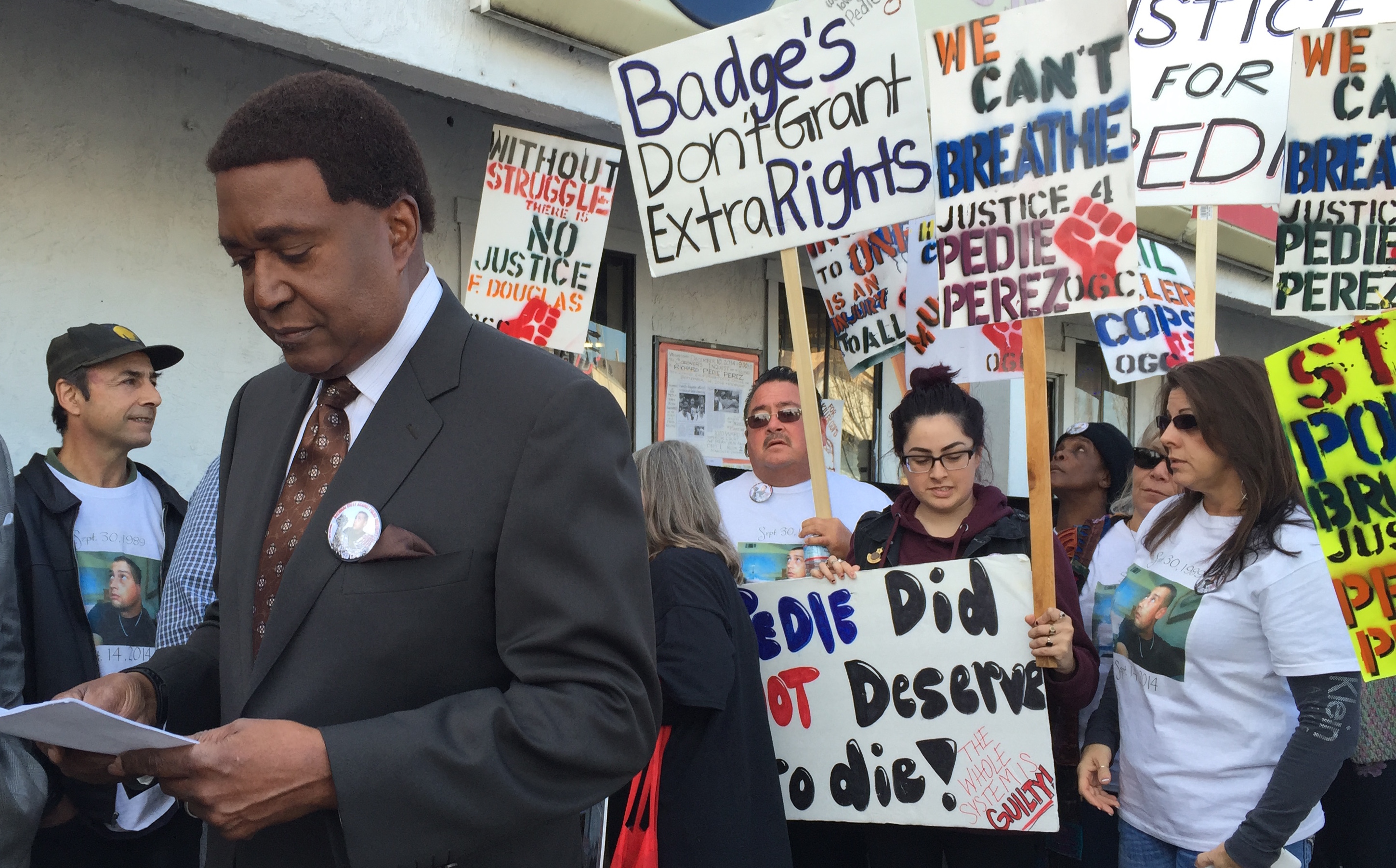 One year after an officer of the Richmond Police Department shot and killed an unarmed Richard “Pedie” Perez in front of Uncle Sam’s Liquors, questions are being raised by members of the Perez family and the Richmond Police Commission about when and why investigations into officer-involved shootings are — or are not — investigated, and who has the authority to make such decisions.

On September 14, 2014, Perez, intoxicated with a blood alcohol level of .274, according to toxicology reports, stumbled into Uncle Sam’s Liquors. The Cutting Boulevard corner store was one Perez had been going to since he was a kid. He was troublesome and was told by the clerk to leave, according to the Richmond Police Department Report. A Richmond Police Department officer happened to be passing by on patrol and came across the confrontation. In a matter of minutes Perez, unarmed, was shot dead by the officer. It was the first officer-involved fatal shooting in Richmond in seven years.

What happened in the minutes leading up to Perez’s death —whether the officer who fired the shots was acting in self-defense or guilty of using excessive force —has been the focus of a heated debate in Richmond for the past year.  Perez’s family have argued criminal charges should be filed against the officer involved in the shooting, but the Contra Costa District Attorney ruled the shooting was justified. An internal police department investigation reached the same conclusion. Still, Perez’s family have requested an investigation.

“We don’t think all officers are bad, but we’ve done our own investigation and looked at all the evidence, and we think the officer had no reason to shoot our son that night,” Pedie’s father, Rick Perez, says. “The officer had other options, and we want an indictment.”

Their latest hope came from the Richmond Police Commission, a civilian oversight board that investigates racial and use-of-force incidents. However, the bereaved family’s hope for an independent investigation to determine whether or not excessive force was used in the death of their son is now in limbo - caught up in a bureaucratic blockade, which exposed unclear boundaries between the Police Commission and the City Attorney.

Formed in the mid-1980’s as response to the actions of a group of corrupt RPD officers known as the “Richmond Cowboys,”the Richmond Police Commission was charged with holding the police accountable in incidents involving police violence.

“The community wanted police accountability and oversight,” explains Don Casimere, one of the founding members of the Richmond Police Commission. “The Commission was formed to have an independent body to review police practices and give the public a voice in this, especially in cases of police violence.”

The nine-person commission is appointed by the Mayor to “review and evaluate the policies, practices and procedures” of the Richmond Police Department, and to “promote positive police-community relations.” The Commission is staffed by a confidential investigator and an appeals officer (CIAO), who are appointed by the City Council to conduct investigations through interviews and uncovering evidence.

“The CIAO is responsible for much of the staff work for the Police Commission,” Casimere explains. “The authority on whether to pursue an investigation lies with the Commission itself, and it’s up to the CIAO to do the leg work.”

“When your son is shot and you’re grieving over that, your mind is only on one thing,” says Rick Perez. “Beyond getting a lawyer, the thought doesn’t cross your mind to look for this commission.”

The Commission’s CIAO, Terry Simpson, resigned in August and chose not to comment on his actions while in the position. What is clear, however, is that during Simpson’s final months as investigator he collaborated on the Perez case with Richmond City Attorney Bruce Goodmiller.

It was Goodmiller who responded to the Perez family’s complaint to the Police Commission. In June, the City Attorney stated in a letter to the family, “I am writing in response to your recent Citizens' Complaint filed with the Richmond Police Commission concerning the fatal Officer Involved Shooting on September 14, 2014. Richmond Municipal Code Section 3.54.080(b)(3) provides that no complaint may be accepted, investigated or heard if it is not filed within forty-five (45) days of the incident.”

To Scott Gillespie, Chair of the Richmond Police Commission, the City Attorney was out of bounds in writing this response, which should have been the CIAO’s responsibility.

There is, however, a saving grace for late complainants like the Perez family. The 45-day rule can be waived if “the complainant establishes to the Investigative Officer's satisfaction that the failure to file the complaint within the required time limit was due to mistake or excusable neglect.”

In his denial, the City Attorney made no reference to this exemption nor shared any reasons why the Perez family’s failure to know about the Commission did not qualify them for it. Instead he applied the 45-day rule without waivers and stated that previous investigations into the case were sufficient. “Additionally, this matter is the subject of active litigation by attorney John Burris. Even if these complaints were timely, and they are not, I am doubtful that a third investigation, in addition to Mr. Burris's efforts, would add any value,” the City Attorney said in his June 3 letter.

To the founding member of the Commission, this is about more than following a technicality. “Somebody is dead,” Casimere says. “Why not why not have an investigation? Why tell a citizen no, we're not going to investigate this, because you didn't turn a complaint in on time?”

“Sometimes it's better to honor the spirit of a thing, the spirit of the ordinance, and do the investigation,”Casimere says. “If you are a few days late, or a few weeks late, or even months late, if they have a good reason, if they didn't know about the Commission, they should err on the side of investigating the complaint.”

Without a CIAO, the Perez complaint will go uninvestigated. It’s up to the Richmond City Council to hire a new one and determine the future direction of the Richmond Police Commission.

“Now it’s a question of what the City Council wants to do with the Commission,” says Casimere. "If they feel no value in this Police Commission, then it should be disbanded and shut down. If they feel there is some value in it, then they need to find a budget for this office and provide adequate staffing to support it to do its job.”