WCCUSD BOARD OF EDUCATION MEETINGS ARE NOW IN-PERSON

On August 25th, after 527 days without an in-person meeting of the Board of Education, a hybrid meeting was hosted where the Board met in person, members of the community could attend in person or attend virtually via Zoom.

The in-person meeting was limited to no more than 100 persons plus as many as 19 staff members.

Community members who wanted to attend in person were required to apply in advance using an online form.  Once approved, they were met at the front entrance by two security personnel who first checked that they were on their list, made sure to see their proof of vaccination or a negative COVID-19 test no older than 72 hours old, required the entrants to fill out a form validating that they did not have any of the symptoms and agree that once they entered, they would not be allowed to leave and reenter (no forgetting something on the car, no stepping outside to take a phone call or grabbing a smoke). 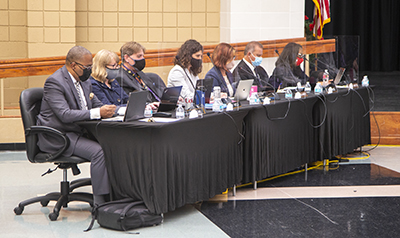 The Board members and staff were separated by plexiglass partitions with staff seated on the floor and the Board on stage.

Trustee Jamela Smith-Folds was conspicuous by her in-person absence.  She participated via Zoom.  She wrote on her Facebook page “Some of you may know, I have underlying health conditions that make me high risk. I believe attending in person is an unnecessary exposure that impacts more than just me.”

As we might expect after a year and a half absence, there were technical issues that made the process difficult.  In the room, staff members and Zoom speakers could be heard but when those at the dais spoke, it was difficult to understand them.  The audio was muffled (not just because of masks).  Some Board members also complained about not being able to hear public speakers and some Zoom speakers.

As it turned out, even though the room was set up for 100, there were no more than 14 persons sitting in the audience with six that arrived as a group, spoke as a group and departed early as a group.  There was also a group of 2-3 that were wearing WCCUSD employee badges.

It was suggested to the Board that in light of the poor in-person attendance and the cost of hosting such a meeting, that the Board ought to consider going back to virtual meetings and revisiting in-person meetings in maybe three months.

Trustee Leslie Reckler pointed out that Governor Newsom’s Executive Order N-08-21 requires public agencies to transition back to in-person meetings by October 1 of this year.  As we’ve seen with so much surrounding this pandemic, the rules change frequently so this mandated date may be extended.