WILL THE PEOPLE SUPPORT ANOTHER SCHOOL DISTRICT TAX? 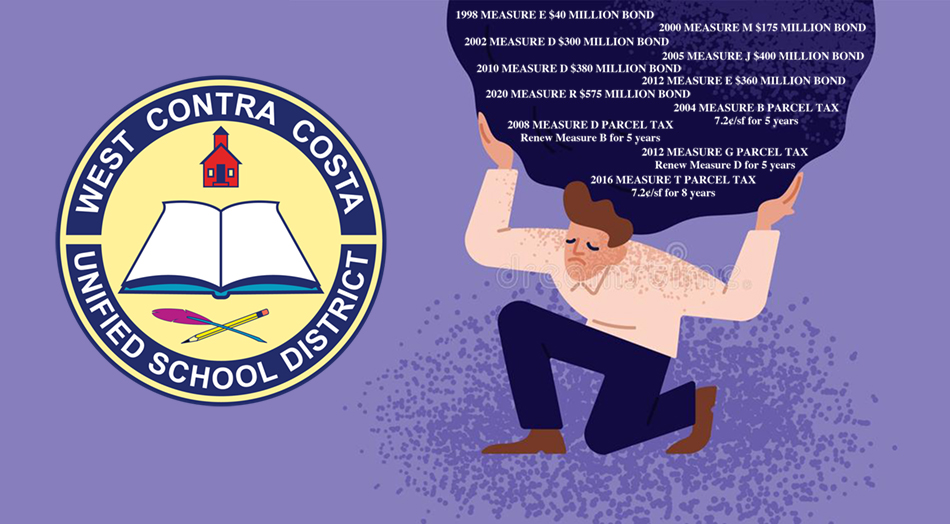 Up and down California school districts are struggling to avoid bankruptcy court.  Even before the Covid crisis, funding for public schools by both the state and the federal governments has been severely diminished and with the national economy in a full recession, no one should expect funding to increase unless local communities take action to increase the funding through parcel taxes.

In the past, the State has provided some cities and school districts with bail-out funds but with the state looking for a bailout and with hundreds of districts needing help, securing this help may be a false hope

The WCCUSD is no different than any of the other California school districts in that with the state and federal funding disappearing, belts are tightening, mass layoffs are in the works and every effort to stave off bankruptcy is little more than kicking the can down the road.  The WCCUSD Associate Superintendent of Business Affairs has been working full time to keep the doors open but many of the stopgap measures being proposed and implemented are merely shifting liability from this year to future years

Social media posts and comments leading up to the March 3rd vote on the District’s $575 million Measure R campaign OVERWHELMINGLY showed that a great many members of the public feel that they’re just being taxed to death.  Everyone is coming after them all at once and what little they’re earning is quickly disappearing.  And now that these taxes are no longer tax deductible, the pain is even worse

On Wednesday the 29th of July, the WCCUSD Board of Education will discuss whether the District should place another parcel tax on the November ballot.  This item is F.2 on the Board’s agenda.  The meeting is scheduled to begin at 6:30 PM but the start is frequently delayed if the Closed Session discussions frag on.  [See below for information about participating in this meeting.]

This will be a tax of 7.2¢ per sf of building area. For a standard 1,000 sf home in West County, this will be and additional $72/yr (that’s 20¢ per day). The tax is proposed to last 11 years and there are the usual senior and low income exemptions.  Unlike a bond measure, which only requires a 55% majority for passage, a parcel tax requires a 2/3 majority.  For good reason, that’s a difficult threshold to overcome

As with most serious expenditures, need has nothing to do with the ability to come up with the funds.  The District may need the funds to pay their teachers and staff a living wage with benefits; the community needs school counselors, libraries, arts programs and sports; the community needs to invest in programs to provide diversity on the District’s campuses.  While people may agree in these needs, do they believe in them enough to tax themselves again

Over the past 22 years, the voters in West County have dug deep to approve numerous bonds (for the facilities) and parcel taxes (to operate the District:

Any new tax measure becomes controversial and this one will surely stoke the embers of discontent.

There are as many as 13 candidates for the 5 school board seats that will be on November’s ballot.  Many voters will want to know where they stand on this issue so Radio Free Richmond has reached out to all of the known candidates for a quote.

ESTELA DEPAZ ~ West County residents have provided generous support for our schools. There are eight school district related assessments on my property tax bill. These WCCUSD assessments summed are roughly 30% of the countywide tax.

However, we are living in extraordinary times. With the current county unemployment rate at 13.4%, the end of the $600-a-week unemployment benefit, the unknowns about COVID-19, and stock market volatility it will be hard for members of our community to support a parcel tax. I believe a more responsible position is for the Board to begin the critical work of balancing the school district’s budget.

JAMELA SMITH FOLDS ~ I am hesitant to take a position on such an important issue without first talking with the residents of Area 1. Personally, however, I do not want to pay more taxes without full transparency and strict accountability from the school district. I feel that has been lacking.

OTHEREE CHRISTIAN ~ I think the parcel tax is unwise due to the COVID-19 crisis. A lot of people have lost their jobs. They are trying to figure out how to survive. Raising their taxes will only push them out of their homes and out of this area. We should revisit this when times are better.

GUADALUPE ENLLANA ~ I do not agree with the new parcel tax being added to the ballot. Residential taxes are already high in our communities and most people struggle just to make ends meet. I would want to see a full financial audit for the district. Reevaluate the Educational goals and how we will be investing to get there. Asking for more money won’t fix things until the money being asked for is being utilized in a way that can show the educational progress in the children we are educating. So I cannot support another parcel tax at this time.

AUDRA “GOLDDIE” WILLIAMS ~ Our district is in a state of emergency, so I think moving forward it will be important to consider every opportunity that will support our children. Getting state and federal funding will be a challenge. As an advocate for kids I would support the parcel tax to make sure the voters get the opportunity to decide.

MISTER PHILLIPS ~ Although I have campaigned for parcel taxes in the past, I cannot in good conscience support this parcel tax. It is wrong to raise taxes on working people during a global recession with record unemployment. We need to consider other ways to increase our revenues like leasing our vacant properties to real estate developers to build affordable housing for our community.

DEMETRIO GONZALEZ HOY ~ As a classroom teacher, labor leader and chair of our last Parcel tax and Bond measures, I have always supported any new initiatives that increase funding for education in WCCUSD. Our students deserve the resources and tools needed to succeed and I know how starved our schools are. Unfortunately, our community feels overtaxed and is currently distrustful of our school district. If our current Board approves the resolution this Wednesday I will most likely support the Parcel tax, but I need to hear more of what our community thinks and I also plan to concentrate my time in passing Prop 15 (Schools and Communities First) and rebuilding trust in our community as I advocate for more budget transparency and oversight.

Y’ANAD BURRELL ~ Parcel Taxes aren’t free money and taxpayers shouldn’t be used as ATMs for WCCUSD, being held responsible to, once again, rescue trustees and administration for its systemic mismanagement of millions in past parcel tax/bond measures funds to which WCCUSD has been entrusted. It’s a never-ending ‘shortfall’/‘building fund’ plea by this District whose history shows it falling woefully short of being fiscally responsible despite its stated intentions (i.e. audited 2017-18 financials show $17M general fund deficit, unaudited 2018-19 financials add $14M deficit, plus an expected $39M shortfall for current 2019-20).

KELLY RECK ~ In regard to the parcel tax, the taxpayers in our district have been very generous to our school district. They just approved a half billion dollar bond in March 2020.

We owe a responsibility to hear from the taxpayers before we push for another tax. So, I will need to talk with district 4 residents before I decide on supporting any new taxes during this time of national health crisis.

TOM PANAS ~ I’m in the process of polling my constituents to learn more about how they’d like me to vote.

LESLIE RECKLER ~ As of this writing, we are looking at cuts that will take us back to Great Recession levels. Back then, Kindergarten was three-hours long. Arts instruction was extremely limited. Teacher compensation was not remotely competitive with the region.

We can’t solve California’s school funding woes ourselves. Advocacy around increasing state, federal, ballot propositions - as well as using our own assets to generate revenue - must be employed. But our own funding measure will help a bit and will not disappear based on the state’s whim. It will likely save jobs and programs.

Time and again this community has risen to support the needs of its children. If we aren’t in it, we can’t win it. I say we make our case and let the community decide.

CAROLYN WYSINGER ~ The community has clearly stated that they do not want the district to continue bringing parcel taxes before them to fix their gaping fiscal wounds. It is a shame that as a district they haven’t made any moves to find other avenues or income or ways that leverage partnerships so they may collectively or individually address the items on their list. How can the community vote affirmatively on additional taxes when there are items responsible for the current deficit that the district admits were a result of miscalculations?

To participate in this virtual meeting:

By computer, please click the link below to join the webinar:

(More details are delineated at the top of the agenda packet.)