Yolanda Pearl: a forgotten resident of the Richmond Housing Authority 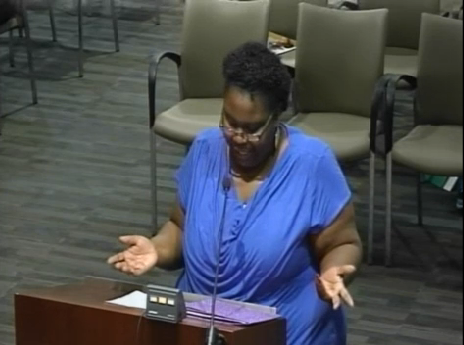 Yolanda Pearl has been fighting an uphill battle against the Richmond Housing Authority for nearly a year. There is mold in the bathroom, ceiling, and kitchen of the Nystrom Village apartment that she shares with her two young daughters, and she wants it out. It looked like that was going to happen, too, until the conditions of another housing complex, the Hacienda, were thrust before City Council in February. While the RHA scrambles to fix Hacienda, and problems affecting residents in other RHA buildings are being regularly forgotten or ignored.

Pearl saw this happen: She would drive by her unit every day to check on the progress being made, and eventually the work just stopped while her unit sat there, empty and mid-repair. "Right around the time the residents of Hacienda showed up at City Council and everyone realized what was happening there, the work on my unit stopped," Pearl explains. One week there were contractors bustling about her unit, and the next they were gone.

Pearl’s difficulties paint the RHA as a public agency whose focus is determined by the news o the day, to the detriment of residents whose plight has not had the benefit of that attention, at least not yet. To Pearl, it appeared that everyone who had been working to remove the mold from her unit was suddenly diverted to Hacienda. "I just stopped getting answers," Pearl explains. When she stopped by Nystrom to talk with the resident managers, she would get conflicting responses about what was happening. Pearl gathered that nothing was happening with her unit and no one could tell her when that would change.

Since the renovation of her apartment began, Pearl and her daughters have been moved at the whim of the RHA between another RHA unit and a hotel room. They are currently living in an Extended Stay hotel. Their space is small, just one room without a kitchen. The entire family is crammed into a small studio with no kitchen and little privacy. With the just 24-hours' notice they got to move, they didn't pack much to make the hotel room feel like a home. They didn't think they would have to. In the months following their move, the Pearl family has been told, more or less, to deal with what they have.

While Pearl has been given money for food, staying at the hotel hasn't been easy. "Living here has really compounded our problems," Pearl explains. Not only is her current living situation difficult on her and her kids' daily routines, being away from Nystrom makes it harder to stay in touch with her building manager. Without regular communication, Pearl has no way to make sure that the problems in her unit are being addressed.

After months of pushing resident managers in Nystrom Village about her untended unit, Pearl was eventually told that it was up to the City Council to determine when her apartment would have the funds for the renovation. And so last Tuesday at the special meeting between the RHA and City Council which was focused solely on the issues surrounding Hacienda, Pearl stood up to ask when she would be moved back into her unit.

Pearl’s comments were met with confusion. It seemed that none of the council members were aware that Nystrom had problems too, and they certainly didn't have the authority to approve the renovation of her unit. In the middle of the outrage over Hacienda, members of City Council had forgotten that the Richmond’s other public housing buildings are also in a state of disrepair.

As Pearl stood at the podium, asking what was happening with her unit and when she would be able to move back into the home, RHA Executive Director Tim Jones fired off one quick answer after another. Her apartment is nearly finished, he answered, and he assured City Council that he knew every detail of her case.

"I knew Tim Jones was lying during that meeting," Pearl explains. "What I see over and over is that people working in the Richmond Housing Authority don't respond to their residents' messages or concerns because there is a big lack of respect towards the tenants," says Pearl. "They just say whatever they need to push off the problem to another day." In addition to the exclusive focus on the Hacienda complex, Pearl sees this lack of respect as another reason that her problems have been ignored for so long.

After five months of limbo in a cramped hotel room, Pearl feels that her issues have become out of sight, out of mind for those in the RHA. Like the residents of Hacienda, Pearl doesn't know when her home will be in habitable condition again. Jones couldn't answer that question last week, but he promised that Pearl and her daughters would be able to stay in the hotel until their apartment is fixed. For now, they remain in the Extended Stay, waiting for answers.

Pearl's story is a reminder that the now-notorious conditions of Hacienda exist throughout Richmond’s public housing. With a lack of resources, attention, and care, many find that their problems remain unattended. In the coming weeks, in order to open a conversation on the experiences of Richmond Housing Authority tenants, Radio Free Richmond will continue to chronicle Yolanda Pearl's story in the hope that these abuses are not only acknowledged, but acted upon with tangible results.