Last Saturday a crowd of over 600 filled the bleachers and floor of the Craneway Pavilion to watch the Bay Area Derby (BAD) Girls, our local league, skate and cram their way to victory. As electronica and pop-punk blared through the speakers, the audience, fueled by food truck donuts and oversized novelty licorice, cheered on their favorite teams in the first double-header of the season.

At first glance, roller derby appears to be a game that is essentially Red Rover on wheels, and that isn't too far from the truth. As one team makes a chain on the track, the other bunches up behind them and upon the blow of the whistle begins cramming and shoving their way into the other team with the hope that one of them will break through, do a lap around the rink and score points for their team. Though simple in concept, roller derby is a game of finesse, brute force and myriad stylized skating moves. 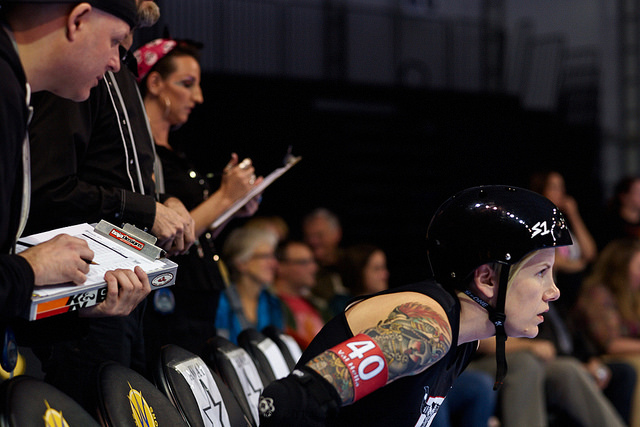 The first game was the Richmond Wrecking Belles versus the Berkeley Resistance. These teams from neighboring towns were neck and neck for the entire game. Trying to cram through the line to score, this first game appeared to be a constant tangle of limbs, clashing in grunts and yells, striving for victory. In the end, Berkeley came out on top: 149 to 141. The hometown favorite put up a good fight but didn't quite make it to victory.

After the teams high fived each other in solidarity, members of the audience poured onto the track and lined up to do the same. Though the Wrecking Belles had just suffered a close loss, it was clear the team was glad to be there. After the teams cleared the ring, the Church of Eight Wheels, an institution of roller skating based in San Francisco, provided an amusing if slightly puzzling halftime show of choreographed skate-dancing, acrobatic movement and denim hot pants which pumped up the audience for game two.

The energy was palpable as the San Francisco ShEvil Dead entered the ring, but it was nothing compared to the raucous howling that erupted from the audience when the Oakland Outlaws appeared. It was clear the Outlaws were the audience darlings. And as soon as the game began, the reason for this favoritism became clear: the Outlaws scored five points in the first two minutes and kept up the pace throughout the game. By halftime, the score was 178-34 Oakland. When all was said and done, the Oakland Outlaws clobbered the ShEvil Dead, 317-77.

Beyond the skating and cramming through for points, the BAD Girls double header offered many memorable takeaways. Here are the highlights: 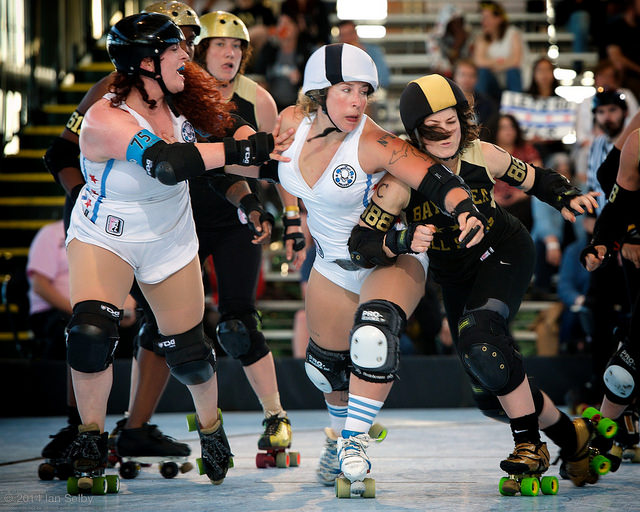 VIP: Oakland Outlaws player #013, Thrasher, for starting off the game by scoring 5 points in a row and establishing an early lead.

Food: Nutella-filled donuts from a food truck outside; meter-long, multi-flavored licorice available inside

The Bay Area Derby Girls' third game of the season, and their first double header, offered moments of courage, pity and surprising compassion. The league's fourth and final game of the season is on August 23rd.