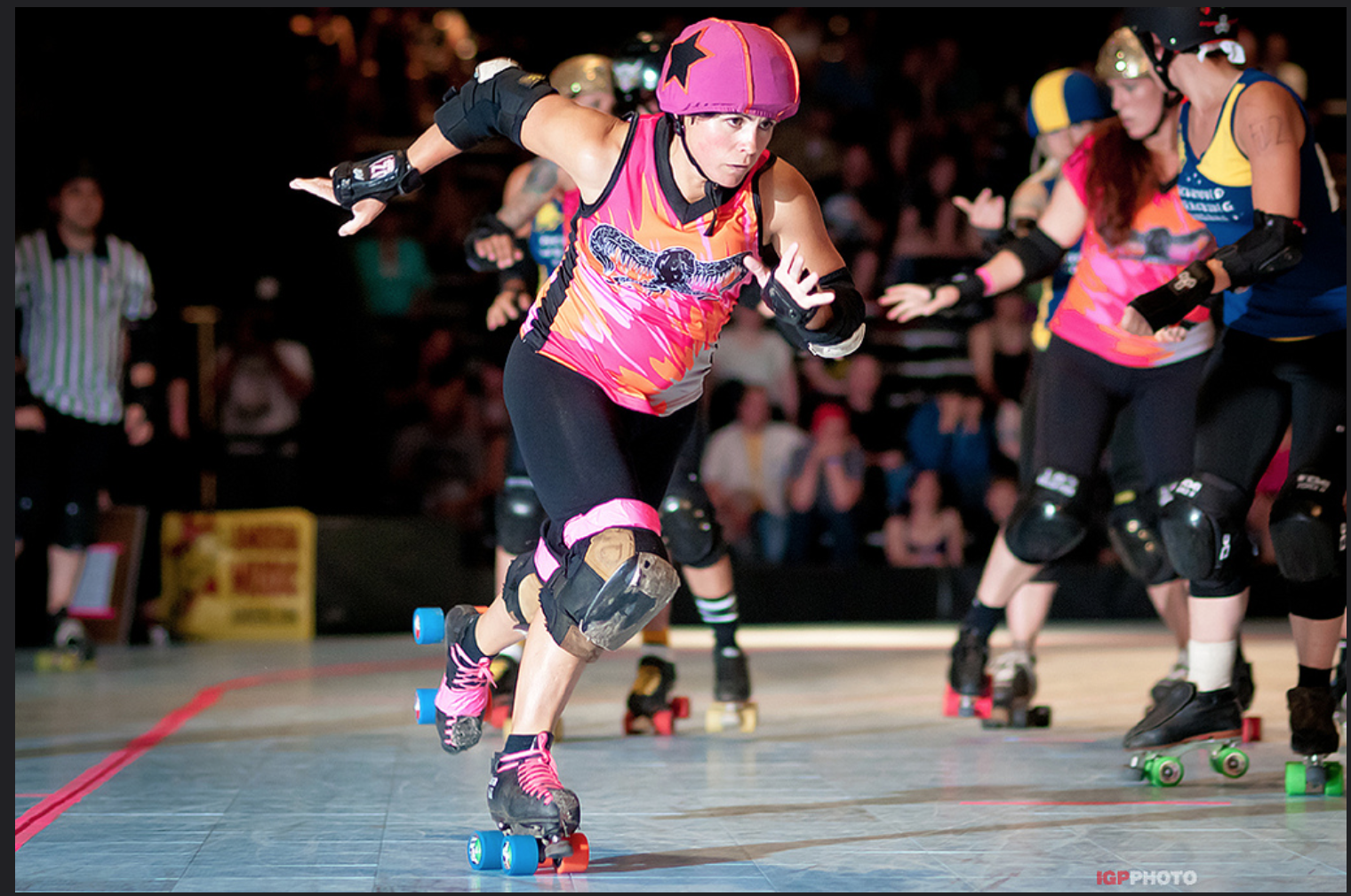 The Berkeley Resistance skated, jammed, and — at times — soared their way to victory over the Richmond Wrecking Belles in the second doubleheader game of the Bay Area Derby Girls season on Saturday, ending the game with a score of 189-102.

Impenetrable defense from the Berkeley Resistance and a fractured approach from the Richmond Wrecking Belles spelled doom for the hometown favorite as the two duked it out in the Craneway Pavilion.

For readers new to the somewhat complicated and jargon-filled rules of roller derby, here’s a brief explainer:

Bout: One game of roller derby, made of two 30-minute halves. Saturday’s season opener was a doubleheader, since there were two bouts: San Francisco ShEvil Dead versus Oakland Outlaws; Richmond Wrecking Belles versus Berkeley Resistance.

The Berkeley Resistance, outfitted in delicate pink uniforms that belied their vigor, stomped into the ring with chants of “Viva! Viva! Viva!” They stood together densely upon taking their places in the ring.

The blue and gold clad Richmond Wrecking Belles entered the ring in a sweeping slow dance, but they appeared slightly less coordinated than their Berkeley counterparts. They took their position behind the Resistance and waited.

Players braced themselves for the fight; helmets on, elbow and kneepads firmly secured, the whistle blew, and the game was on.

The game began with fitful and aggressive pushes from both teams. Players clashed and struggled to push back against each other. Each team’s jammer worked to break through the other skaters as they trudged around the ring. So close was the fighting and clashing that many of the skaters collapsed onto the floor in a tangle of skates and grunts.

Amid the chaos it was unclear who was gaining ground. However, Berkeley’s jammer flew forward from the crowd and lapped the ring, scoring five points off the bat. Richmond wound up scoring three points in the same jam.

Berkeley’s jammers circumvented the chaos of Richmond’s blockers with ease as they continued to rack up points. Five points quickly became nine, and by 10 minutes into the game the score was 31-3 Berkeley.

Essential to Berkeley’s success was their tour de force defense and unconventional approach to evading blockers. The Resistance blockers formed tight-knit groups that proved like putty for the Wrecking Belles. The Richmond jammers got stuck as they worked to cram and elbow their way through Berkeley’s blockers.

Jammers from the Resistance, however, had little trouble breaking through the Wrecking Belles’ defense. Rather than try to shove through the crowd, Berkeley’s nimble jammers chose to skip around the trouble entirely. They would wait until the Richmond blockers had crammed themselves into a tight knot, spot and an open area of the ring, and then simply hop around them. This move, the apex jump — a move where jammers jump partially out of the ring to evade the blockers — was key to their success.

The game continued with Berkeley putting up an iron-clad wall of defense from their blockers while maintaining spritely jammers capable of racking up huge points in a single jam. By halftime the score was 100-50 Berkeley.

The Richmond team, which dominated the 2014 season, proved less capable. The hometown favorite lost several of their most seasoned players in the offseason, and they had yet to find their new groove.

Wrecking Belle jammer Eva Menace, one of the teams strongest skaters, helped rack up some points in the second half of the game, but it wasn’t enough to catch up with the Resistance’s lead. With 15 minutes left in the second half Berkeley was up 151-88.

Richmond showed a strong push of determination the final minutes of the game, however. Victory was out of sight, yet Wrecking Belle #15, Scrappie, scored over 10 points in a single jam and helped the team break 100 points to end up with a final score of 102 against Berkeley’s 189.

Now 0-2 in the season the Richmond Wrecking Belles aren’t likely to make it to the championships in October, but is still one more chance to see them give it their best as they go head-to-head against the San Francisco ShEvil Dead in August.